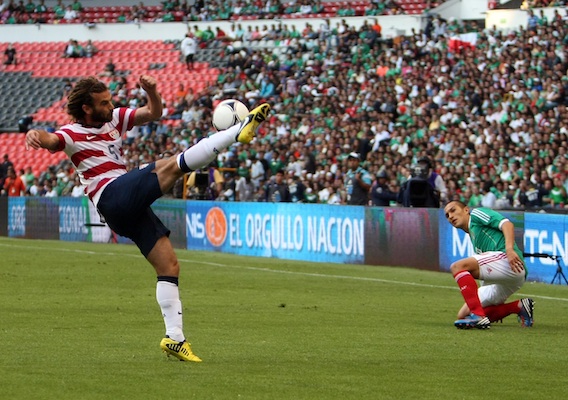 Leaving On A Jet Plane

USMNT Roster: Who's In, Who's Out So Far

The leaks are slipping out and the injuries are piling up. Here's a quick look at the players we know who are and are not heading to a USMNT camp near you. Ring, ring America.
BY Noah Davis Posted
October 07, 2012
6:00 AM

We already knew Eddie Johnson got the prized call from Jurgen Klinsmann for the upcoming matches against Antigua & Barbuda and Guatemala, but a few other names started to slip out on Saturday and early Sunday.

Kyle Beckerman: In. He struggled against Jamaica (insert dreadlock joke here), but Klinsmann likes his guile and determination. He's not the most skilled player, but it's possible he'll earn some time against A&B, especially if the field is as rough as it was in Kingston.

Brek Shea: Out. FC Dallas' young star has multiple minor injuries and the sum total will keep him from making the trip.

Landon Donovan: Maybe. The Los Angeles Galaxy midfielder hurt himself late in his club's 2-1 loss to Real Salt Lake. He stayed on the ground for a few minutes after twisting his left knee but eventually limped off the field. After the game, he said his status was "TBD." ASN prediction: He makes the roster but doesn't play in the first match, maybe even meeting the team in Kansas City for what will be a crucial fixture against Guatemala.

Finally, Aron Johannsson, who accepted a call to participate in Iceland's upcoming WCQs, pulled out with an injury. Or, in the words of ASN editor-in-chief John Godfrey, the forward "Chandlered them."