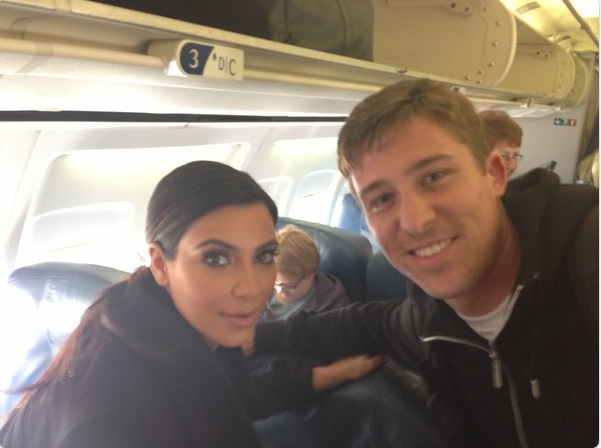 You could wait until Monday, two days before the Hex begins, to find out who’s headed to San Pedro Sula. Or, you can read below. We’ve trawled Twitter, Instagram, Facebook, and other social networks (even Friendster) for all the leaks and rumors.
BY Jon Arnold Posted
February 03, 2013
3:57 AM

1. Matt Besler tweeted a photo of himself on a plane with Kim Kardashian.
2. Kardashian tweeted she’s in Miami, which we learned from others’ retweets. (We swear. We totally don’t follow Kim Kardashian.)
3. Therefore, Besler is in Miami, where the USMNT congregates before heading to Honduras. Welcome to 2013, everyone.

Just touched down in Miami!!! Quick trip but feels good to be here!


Brad Davis was also en route to Miami on Saturday—at least according to the woman who works at the airport newsstand. (Soccer fans are all over the terminal these days.)

@ortizkicks Klinnsman may not want to say yet but I saw someone catching a flt this mrning. Wonder were hes going? #hmm twitter.com/rcastro93/stat…


Sigi Schmid doesn’t expect Eddie Johnson or Brad Evans to be back with the Sounders any time soon, which indicates the Seattle duo are also likely to be in the 23 players headed South. (That said, things are surprisingly quiet from serial call-up leaker Johnson.) UPDATE: ASN follower @ibie09 sent us this, which confirms that Johnson is/was in Florida.

Asked Sigi if he expected to see Evans and EJ in camp soon. All he said is "they aren't here now and don't expect them soon."


We also know Josh Gatt and Mix Diskerud are back in Norway, so barring criminally poor planning, don’t expect to see those two in Honduras. Gatt tried to find something to do back home while Diskerud played goalkeeper for a non-league Norwegian club.

Trying to salvage a Saturday in molde. #wishmeluck


Three hours after Besler caught a flight to Miami, Benny Feilhaber arrived in his new home, Kansas City. There's still time for him to get to South Beach, but it doesn’t seem probable.

Wheels down in Kc!! #readytogo

A couple of players made returns in the Bundesliga and showed well. Fabian Johnson went the full 90 for Hoffenheim, and we think that could lead to a call-up.


Jermaine Jones returned from suspension – and injury - for Schalke and Steve Goff expects an inclusion.


What we don’t know

Juan Agudelo claims he got 50 bags worth of groceries. If he got milk, it’ll spoil before he gets back, and that’s just irresponsible.

On the other hand, Agudelo also tweeted he was going to "go off this season." And while he's not making European money just yet, we're pretty sure he can still afford to replace any milk that goes bad. This tweet from Geoff Cameron that Brek Shea retweeted is cryptic. Airport security? While we expect Cameron to get the nod, Shea is rusty. Hmmmmm. Was Terrence Boyd just optimistic he and Edgar Castillo will meet up soon?

Looks like it because Boyd is in preseason training with his club, Rapid Vienna:

Heading back to Vienna. Goodbye Portugal

So what’s your take on what we know so far? Are you happy with the guys who are headed to Miami? Who would you call in? Also, who’s the most famous person you’ve ever met on a flight? We want to know, so leave a comment