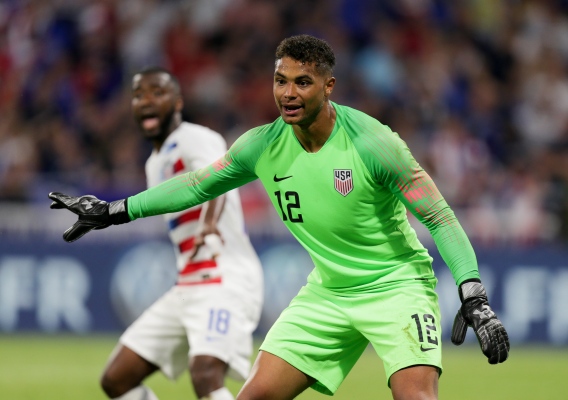 The United States national team will now return home as the players sit out the World Cup. Big changes are in store for the team in the next few months but the new young group of players have momentum after playing France to a draw in Lyon. Here is how they performed.
BY Brian Sciaretta Posted
June 09, 2018
8:05 AM
THE UNITED STATES national team played to a hard-fought 1-1 draw against France in Lyon. It was a surprising result that could give several young players a boost of confidence moving forward.

Seven of the 11 players in the U.S. starting lineup had never played for the U.S. team before last November and many are still new to the professional game. France, on the other hand, had players what star for the best teams in the world.

Friendlies do not mean anything, of course, but in terms of confidence this was an important step forward in establishing chemistry among a promising new core of players. Here is how they performed


Steffen: The Columbus Crew goalkeeper made a statement in a performance that made it clear that he is the national team’s No. 1 goalkeeper. In the second half he made a huge free kick save on Nabil Fekir. Then in stoppage time he saved Fekir again from distance and came up with another big save on Ousmane Dembele on the rebound to preserve the draw. Rating: 8.5 and Man of the Match

Robinson: The Everton-signed left back had a very good outing where he flourished in the wingback role. The U.S. attack generally did not bother France but Robinson’s speed was very useful at times. He was also very strong defensively. His stoke rose a lot over the past few weeks. Rating: 7.0

Carter-Vickers: The Tottenham Hotspur central defender was caught out of position a few times where Parker bailed him out but overall did his part to limit France to one goal. Rating: 6.5

Miazga: The Chelsea-signed central defender had a strong outing until his injury and an improved performance overall from the Ireland friendly. His game rises when the opponents step up their pressure. Rating: 7.0

Parker: The New York Red Bull central defender made a strong statement that he belongs on this team right now. Aside from a few moments like the Mbappe incident when he went to shake the PSG attackers hand after a tackle instead of playing on, Parker was very valuable on the backline and helped cover for his teammates when France applied the pressure. Rating: 7.5

Moore: The Levante right back was important in the attack – including sending in a dangerous ball on Green’s goal and setting up Wood for a goal that was called back – but was caught out of positions defensively too many times. He badly needs first team minutes to shake off the rust. Rating: 5.5

Trapp: Wearing the armband, Trapp had a tough assignment trying to defend in the midfield while help maintain possession against perhaps the best national team in the world. All things considered, Trapp had a good game. He did give the ball away on occasion but his defense was sharper than it had been in previous games. But he also helped the U.S. team settle the ball down on a few strings of possession. Rating: 5.5

McKennie: Offensively and in possession, McKennie did not offer that much and his first touch let him down at a few moments. Defensively, he helped provide some bite to the U.S. team that could match up physically with France. Rating: 5.5

Adams: The New York Red Bull was everywhere defensively breaking up plays and he covered a ton of ground. While the French players are someone of the best in the game, Adams was fearless and made a few important offensive players that helped the U.S. team in its few dangerous chances. Rating: 6.0

Green: Until the final moments of the first half, the Stuttgart attacker was struggling. On the ball he had a few bad turnovers – including one in his own half which gifted Pogba a big chance which he hit off the post. But then he put the U.S. team up 1-0 when he took a flubbed clearance from Sidibe and beat Lloris on a near post shot. Rating: 5.5

Wood: It was a tough game for Wood who was stranded but did little with the few chances he had. He should have been able to keep himself onside with the goal that was called back. Rating: 4.5

Palmer-Brown: The Manchester City signed central defender came in for an injured Miazga in the 60th minute and did well with a few important clearances at a time when the U.S. midfield was starting to crumble. Rating: 6.5

Corona: The Club America midfielder came in at the 70th minute mark but did not help the U.S. team on either side of the ball. Rating: 4.0

Sargent: The Missouri teenager had little to do after coming on in the 74th minute but helped spring a late counter attack that ended with a dangerous low cross through the box. Rating: 6.0

Villafana: The Santos Laguna left back was beaten a few times after replacing Robinson in the 82nd minute. Rating: 4.5


Sarachan: It’s hard to say the result wasn’t impressive. The U.S. team was never going to be able to take the game to France. But Sarahan made a few important decisions that gave this young U.S. team a chance to win. The five-man backline allowed the central defenders to cover for each other and it gave the wingbacks a chance to push forward. To take a young team like he had and play hard against France in Lyon is a very good job. It was just a friendly, of course, but it is a nice shot of confidence for these new players to start a cycle. Rating: 7.0