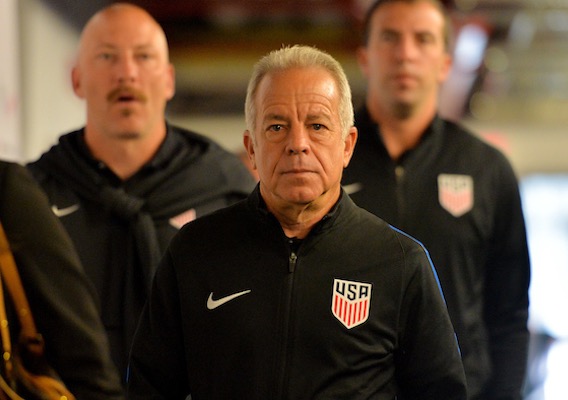 The past six months have been a difficult time for US Soccer but the federation is finally looking to get back on track and January camp will give many new players their first taste of international soccer.
BY Brian Sciaretta Posted
January 08, 2018
2:00 AM
U.S. Soccer today unveiled a 30 player roster for the annual January Camp to take place this month in California. The camp will open this Thursday and continue ahead of its friendly against Bosnia & Herzegovina on January 28.

The camp will be overseen by interim coach Dave Sarachan who has been running the team since Bruce Arena resigned following the team’s failure to qualify for the 2018 World Cup.

As expected, the roster is very inexperienced with many of the players having taken part if youth national teams. Four were members of the 2017 U-20 World Cup team and a total of 12 players have played in a youth World Cup.

Of interesting note is that FC Dallas elected not to release its players for this camp so that is why Kellyn Acosta and perhaps Matt Hedges and Jesse Gonzalez were not released.

“The Youth National Team programs have been very successful this year, which is very promising,” Sarachan said. “This past year our U-17 and U-20 Men’s National Teams each reached the quarterfinals of a World Cup and we’re thrilled to have 12 players that have been part of Youth World Cups and four of which are coming off the U-20 World Cup with us this year in January Camp.”

“Overall we’re excited by the fact that we have a lot of young players,” Sarachan added. “Twenty-one of these players are 24 years old or younger and 19 have been part of our Development Academy program. We’re doing a lot of good things at the youth level. We feel we have a lot of talent coming through and we’ll have a look at many of them at this January Camp.”

This camp comes on the hands of a stinging report that Jonathan Gonzalez was going to leave the U.S. program permanently and opt to play internationally for Mexico.