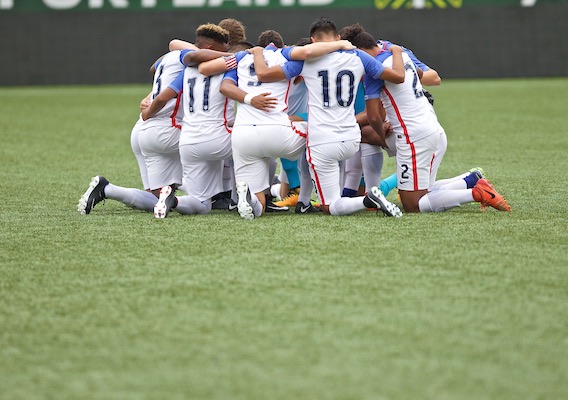 John Hackworth's Under-17 squad defeated the hosts in their opening match of the World Cup. They'll need to be better going forward, but you can only win the games you've played.
BY Brian Sciaretta Posted
October 06, 2017
10:30 AM

The United States U-17 national team opened up its 2017 World Cup with a convincing win over hosts India at Jawaharlal Nehru Stadium in New Delhi. The U.S. team should have won the game by more as its finishing was off but the talent gap between the two countries was wide.

Entering into the game, the United States was the heavy favorite over India but host countries can be tricky at World Cups, particularly in opening games, as teams are typically full of emotion and pride.

The United States should have scored in the fifth minute when Tim Weah played Josh Sargent past the defense but India goalkeeper Dheeraj Moirangthem came up with the big save.

In the 33rd minute the United States finally took the lead after Josh Sargent was brought down by India’s Jitendra Singh. Sargent took the ensuing kick and went left as Moirangthem guessed the other way. With that goal, Sargent gave the U.S. team a 1-0 lead and has now scored in both the U-20 and U-17 World Cups in the same year.

In the opening minutes of the second half, Andrew Carleton nearly gave the U.S. team a 2-0 lead when he had an open shot inside the box but his low shot was met with a diving save from Moirangthem.

But in the 51st minute, DC United’s Chris Durkin gave the United States a comfortable 2-0 lead when he took advantage of a bad touch on an attempted Indian clearance off a corner kick and unleashed a shot that took a deflection but beat Moirangthem regardless.

The United States should have had its third in the 61st minute when Carleton hit a beautiful pass down the right side for Ayo Akinola who had only to the keeper to beat but hit a very poor chip with his attempt.

But India continued to press and took advantage of some sloppy defending from the U.S. team to come very close to scoring.

One such opportunity came in the 84th minute when India hit the crossbar with a shot. But India did not have defenders back to guard against a quick counterattack. After hitting the post, the U.S. collected the ball and sprung forward. George Acosta hit a magnificent ball into Carleton who rounded Moirangthem and easily finished for a 3-0 lead which is how it would end.

Three Thoughts on the match

Chris Goslin was the Man of the Match
It was a good game for the Atlanta United duo of Andrew Carleton and Chris Goslin who both played well.

After a quite first half, Carleton came to life and was outstanding in the second half where he had a goal and should have had an assist.

As good as Carleton was, Goslin was the player of the game. His distribution out of the back was important as the U.S. team took the game to India. With better finishing, this game would have been over quickly. But Goslin showed outstanding technique and ability to control the game in the midfield.

Acosta was great off the bench
In the second half, John Hackworth brought on George Acosta in the midfield and the team followed better offensively. Acosta can be streaky but he made a strong case as to why he should start in the No. 10 position when the games become a lot harder after today. Acosta’s assist to Carleton late in the game was perhaps the best play of the entire game.

But the games ahead will be different. Ghana and Colombia are a lot more talented and that could help the U.S. team out. India bunkered hard from the start. Ghana and Colombia will not and that should provide for a more open game and a situation where Acosta will be even more needed and valuable.

The U.S. must play better to beat Ghana
This was a good win. Host countries can be tough at World Cups and the U.S. did its best to not get rattled in a hostile environment. But this level of performance will not get three points against Ghana on Monday or Colombia on Thursday.

Josh Sargent scored one goal today on a penalty he created. He should have had more but final passing and field vision was lacking to either spot him making dangerous runs or completing passes to him. Weah had one pass in the fifth minute but that was about it. India worked hard to defend Sargent and foul him if necessary knowing he is one of the most talented players at this tournament. But the U.S. needs to figure out how to play the ball into Sargent in the final third.

Finally, the defense of this team was as shaky as advertised. There is no question there is a lot of skill and technique on this team but as Tab Ramos told ASN last week, the team could struggle defensively. India created several dangerous chances that could have easily been stopped early.

Perhaps Hackworth will be playing with better defensive approach in the games ahead knowing the more talented opponents? Either way, this team will go as far as its defense takes it.