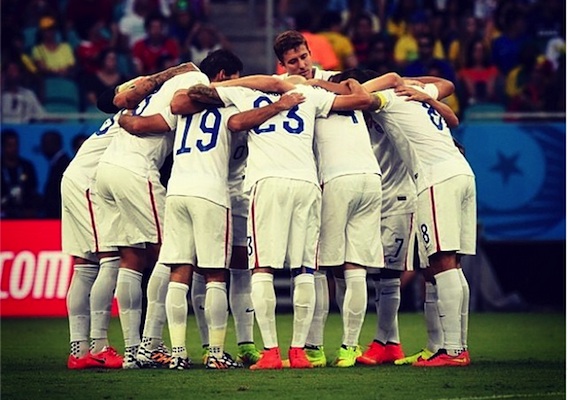 The Yanks may have been eliminated in the round of 16, but that hasn't stopped them from discussing their experiences in Brazil. Here's this week's collection of the 10 best U.S. national team tweets.
BY Justin Churchill Posted
July 07, 2014
11:28 AM

Thank you for capturing the hearts of America boys. If you aren't proud of this team, I hate you.

It's not just 23 men on the roster who fought in Brazil, it took a lot of work to get there.

Thats why we always have a chance. Guts, fight and the American Spirit. Well played @ussoccer ! #ProudAmerican

The only person on the planet who has more optimism than Jurgen Klinsmann.

Proud of those boys. Left it all out there on the field. No denying American soccer is here to stay!!! #usa

This is a real 4th of July party if I've ever seen one.

The future is bright...

Sometimes you lose, sometimes you win, but the most important thing is that you keep your head up.… http://t.co/TTn0HJTRv1

A double dose of Dax this week.

Mathieu Valbuena... More often than not, I feel your pain man. #cantseeovermykid pic.twitter.com/Z8ymNsovBc

Happy 4th of July! Couldn't be more proud to be from and have the chance to represent this country. Enjoy the day! #USA

Thanks Brazil for the memories. Also big shout out to the USA fans for keeping it 100. #1N1T http://t.co/rBA2RwYjE0

We need to believe as a nation as we did the past few weeks that we CAN compete. The tide is turning and the world has taken notice. #1N1T