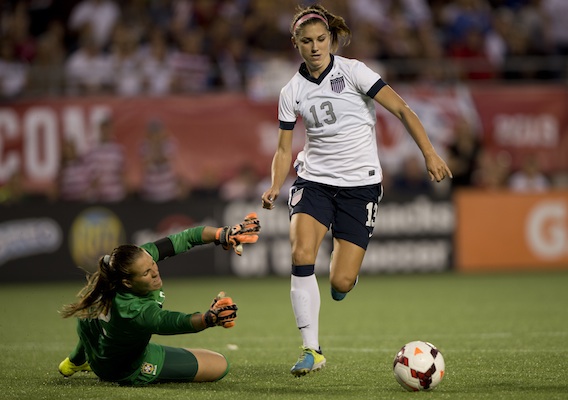 American Soccer Now will be expanding its women's soccer coverage in 2014, starting with this debut article by John Halloran. Please welcome him into the ASN fold.
BY John D. Halloran Posted
January 15, 2014
1:05 PM
DESPITE REMAINING MOSTLY out of the limelight in 2013, the United States women’s national team was nonetheless hard at work, holding nine training camps, winning the Algarve Cup, and compiling an impressive 13-0-3 record. As the team opens up its 2014 campaign, it is once again in camp, preparing for upcoming friendlies against Canada on January 31 and Russia on February 8. The 2014 calendar will culminate in November with the CONCACAF World Cup qualifying tournament, which features three spots in the 2015 Women’s World Cup up for grabs. In his first year in charge of the squad, head coach Tom Sermanni has used the U.S.’s camps and games to vet a host of new talent. New faces are emerging and old ones fading as the team transitions from the squad that took second at the 2011 World Cup and gold at the 2012 Summer Olympics to the team that will compete in Canada next summer. In total, Sermanni looked at 44 players in 2013, but as the coach of the best and deepest team in the world, he will have many difficult decisions in paring down the squad to his final 23-player roster. Here’s a breakdown, by position, of who’s likely to be on the team.

Barring injury, the first two spots at goalkeeper are locked down by Hope Solo and Nicole Barnhart. Solo is arguably the best goalkeeper in the world and Barnhart, though often in Solo’s shadow, is a capable international backup. Barnhart helped the team to World Cup qualification in 2011 when Solo was out after shoulder surgery, and Barnhart also picked up two shutouts in this year’s Algarve Cup (including in the final against Germany) which Solo missed due to a wrist injury. The tough choice for Sermanni on the goalkeeper front will be for the third spot on the roster. The battle is likely to be between Ashlyn Harris and Jill Loyden. Loyden was on the 21-player roster for the 2011 World Cup, but dropped for the 18-player roster in the London Olympics (she was an alternate). In 2015, the roster for each team has been expanded to 23 players. Harris has kicked back and forth between Europe and the U.S. in recent years. She played for both the Washington Freedom and the Western New York Flash in the WPS before the league folded and in 2013 played with the Washington Spirit in the NWSL. She has also played for Duisburg in Germany and, returning to Europe after this year’s NWSL season, helped lead Swedish side Tyreso to the quarterfinals of the Champions League. Virtual locks: Solo, Barnhart
Inside track: Loyden
Still in the hunt: Harris

At center back, the U.S. can count on returning veterans Christine Rampone, Becky Sauerbrunn, and Rachel Buehler. Newcomer Whitney Engen, who recently helped lead Liverpool to a title in England and is currently part of the American contingent at Tyreso, also looks to be a lock. Engen earned eight caps under Sermanni in 2013 and should be in a battle with the other U.S. vets for a starting spot. At outside back, the U.S. has veterans Ali Krieger, Kelley O’Hara, and upstart Crystal Dunn. Krieger and O’Hara both have extensive international experience while Dunn put herself on the map with a stellar 2012. During those 12 months Dunn won the U-20 World Cup, the Hermann Trophy, and an NCAA Championship with the University of North Carolina. She also managed to earn eight caps with the U.S. women's team in 2013 despite her UNC obligations. With Sermanni likely to take eight defenders, that leaves one spot left and many qualified candidates. Amy LePeilbet is a World Cup and Olympic veteran, but has been out most of the past year recovering from an ACL injury. Stephanie Cox, who was on the 2011 World Cup team, but not selected for the London Olympics, was also recently given her first call-up under Sermanni. There are also several newbies who will be in competition for that last spot, including Meghan Klingenberg, Kristie Mewis, and Julie Johnston. Mewis seems to be a Sermanni favorite, earning 10 caps in 2013, but as a converted midfielder, questions remain about her defensive abilities at the international level. Klingenberg was an alternate on the Olympic team and has earned four caps under Sermanni in 2013. Johnston, who pushed her way into the mix by captaining the U-20 team to its World Cup win in 2012, earned two caps in 2013, but is still a long shot to make the team. (She can also play in the midfield.) Virtual locks: Rampone, Sauerbrunn, Buehler, Engen, Krieger, O’Hara
Inside track: Dunn, Mewis
Still in the hunt: Klingenberg, LePeilbet, Cox, Johnston

With so much veteran talent available, spots in the U.S. midfield will also be at a premium. Carli Lloyd, Lauren Holiday, Megan Rapinoe, Tobin Heath, and Heather O’Reilly are all World Cup and Olympic veterans firmly ensconced in the team. From there, a lot will depend on how Sermanni tackles the likely loss of Shannon Boxx. Boxx is currently pregnant and 36-years-old. She also battles lupus and underwent knee surgery in the spring. Overcoming all of those obstacles to make it back for the 2015 World Cup is unlikely, and, assuming she doesn’t return, there will be a giant hole in the U.S. midfield. Former coach Pia Sundhage attempted to fill that hole by playing Lloyd and Holiday in the midfield together, with uneven results. Both Lloyd and Holiday are among the best attacking midfielders in the world, but not having a true No. 6 in the lineup has led to gaps between the defense and midfield and put undue pressure on the back line. If Sermanni decides he needs a true holding midfielder, he could opt for Amber Brooks, who earned her first cap against Brazil in November and has recently been playing in Germany for Bayern Munich. Yael Averbuch is another potential candidate and has become a regular for the U.S. in 2013, earning 10 caps. If Sermanni takes both Brooks and Averbuch, one spot would be left in the U.S. midfield, with Erika Tymrak and Morgan Brian the most likely candidates. Tymrak turned a stellar 2013 with FC Kansas City into a chance with the U.S. national team and earned two caps late in the year. She also scored a beautiful goal against Brazil in November. Brian, still a junior at the University of Virginia, earned three caps for the U.S. in 2013 while leading the Cavaliers to the College Cup and winning the Hermann Trophy for herself. Virtual locks: Lloyd, Holiday, Heath, Rapinoe, O’Reilly
Inside track: Averbuch
Still in the hunt: Brooks, Brian, Tymrak

As good as the U.S. is everywhere else on the pitch, it is deepest at forward, featuring four of the best strikers in the world. The accomplishments of Alex Morgan and Abby Wambach are well known, and Sydney Leroux is playing so well that Sermanni is going to have a serious selection headache ahead of him. That’s to say nothing of Christen Press, who scored 29 goals at the club level in 2013 for Tyreso. With Wambach, Morgan, Leroux, and Press, there likely won’t be room for anyone else, but there are a number of players waiting for their chance. After missing all of 2013 due to pregnancy, Amy Rodriguez is now back in camp with the national team. Lindsey Horan, who skipped out on a scholarship with the University of North Carolina to jump directly to French side PSG, is also in the mix. Finally, Sarah Hagen, who plays with Bayern Munich, is currently in her first U.S. camp under Sermanni. Virtual locks: Wambach, Morgan, Leroux, Press
Inside track: No one
Still in the hunt: Rodriguez, Horan, Hagen Who would you like to see on the 23-player roster? Did we leave off any names that merit consideration? We welcome your feedback in the Comments section below. John D. Halloran is an American Soccer Now columnist. Follow him on Twitter.