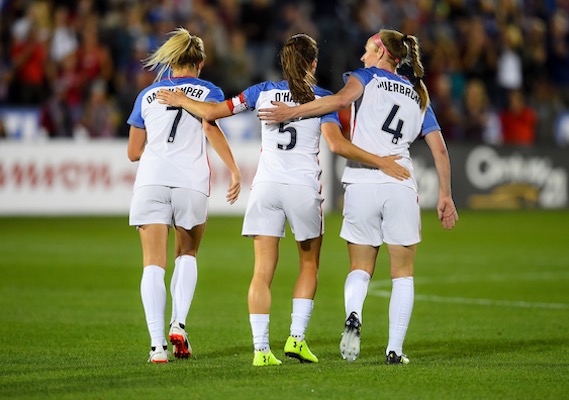 The Americans didn't lose, but their rivals to the north exposed a backline that continues to struggle in specific ways. John Halloran has a recap and thoughts about going forward

In the first of two November friendlies, the United States women’s national team played Canada to a 1-1 draw in Vancouver on Thursday night.

From the opening whistle, the Canadians proved they were up to the fight, contesting every inch of the field and pressuring the Americans in every phase of play. Despite the fact that the U.S. used the same 4-3-3 that resulted in a six-game winning streak going back to the summer and that Julie Ertz remained the lynchpin of the midfield, the Canadians managed to not only stymie the American attack but create plenty of their own problems.

Head coach Jill Ellis deployed Lindsey Horan and Sam Mewis in the two central midfield roles in front of Ertz—the coach’s two most in-form options at the position. The duo, however, struggled to connect passes and build play out of the back under the heavy Canadian pressure. Mewis, coming off an exceptionally strong year for both club and country, played uncharacteristically poor and gave the ball away repeatedly with bad touches and misplaced passes.

Alex Morgan scored the lone American goal in the contest when she slotted home a loose ball 30 minutes into the contest. Although the striker failed to generate much more in the attack on the night, she played her hold-up role well as she endured foul after foul with the U.S. attempting to build out of the back.

In the second half, Adrianna Leon found the equalizer for Canada when she finished from close range on a loose ball opportunity of her own following a corner kick. In total, the Canadians probably deserved more on the night. Over the course of 90 minutes, they outshot the U.S. 19-11 and only a strong performance from American goalkeeper Alyssa Naeher prevented them from doing more damage and claiming the win.

In addition to its struggles in midfield and on the attack, the American defense also slipped up on numerous occasions on Thursday with the most disturbing breakdowns occurring on the right side.

In the 35th minute of play, Kelley O’Hara lost track of Leon, who coasted unchallenged into the gap between O’Hara and right center back Abby Dahlkemper for an open opportunity. Naeher managed to block the shot—although she clearly knew nothing of it—and O’Hara then blocked the follow-up shot taken on the now open net.

After the break, O’Hara lost track of Leon again in the 48th minute, and the Canadian attacker beat Dahlkemper on the dribble before O’Hara once again worked her way back into the play.

Then, in the 84th minute, Taylor Smith—who entered the game at right back 15 minutes earlier—lost track of Maegan Kelly, who skirted in unmarked. She found herself in alone on Naeher, who managed to get just enough of the shot to redirect it off the post.

The lapses in Vancouver have become part of a recurring pattern of missteps on the right side of the U.S. defense. Dahlkemper has ingrained herself in the lineup of late, starting the last nine games in a streak that goes all the way back to June. She also won NWSL Defender of the Year honors this season at the club level and, at her best, is certainly capable of getting the job done.

But she struggled in the October friendlies against South Korea and hasn’t yet seemed to find a working partnership with the cadre of right backs whom Ellis has rotated in beside her. Those lapses, especially in communication, have starting to give opponents real opportunities and must be cleaned up as the team moves ahead.