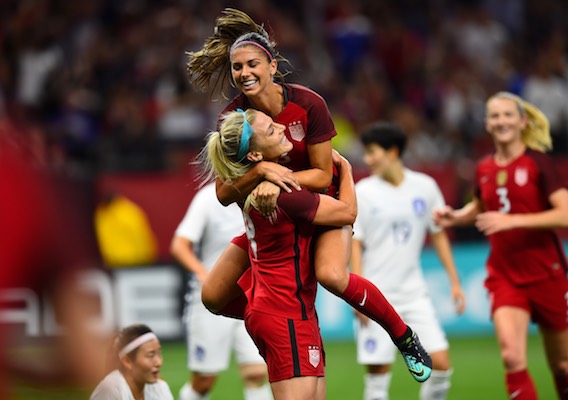 The Americans drew first blood in the contest when Julie Ertz headed home on a corner kick to open the scoring in the 24th minute of play. Alex Morgan then doubled the lead in the 40th minute when she took down a Kelley O’Hara service and smashed in a shot from close range.

South Korea got one back seconds before the halftime whistle, but the U.S. picked up a third goal via a Megan Rapinoe penalty in the second half to close out the scoring and seal the result.

While the game had its fair share of chippy, physical play and the Americans wasted more chances than they would’ve liked, the match once again showed the benefits of the U.S.’ newly adopted 4-3-3. In the first half, the midfield combination of Ertz, Andi Sullivan, and Sam Mewis kept the midfield compact defensively and dangerous in the attack while the Americans’ three forwards found plenty of space on the flanks.

The match was also the first in a year for Sullivan, who cut her teeth with the national team last fall before tearing her ACL at the tail-end of her junior college season with Stanford.

The use of Ertz as the team’s holding midfielder has continued to pay dividends since head coach Jill Ellis first used her there at this summer’s Tournament of Nations. In the position, Ertz is a solid ball winner who frees her midfield partners to roam into the attack while also providing her center backs enough cover to allow the outside backs to fly forward on the flanks.

The combination of the two—both as a result of Ertz’ new position—has provided the U.S. with an attacking spark largely absent since the 2015 World Cup. On Tuesday, O’Hara, a fullback, took full advantage, playing a part in the build-up on all three goals.

On the flip side, there were a few negatives on the night. Mallory Pugh went down with an apparent hamstring injury, adding herself to a long list of key players on the mend alongside Tobin Heath, Rose Lavelle, Morgan Brian, and Taylor Smith.

The U.S. defense also got caught out on two separate occasions when they failed to pressure shots from distance. One of those ended up in the back of the Americans’ net when Han Chae-rin turned Abby Dahlkemper—who ironically was named National Women’s Soccer League Defender of the Year today—twice on the same play. The other shot from distance narrowly missed, pinging off the post.

Overall, however, the Americans put forth a positive performance and remained on the front foot for the vast majority of the match. While no one will consider the 15th-ranked South Koreans world beaters, the U.S. played well for its fourth consecutive game and looks to be headed in the right direction half a year ahead of World Cup qualifying.