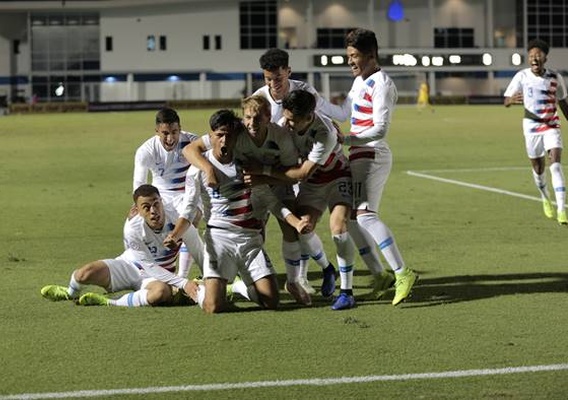 U.S U-20 team qualifies for World Cup with a 4-0 win over Costa Rica

The team coached by Tab Ramos has now won all six of its of its games at the 2018 U-20 CONCACAF Championships by a combined score of 43-2.

The U.S. team opened the scoring in the 15th minute with an outstanding goal. Mark McKenzie hit a perfect line-splitting pass to Alex Mendez and the new SC Freiburg signee scored one of the best goals of the tournament with a beautiful shot from distance.

It was the best and worst of times for Ulysses Llanez who doubled the U.S .team’s lead in the first half but was forced out of the game in the 27th minute due to injury. It was Llanez’s seventh goal of the tournament.

The U.S. added two second half goals to turn the game into a rout. Juan Pablo Torres score from close range on a low cross from Ayo Akinola and later Akinola finished the scoring on a very nice header off a Mendez free kick.

The U.S .team will face Honduras on Monday night and a win or draw will send it to Wednesday night’s Championship game.

It is the fourth straight appearance in the U-20 World Cup for Tab Ramos since he was hired in 2011. After a group stage exit at the 2013 World Cup, the team has advanced to the quarterfinals in 2015 and 2017.

Mendez is the MOTM


Without a doubt, Alex Mendez was the best player on the field and perhaps the best central midfielder of the entire tournament. You will rarely find a nice goal at the youth level than Mendez’s strike in the 15th minute.


This is absolutely insane from Alex Mendez. USA closing in on a spot in the 2019 U-20 World Cup pic.twitter.com/2ynFE3gkLB

With Mendez, the U.S. team has a chance for a lot of success in Poland. This doesn’t even include the addition of Richard Ledezma or Chris Durkin to the mix. There are a lot of qualify midfielders in this age group (and not even including Tyler Adams).

CONCACAF soccer is often ugly and brutal. Despite the U.S team making beautiful plays and playing attractive soccer, the referee lost control and the U.S team was on the wrong end of some horrible challenges – that could have been red cards.


Before Uly Llanez was subbed out with his injury, he scored this goal to give the US team a 2-0 lead on Costa Rica in U-20 WC qualifying pic.twitter.com/IYPvXOmWTT

The victory was costly. Jaylin Lindsey was forced out of the game with an injury in warmups and Ilysses Llanez could not continue after his 27th minute injuries. Chris Gloster took the most abuse out of any player and trainers had to help him off the field twice. Mendez also looked questionable after being on the end of late tackle in the second half.

It remains to be seen who will be able to go on Monday but soccer in this region has an element of danger that is beyond what the game should be.

No drama this time

Every U-20 World Cup qualifying campaign usually has some drama. In qualifying for the 2013 World Cup, the U.S. team fell behind Canada early in its decisive quarterfinal before rallying to win. In 2015, the U-20 team opened with a draw to Guatemala and a loss to Panama to find itself in jeopardy. In 2017, the U.S .team lost its opener to Panama and then fell behind to Haiti to start its second game.

In qualifying for 2019, there was never any drama. It was the easiest qualifying campaign ever for the U.S. U-20 team.

There is a lot of confidence in this team and its refreshing to see a U.S .team eager to never let its opponents into the game.