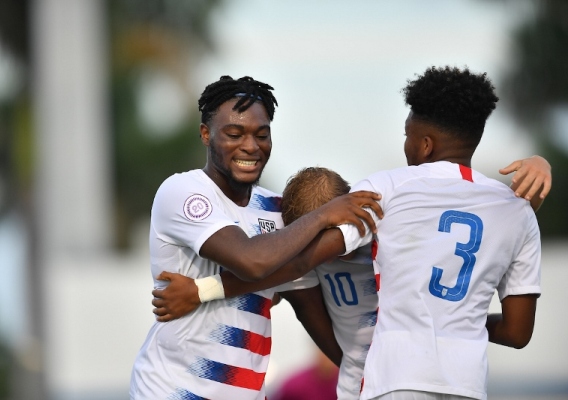 The United States U-20 team is off to a solid start in World Cup qualifying with an easy win over Puerto Rico and no noticeable injuries. ASN's Brian Sciaretta has been covering the team all cycle and here are his thoughts on the game.
BY Brian Sciaretta Posted
November 01, 2018
4:00 PM
THE UNITED STATES U-20 national team cruised to a lopsided 7-1 win over Puerto Rico in the opening of its World Cup qualifying campaign in Bradenton, Florida. When playing against an overmatched opponent, the U.S. took the important step of scoring early to ensure an easy win.

When the talent gap is so wide between two teams, it is misleading to read too much into the game. But here are a few quick observations.


The most impressive performers for the U.S team were Indiana forward Justin Rennicks, SC Freiburg midfielder Alex Mendez, and FC Dallas Paxton Pomykal. All three of those players did the most to take Puerto Rico out of the game early.


US U-20’s take a 1-0 lead over Puerto Rico. Mendez to Pomykal who plays to Rennicks but I believe it’s an own goal pic.twitter.com/IapyMbCf9U

Of course Ayo Akinola and Ulysses Llanez got involved later to ensure the route but the most important plays for the U.S. team were to make it clear that Puerto Rico was not going to hang around in a close game.

Rennicks looked solid in his hold up play, passing, and movement. Mendez showed why he is the best midfielder in and advanced/attacking position. Pomykal simply had a field day and connected well with everyone – scoring once, assisting on another, making a key initial pass on the opening goal, and then drawing a penalty.

It should be mentioned that Pomykal’s spot on the team was questionable before the final roster was named and he was helped by Atlanta’s sudden decision to not release Andrew Carleton. If Pomykal wants to make a case to head coach Tab Ramos that he shouldn’t be dropped for another player in the tournament’s second stage (should the U.S. team make it), today was important.


Pomykal is having a good game. Forced an own goal for the team’s first and now scored the third. 3-0 pic.twitter.com/c40sE09Ngi

Areas still to work on


Despite the comfortable win, there are still areas Ramos will see that need improvement. Coming into this tournament, the central defense was a concern given that Chris Richards was not released and Mark McKenzie was only able to join the team early on Tuesday after Philadelphia’s playoff loss on Wednesday night.

Sam Rogers and captain Matt Real (normally a left back) had to fill in in central defense and Ramos went with two No. 6 defensive midfielders in Brandon Servania and Juan Pablo Torres to try to cover. The goal that Puerto Rico scored to close the gap at 3-1 showed how thin this team can be when everyone is not available in the back.

The addition of McKenzie will help when the opponents become more difficult but having Richards available in the second stage is something that Ramos will probably really want. It’s not deep and a second-choice lineup in the back affects how the entire team has to play.

Aside from the backline, the U.S. team never looked particularly dangerous on set pieces. In close CONCACAF games, that can often be the difference between wins and losses so it will need to improve, especially in the second stage if the U.S. team makes it.


Next up for the United States is the U.S. Virgin Islands on Saturday which lost today 13-2 to Surname. A comfortable win should be expected although Ramos will probably make as many changes to the Starting XI as he possibly can.

With games coming every other day, there is a lot of roster strategy for Ramos. What games does he want to have his best lineup? Can he avoid spending too much energy in easy games in order to avoid injury and be fully prepared for the harder games?

Against the U.S. Virgin Islands, the a very different U.S. team will try to ensure a comfortable win early and probably take their foot off the gas and avoid dangerous and potentially injury situations on the field.

Only 48 hours after the USVI game will be Trinidad & Tobago which is probably the game where Ramos most wants to select his top lineup (followed closely by the finale against Suriname on November 9). This is a tricky tournament for Ramos to manage in terms of keeping the team fresh and fit but an easy opening win and a likely weak opponent in the second game is a good way to start.