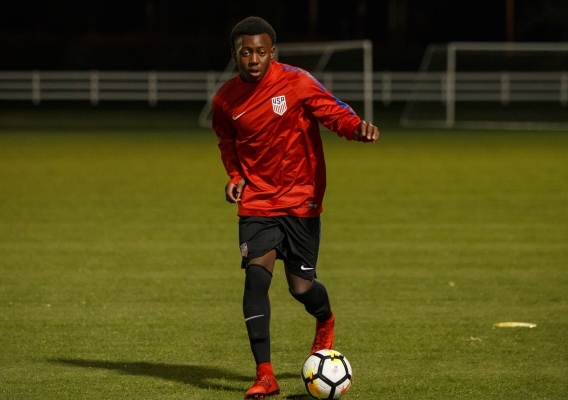 U.S U-17 standout George Bello eyeing a breakthrough with Atlanta

George Bello has long been a key player for U.S. youth national teams for years. Now the Nigerian-born left back is hoping to step in the spotlight with Atlanta United, the U.S. U-17 team, and perhaps even the U.S. U-20 team over the next year.
BY Brian Sciaretta Posted
August 15, 2018
9:00 AM
THE LAST few seasons has seen exciting developments from young American players like Christian Pulisic, Tyler Adams, and Weston McKennie. But with those players soon to leave their teenage years and become key national team contributors this cycle, another wave of American players aims to follow in their footsteps.

Key among this group is Atlanta United left back George Bello. At 16, he is currently one of the best players on the U.S. U-17 team and is on the cusp of breaking into Atlanta United’s first team where he is training with the first team and made the bench in the most recent game.

“It's great at Alanta,” Bello told ASN from Atlanta. “We get a lot of opportunities for sure - whether it be training with the first team and being able to compete on a level they're at. You get a chance to show yourself. It's a really great process because you never know when your time will come.”

Atlanta United is one of the most ambitious clubs in MLS. The team has invested heavily younger designated players and is managed by former Barcelona boss Tata Martino. Unsurprisingly, it has the best record in the league. Its academy is well funded and the first team plays in front of enormous home crowds.

Since being promoted to the first team, Bello has fit in well and has found his way into the team’s tight-knit group of players.

“It's a really great group because we're all really close,” Bello said. “The more experienced guys really help out the younger kids. If you have a question, they'll be right there to answer it. They're always there and they have your back, no matter what. It's a very comfortable place and you never feel like you're left out.”

One of the veteran players Bello is closest with is U.S. international Gregory Garza, 26, who also plays left back but who is currently injured due to shoulder surgery. Garza has been around top young players since he developed at Sporting CP where he was part two consecutive Portuguese U-19 championship winning teams.

“George is another one of those guys I really think can come up through the ranks and put his name out there over the next few years,” Garza said. “You sometimes have to pinch yourself and realize he is just 16 with all that potential. The maturity he has is also impressive. He's very down to earth and responsible - he's one of the first ones there every day. He couldn't be at a better place. These people in Atlanta see a lot of potential and the rest of us as professionals see it as well. The guys around him kind of guide him towards the right ways and get him into the professionalism of what it is all about with the sacrifice and all those little details it takes to be where we are.”

As Atlanta prepares for its stretch run, it is unclear right now when Bello’s chance will come. But with the team thin at fullbacks at the moment and he might see the field sooner than later.

Whenever Martino puts him into a game, Bello believes he will be ready to handle the increased level of play and has been working all year for the chance by playing for Atlanta 2 in USL and training with the first team – which he has done since preseason.

“I think it is getting to the strength of things, I am getting myself into the pace of the game because it is a whole different level from the first team and academy or USL,” Bello explained at what he has been working on in preparing for the jump to the first team. “I'm getting into the grove of things and I think I am doing pretty well. Besides that, it is the little things like working on my right foot or things like that.”

“Atlanta 2 has been a great addition because it’s a place where you can develop yourself at a very high level,” he explained. “There is great competitions but they also install a great work ethic so even though you are not on the first team, it is still at a point where you can get better as a player, and keep competing until you get your chance.”

Atlanta United’s academy director Tony Annan stresses that he sees an enormous upside in Bello but also realizes that his development is crucial for the club’s coaching staff to get right. If the club handles Bello’s development well, the English-born Annan believes it will pay big dividends for Atlanta and American soccer as a whole.

“For George, he's one of those players who has the 'X factor,’” Annan said earlier in the year. “He has the right attitude, he's humble, he's grounded, he's technical, he's athletic. He still has a lot of development to go where he must overcome his deficiencies and as a club we have to manage that with the academy, USL, and the first team. For me, he's a special player who has all pieces. We have to polish them up and educate him to make him a smarter player. But he's one of the most exciting prospects in the USA, in my opinion.”

Like many players of his generation, Bello had different options as to where to begin his career. Bello doesn’t hide his eventual European ambitions but is happy at this point in his career with Atlanta United, its players, and its coaching staff.

“Personally and mostly because it's my hometown,” Bello said of signing with Atlanta United in 2017. “But also because MLS is a great place to start for young players because it's a great place to get your feet on the ground, get used to playing, get known, until when the time comes when maybe a European team wants you.”

Born in Abuja, Nigeria, Bello and moved to the Atlatna area in the United States when he was just one year old. His father, an amateur player, instilled in George the love for soccer when he was very young. He looked up to players like Neymar and Messi but also developed a love for the left back position and would frequently watch videos on David Alaba and Marcelo to learn the position.

Over the past few years, Bello has made inroads with U.S. youth national teams and was a key part of the U-15 squad that won the prestigious Torneo Delle Nazioni in 2017.

But the next year will offer milestone opportunities on a bigger scale. In addition to his potential first team debut, Bello will likely have the U-17 World Cup in Peru. In an even more ambitious goal, Bello is also hoping to make a push for the U-20 team and play in both youth World Cups in one year like Josh Sargent did in 2017

“The team has a lot of talent and we have the potential to do a lot of great things in World Cup qualifying or the World Cup,” Bello said of the U-17 team. “We have a lot of potential and we have that character to be one of the best teams.”

“I always dream big, hope big, and believe I can do the best I can do,” he continued. “If the opportunity [with the U-20 team] comes, of course I'll go and I am working hard for it. But whatever they believe is the best for my future, I'll be with them.”

John Hackworth recently left the position as U-17 head coach but believes Bello has the attitude to go far with U.S. Soccer.

"I like George as a person as much as I like him as a player," Hackworth said. "He is humble, hungry, and confident. He is not afraid of constructive criticism. He takes it at works to improve."

The disappointment of the United States national team in failing to qualify for the 2018 World Cup still lingers but the exciting progress of young American players has helped turn the page and allowed fans to focus on the future instead.

As an immigrant, Bello takes special pride in playing for the United States and acknowledges that the setbacks of last year have put a greater spotlight on youth national teams and he is enjoying the opportunity.

“Of course it was a big disappointment but it could be a great note that the next generation is coming,” Bello said. “It put a lot of attention on the U.S. youth national teams, which I like. It's opening the door to more chances so we can get opportunities and show what we could do next time around. Even though it was a big disappointment, it put the spotlight on the younger players. The United States is my primary home - I've known this my whole life. I always love to play for it and any time I get the chance, I play with all my heart.”