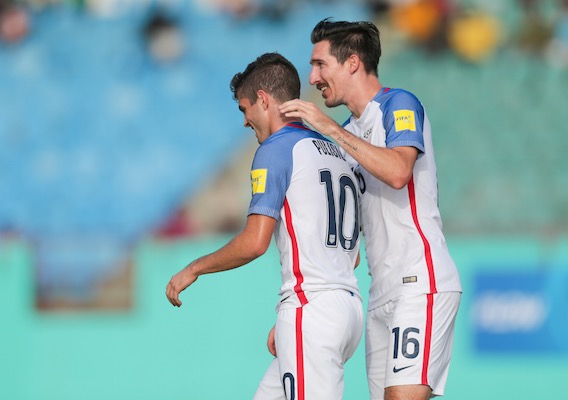 Christian Pulisic scored a pair of goals and four other Americans got on the scoresheet in this semifinal round World Cup qualifier, moving the Yanks a bit closer to the Hexagonal tournament.
BY John Godfrey Posted
September 02, 2016
4:30 AM

IN ITS TWO MOST RECENT OUTINGS, the U.S. men's national team faced the No. 1 and No. 3 teams in the world, and it showed. The U.S. lost those games by an aggregate 5-0 score, and Jurgen Klinsmann's men looked particularly helpless in a 4-0 thumping against Argentina in late June.

Friday's semifinal round World Cup qualifer against FIFA's 156th-ranked team offered the squad an opportunity to play the bully. And it did.

The United States defeated St. Vincent and the Grenadines, 6-0, in front of a sparse crowd at Arnos Vale Stadium, a cricket field located on St. Vincent. If Trinidad & Tobago defeats Guatemala later tonight, the United States will advance to the Hexagonal round of World Cup qualifying with one game remaining.

The Yanks looked bright from the opening whistle but failed to take an early lead.

Bobby Wood had a breakaway chance in the second minute when Fabian Johnson sent him in alone on St. Vincent and the Grenadines goalkeeper Lemus Christopher. Wood had plenty of time, picked out his spot, and attempted a left-footed shot to the far post. But his poorly struck ball rolled into Christopher's outstretched arms and the U.S. missed out on a glorious chance to jump ahead.

SV&G had a chance of its own in the 26th minute as Oalex Anderson broke free on a free kick and nodded the ball on frame, but Brad Guzan stopped it easily.

Jozy Altidore, wearing the armband, initiated the action on the United States' opening goal in the 27th minute. With the ball at his feet on the edge of the penalty area, Altidored found Johnson, who in turn delivered a simple pass to Wood. The Hamburg striker curled his right-footed shot into the back of the net.

The Americans didn't even both to celebrate the goal—a clear indication of its expectations in the contest and perhaps a sign of its disappointment for taking that long to tally.

The U.S. doubled its lead four minutes later when Matt Besler got on the end of an errant SV&G clearance and snapped a left-footed shot from close range into the back of the net. This time the Americans did celebrate—a choreographed rock-the-cradle circle in honor of Besler's newborn child.

Congrats to @MattBesler and his wife Amanda on welcoming a new member of the team today! #USMNT pic.twitter.com/KqXXkyQnlj

The U.S. put the game out of reach two minutes before intermission when a streaking Wood was thumped in the penalty area on another breakaway chance. Altidore stepped up to take the penalty and blasted it straight down the middle and into the back of the net to give the Americans a 3-0 lead.

A highly motivated St. Vincent and Grenadines side made a tremendous push in the opening minutes of the second half and managed to put two balls behind Guzan before the hour mark. Unfortunately for SV&G, it was whistled offside on both strikes—correctly, replays seemed to indicate—and the Americans retained their three-goal cushion.

Whether winded or frustrated—or both—the Caribbeans soon lost their edge. The U.S. slowed things down, retained the bulk of possession, and seemed content to play keepaway until the final whistle.

Sure enough, the pair quickly combined on a beautiful goal to give the Yanks a 4-0 lead. Kljestan did well to spot Pulisic's run and cross the ball into his path, but the Borussia Dortmund attacker did the heavy lifting, trapping the ball in stride and slotting it into goal with a confident left-footed strike.

Five minutes later Pulisic returned the favor, setting up Kljestan for the fifth goal of the contest. It seemed shockingly easy, even against an overmatched SV&G side. Pulisic pushed down the left channel, looked up, spotted Klejstan's run, slid a perfect cross to his teammate, and the mustachioed midfielder passed the ball into the back of the net.

That exchange seemed like it would put an end the scoring but Pulisic decided to put an exclamation point on his performance. The Pennsylvania native found himself alone deep into stoppage time and scored a goal from 18 yards out, sending a signal to Klinsmann and others that he is a major, major talent.

What did you think of the match? Share your thoughts in the Comments section below, and tell us your Player Ratings right here.