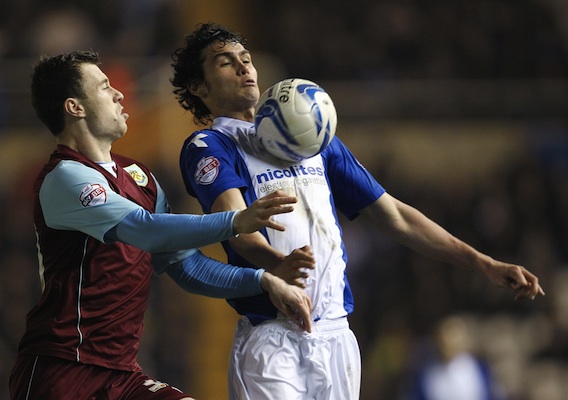 Josh Deaver’s weekly ASN 100 Update is back and better than ever, with newsy tidbits, snarky commentary and so many videos to watch your productivity is bound to suffer.
BY Josh Deaver Posted
March 27, 2014
10:58 AM
Michael Bradley—ASN rank #1
The new-look Toronto FC franchise kept rolling in Week 3 of the new MLS season, downing DC United 1-0 in the club’s home debut at BMO Field. Only two weeks in and the DP trio of Michael Bradley, Jemaine Defoe, and Gilberto appears to be clicking on all cylinders. They sliced the D.C. United backline so frequently that the score line could’ve easily been 3-0 at the break. It wasn’t until the 60th minute, however, that the Reds got on the board after Bradley played a beautiful ball to Gilberto, whose deflected shot fell into the path of Defoe, who slotted it home for the game’s only goal. In addition to the three points, Bradley also came away from the match with 12 staples in his head after cracking skulls with Davy Arnaud during a second-half challenge.

Someone asked Bradley, 'How many staples?' 'Dunno,' he shrugged. pic.twitter.com/RHzpOwC29R


Wanted 3 points, but the overall performance was much improved. 2 gingers scoring in the same game has to be a sign of the apocalypse. #RBNY

It’s happening. [Begins building fortified underground shelter] Brek Shea—ASN rank #40
Geez, Brek. Polarizing much? Give a read to Laura Greene’s latest edition of “On the Record,” which tracks what people are saying about the lanky Texan. Regardless of your opinion, Shea has proven himself to be a game-changer during his tenure with the national team. Julian Green—ASN rank #56


FIFA has approved change of nationality for Julian Green--he's eligible to play for USMNT immediately.

Oh, you didn’t know? You better call somebody. It appears Green is all set to make his national team debut next week against Mexico. In related news, Arsenal phenom Gedion Zelalem is no longer listed on the German Under-17 roster. Live in hope, America. Oguchi Onyewu—ASN rank #61
So, when did Oguchi Onyewu turn into an attacking midfielder? Facing off against former club QPR, which unceremoniously waived him earlier this year, Onyewu went on a powerful run past two defenders before slotting a pass to Leon Best who found the net for the Owls in a 3-0 win. You would be right to think his shocker against Ukraine would eliminate him from World Cup contention. However, I wouldn’t be so sure. Will Packwood—ASN rank #95
On Friday, the young Birmingham City defender, who recently received his first senior national team call up, was named Football League Player of the Month for February. In weekend action, Packwood played 90 minutes for the Blues in a 2-1 loss to Reading. Hovering precariously close to the drop zone, Birmingham City has now lost six of its last eight in league play. Josh Deaver is a former academic turned soccer obsessive. Follow him on Twitter.