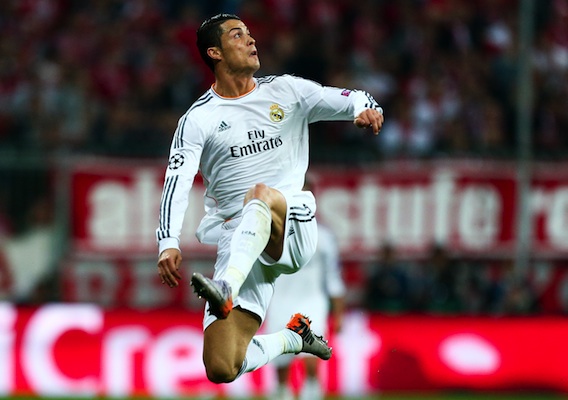 Each of the U.S.’s Group G opponents had multiple players active over the weekend. Here, we bring you all of the highlights as well as some news about a crucial German returning after a lengthy injury layover.
BY Blake Thomsen Posted
May 05, 2014
1:58 PM

Cristiano, you have outdone yourself. The world’s best player delivered yet another reminder of his quality, this time scoring an outrageous stoppage-time volley to bring Real Madrid level with Valencia. With Angel di Maria’s cross a bit behind him and his back to the goal, Ronaldo aggressively backheeled the ball with the bottom of his cleat, getting an astonishing amount of power on the shot and comfortably beating Valencia keeper Diego Alves. Including his brace at Bayern Munich in the Champions League on Tuesday, Ronaldo has now scored five goals in his last three games. His brief injury delay in early April seems to have reenergized him, just in time for the World Cup. Along with Ronaldo’s ridiculous goal, there was an even bigger piece of Group G news from Sunday’s Madrid game. For the first time since tearing his ACL in November, German central midfielder Sami Khedira was in the squad for Real. His return could not have come at a better time for Germany. Provided he is back to full fitness, Khedira will likely slot right back into Joachim Low’s starting XI. However, with Real desperately needing to win each of its three remaining La Liga fixtures and with the Champions League final looming, Khedira is not in a good spot to be eased back into first-team action. He could very well get to Brazil having only played a few hundred competitive minutes in 2014, with the majority coming in Germany’s pre-World Cup friendlies.

Bayern recovered from Champions League embarrassment with a convincing 4-1 win at Hamburg, and it was the club’s two young German maestros who stole the show. Mario Gotze scored twice and assisted Thomas Muller, and Muller assisted one of Gotze’s goals as well.
Hamburg 1-4 Bayern Munich by omnisport-gr The duo now have 16 and 27 goals this season, respectively, and are locks to start for Germany in the World Cup. Given his excellent goal scoring this year—as well as lack of form and injuries for Germany’s main strikers—it seems quite possible that Gotze will see time as a false nine in a 4-6-0 in Brazil. Gotze’s ability to link up with his fellow attackers as well as score goals of his own will make him a nightmare to defend against in such an advanced role. In contrast to the bright performances of Muller and Gotze, German center back Jerome Boateng picked up a red card for a silly headbutt. Boateng has struggled mightily for Bayern over the past few months and looks like one of the weakest links in Germany’s world-class starting XI at the moment.

Ghana center mid Emmanuel Agyemang-Badu continued his excellent play in 2014 with a goal in Udinese’s 5-3 win over Livorno.
Badu Goal ~ Udinese VS Livorno 2-1 ~ 04/05/14 by All_Goals His fine form over the past several months will give Ghana manager James Appiah a big decision to make regarding whether to play Agyemang-Badu or the legendary Michael Essien in Brazil. Due to injuries and poor form, Essien has played fewer than 500 minutes of league football this season, split between Chelsea and AC Milan. He’s probably clinging onto his starter’s spot for now, but Agyemang-Badu is gaining ground quickly.

Jordan Ayew scored the second goal in Sochaux’s 2-0 triumph over Nice. The near-post header was his sixth of the season in all competitions, a modest return for a player who may or may not see time off the bench in Brazil. Ayew’s older brother Andre is a probable starter, but the 22-year-old Jordan will likely have to wait until the 2018 World Cup to see meaningful playing time for Ghana, with Christian Atsu likely ahead of him on the attacking substitute depth chart.

Portugal striker Eder scored the opener in Braga’s 1-1 draw with Maritimo over the weekend. We couldn’t find video of the goal, but we’re guessing it probably wasn’t as good as Ronaldo’s. Eder will likely be on the plane, but he’s a very long shot to start in Brazil. He’ll most likely compete with the likes of Nelson Oliveira and Vierinha for minutes off the bench.

Is Ronaldo in the best goal scoring form of any of the U.S.’s Group G opponent? The answer to that question depends heavily on whether you’re interested in the level of competition, because Asamoah Gyan has nine goals in his last five games, and 15 in his last 10. He scored the first two in a 2-2 draw with Al Jazira. Gyan probably would have faced more resistance from a couple of practice cones than he got from Al Jazira’s backline, but the fact that he’s scoring so many goals means he’s certainly doing something right. How do the U.S.’s players stack up with its Group G opponents? Who strikes the most fear in your heart out of all of the Group G players? How many goals would you have in your last 10 Arabian Gulf League games? Let us know in the comments section below. Blake Thomsen is a frequent ASN contributor. Follow him on Twitter.