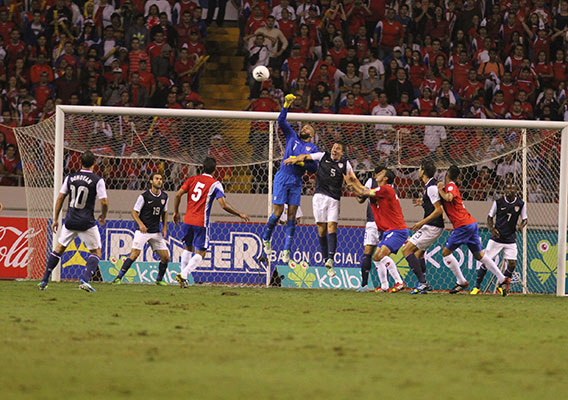 U.S. Down a Goal After Ugly Start in Costa Rica

The United States fell behind early on the road in Costa Rica, giving up two bad goals in the first 10 minutes. Forced to play without, Michael Bradley, the team did rally to get within one at the half.
ASN Slideshow

BY Noah Davis Posted
September 06, 2013
10:57 PM
SAN JOSE, COSTA RICA—Moments before the start of the United States match, Kyle Beckerman and Geoff Cameron frantically warmed up while their teammates made their final preparations in the locker room. Moments earlier, Michael Bradley had walked off the field, limping. "Ole, Ole Ole Ole. Ticos. Ticos," sang the crowd. Two rolls of toilet paper flew from the upper deck. They landed, rather limply, about 75 feet from the field. It was loud and boisterous and a bit angry in Estadio Nacional, but it was no Saprissa where the United States had never won. Word of Bradley's left ankle sprain came followed by new that Cameron would now start. The Ticos players applauded the crowd of 35,000 right before kickoff. It was game on, the U.S. without its best player. The Americans certainly looked lost, conceding two in the first nine minutes and barely competing as the crowd exploded into rapture on both goals. The game moved into a back and forth slog as the water-logged field came up in chunks. In the 28th minute, the crowd did the wave. Jurgen Klinsmann alternated between pacing the sidelines and standing near the edge of his technical area with his hands on his hips. It was not supposed to go this way. But then, silence. Clint Dempsey converted a penalty drawn by Fabian Johnson off a Graham Zusi free kick. The Americans, who played about as poorly as they could have, went into the half down a single goal. The fans knew the Stars and Stripes had broken their hearts before. The second half could be special.