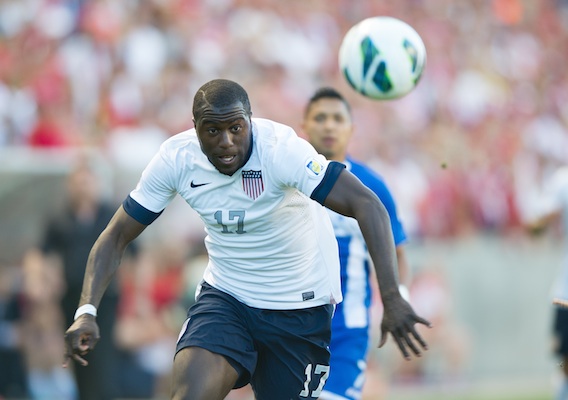 The U.S. men's soccer team struggled to hold off a battered-yet-determined Honduras team, but it did just that. Altidore's late goal put the Americans in great shape to qualify for the 2014 World Cup.
ASN Slideshow

BY Staff Posted
June 18, 2013
11:10 PM
IT WAS HARDLY PRETTY, but that's the way it usually goes in the Hex. A gritty Honduras team played the United States to a standstill for 73 minutes on Tuesday night, but the Americans eventually broke through on a Jozy Altidore goal, earning an important 1-0 victory as a result. With the strike, which was created by some lovely interplay between Graham Zusi and Fabian Johnson, Altidore has now scored in four consecutive U.S. contests—matching a record previously set by Landon Donovan. The Yanks now take a commanding lead in the final round of World Cup qualifying. "I just think it's just a matter of us clicking as a whole," Altidore said after the match. "These past four or five games have been our best in the past year. It's no surprise that we're being successful." Altidore was also quick to share the glory with the two men who set him up for the crucial strike. "Graham is so good at being aware of his surroundings," Altidore said. "He laid it off to Fabian and Fabian...laid a great ball off." American Soccer Now has two writers in Sandy, Utah, right now, and they will both be filing stories deep into the night and well into tomorrow. Please check back to read their work, absorb quotes from the coach and team, see some great photos, and watch the game videos. Check back later. There's a lot more where this came from.