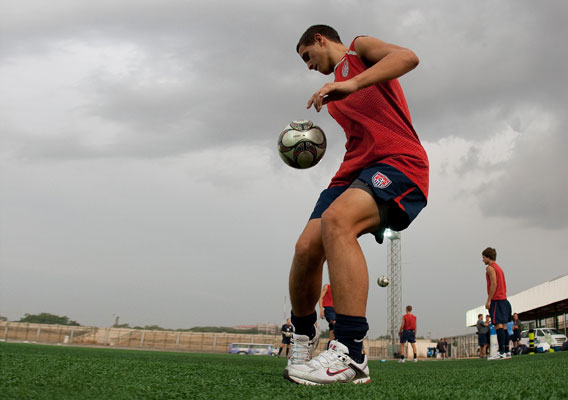 Though through to the next round, the United States U-20 squad has plenty to work on in Friday's group stage match against Costa Rica. Josh Deaver previews the contest here.
BY Josh Deaver Posted
February 22, 2013
1:12 PM
Following an unconvincing 2-1 victory against Haiti on Monday night, U-20 coach Tab Ramos knows adjustments must be made ahead of tonight’s clash with Costa Rica. "We are disappointed with our performance, but as everyone knows nowadays, it’s not easy to get a win against anyone,” Ramos said. "There is a very good chance there will be some changes going into Friday.” Because Costa Rica defeated Haiti 1-0 on Wednesday, the U.S. has already secured a spot in the next round of the CONCACAF Championship. So Friday's match becomes an opportunity to fine-tune the U.S. game plan prior to the must-win quarterfinal match next Tuesday that will determine World Cup qualification. If the Yanks are able to earn at least a draw against the Ticos, they will win Group A and avoid Group B winner Cuba, which has surprised many with its quality in victories over Canada and Nicaragua. In order to get a result, however, Ramos will need to adjust his strategy as Haiti was able to exploit several weaknesses in the U.S. lineup. On Monday night, Haiti’s swarming midfield dominated possession for long stretches. The U.S backline was ineffective at both ends of the field, failing to provide width for the attack and struggling mightily against the speedy, athletic forwards for Les Grenadiers. Despite the uneven performance, Ramos was “very happy” with the center of defense and will likely deploy Caleb Stanko and Shane O’Neill once again. The pair was competent on Monday, but lapsed at times and will need to tighten up in preparation for the talented Costa Rican attack. The outside of defense, however, will require some significant adjustments to ensure that Monday’s misfire is not repeated. Creighton defender Eric Miller could see time after Boyd Okwuonu turned in an ineffective shift at right back on Monday. Okwuonu was tentative and appeared out of his depth. Haiti frequently targeted the left flank, where the University of North Carolina product was torched for the opposition’s only goal. On the left side, Jevan Torre did not fare much better. The Los Angeles Galaxy prospect got the surprise nod on Monday, but did not offer enough going forward, leaving the outnumbered U.S. midfield on an island with some sloppy possession. Juan Pablo Ocegueda should make the Starting XI in upcoming matches. In the midfield, it wasn’t until Ramos switched to a 4-4-2 formation that the U.S. was able to slow down the feisty Haitian attack. If Ramos modifies his lineup, Wil Trapp, who put in Monday’s most anonymous performance, could be paired with Mikey Lopez in front of the back four or even dropped altogether. In attack, the U.S. showed much more promise. Man of the Match Daniel Cuevas proved to be a menace on the wing, drawing a penalty to set up the opening goal and scoring the game winner midway through the first half. Benji Joya and Jose Villarreal put in competent shifts but were never able to truly take control the game. They will remain focal points going forward, but Dillon Serna and Daniel Garcia could see the field for some seasoning and to give the pair a rest. Expect changes up top as well. Aside from his assist on Cuevas’ goal, Kaiserslautern prospect Mario Rodriguez was uneven at center forward. Jerome Kiesewetter was subbed in late against Haiti, and could get the start against the Ticos. Ramos is also high on Georgetown freshman Brandon Allen, who is viewed as a late- game option. As profiled on American Soccer Now, the Costa Rican squad features some dangerous players that the U.S. will have to contain if it hopes to come away with a positive result. River Plate prospect Gabriel Leiva, and John Jairo Ruiz, who has excelled in the Belgian second division, performed well on Wednesday against Haiti and combined for the game’s winning goal. Monday’s performance demonstrated that this tournament will not be easy for the Yanks. With a must-win contest looming early next week, the team must get on the same page to ensure that the failure of the 2011 qualification campaign is not repeated. PROJECTED LINEUP
Cropper; Ocegueda, Stanko, O’Neill, Miller; Trapp, Lopez; Cuevas, Gil, Villarreal; Kiesewetter