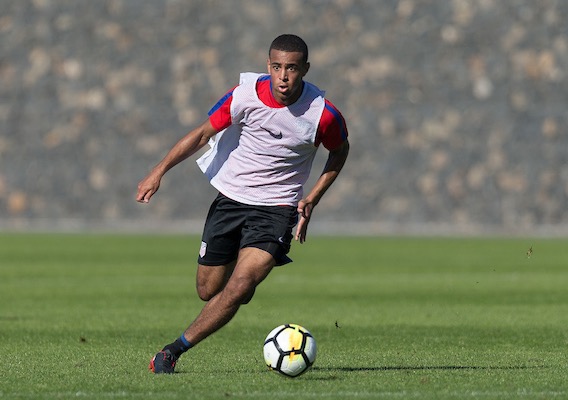 Tyler Adams Is the Present, and the Future

American Soccer Now chats with the teenage New York Red Bulls star as he prepares for his first senior national team game while looking ahead to his bright future.

These are not the best of times for the United States national team. The team will watch the 2018 World Cup on television and will not play a meaningful game until the summer of 2019. But the current roster features many top young players who took impressive steps in their professional careers in 2017.

New York Red Bulls midfielder Tyler Adams, 18, is one such player who had a meteoric rise.

At the start of 2017, Adams was not heavily involved for any youth national team and was caught in a log jam of talented players in Jesse Marsch's midfield. Despite winning the 2016 USL championship with Red Bulls II he appeared to be another in a list of young Americans who would struggle for minutes in the domestic league.

Marsch had other ideas.

“The biggest challenge with Tyler has been trying to figure out are we too cautious with his development?” Marsch said. “You could go back to the Chelsea game, he was one of the best players on the field and so after that I’m sitting there thinking to myself, ‘well I know he’s only 16, but he basically beat Chelsea. Do we want give him more?”

Things quickly began to fall in place for Adams at the start of 2017. The Red Bulls traded away captain Dax McCarty, and Marsch told Adams to expect to play a big role for the team. Then U-20 coach Tab Ramos brought Adams onto team despite him also being age-eligible for the 2019 cycle.

Adams seized the day. He played a huge part in the U-20 team’s run to the World Cup quarterfinals and became one of the Red Bull’s most important players as it advanced to the Eastern Conference semifinal before narrowly falling to a powerful Toronto FC team.

The end result was a call-up to the full national team.

“The energy in camp so far has been great,” Adams told ASN from Portugal. “A lot of the talk has been so far about how the team didn't qualify for the World Cup and how many things can be changed, but everyone has come in with a great attitude. I think first and foremost when getting the call, I was just excited—excited for the opportunity and excited for all the hard work that I've been putting in this year has been paying off. More than anything, I'm excited to represent my country at the highest level possible.”

“I was watching the Trinidad game live, and it's a gut wrenching feeling when your country doesn't qualify for the World Cup,” he added. “For me, looking back and trying to figure out what happened. My goal was to try to get into the camp after they qualified for the World Cup and ultimately maybe be a darkhorse to make that roster. Now that circumstances have changed, I use that in terms of motivation. Now I have a big opportunity in front of me and I just have to keep working ahead of the next major tournament and be ready to get this thing back on track.”

In recent years young players have struggled to really be part of the national team. Bruce Arena was adamant in the final rounds of the Hexagonal that it was not the time to bring in new players. After the team was eliminated, he said that if the team qualified, younger players would have been soon been introduced. Jurgen Klinsmann tried to integrate some young players in 2016 but none really stuck with the team. The only young player who broke through was Christian Pulisic.

But in 2017, other young players have begun to breakthrough en masse with their clubs. Along with Adams, Cameron Carter-Vickers is staring for Sheffield United, Weston McKennie is a starter at Schalke, and while not on the current roster Jonathan Gonzalez is starting for Liga Mx leaders Monterrey.

Adams has developed a strong bond with each of those players from the youth national teams and is excited to continue to progress with them.

“The relationship that I've built with Cameron Carter-Vickers, Weston McKennie, Christian Pulisic, all of them is strong,' he said. "Christian and I go further back with the U-17s and he moved onto bigger and better things quickly with Dortmund and the national team. We have a good connection and stay in touch. Weston is a regular starter now with Schalke. We're building up chemistry here and spending time off the field has been fun. Cameron and I were together for a month at the U-20 World Cup and we have good chemistry on the field. Jonathan, he is someone that I go further back than anyone. We played together in my first national team call-up when I was 14 years old.”

McKennie has known Adams since before going into U.S. Soccer’s residency and has been very impressed with what he’s seen from Adams in Portugal in what has been the first call-up for either player.

“Sometimes it's hard to believe that he's one year younger than me,” McKennie said from Portugal. “He's such a mature player. He was starting for New York in the semifinals against Toronto. He's one of those players that is so energetic and he works so hard. I remember I was watching that game and thinking: 'gosh, what position is this guy playing?' He was all over the field. He's a player that is going to be a big piece of the future. You can see it now and you could see it before.”

Thus far in camp in Portugal, Adams has been playing in central midfield he believes is his best position. That question was frequently debated as he played all over the field for the Red Bulls in 2017, fluctuating between the No. 6, the No. 8, and even the No. 10 in central midfield along with right wingback.

But with his rise, there are questions about the next steps of his career. He has flourished with the Red Bulls but looks likely to soon be joining the ranks of Americans playing abroad. Going abroad is always risky and some American players have failed not because of a lack of talent, but because of a lack of maturity.

Marsch believes that Adams has the talent, drive, and maturity to succeed anywhere. He is quick to point out that Adams is taking college classes online at Southern New Hampshire University to work towards a degree and has strong values instilled from his family.

And the bond between the Adams family and the Red Bulls organization is strong. Together with his younger brother who is also in the Red Bulls academy, his family in earlier years drove both kids 90 minutes each way to practice every day. Adams has steadily progressed from the academy to Red Bulls II and now the first team.

But even Marsch knows the days Adams will wear a Red Bulls jersey are now limited.

“I think we can all agree that he’s not going to be here for his whole career,” Marsch said. “Then it’ll just be a matter of trying to [get] together with Tyler and his family... to figure out what are the next steps and what’s best with Tyler’s overall development. If you talk to Tyler I think he’d say all the right things, but he’s an ambitious kid and he should be. It won’t be an easy offseason to figure out what the next steps are, but we’ll do it in a way that we think honors Tyler, his family and our club.”

“I think all of us in this club will be looking towards this Portugal game,” Marsch added. “I’m excited for his next step.”

Now on the national team ahead of a game against the European champions, Adams is eager to express his ambitions while also stressing that the Red Bulls has been a great launching pad for his career.

“Of course one day I want to be able to say I played in the Champions League and so many other major tournaments like you see Christian doing now,” Adams said. “Major League Soccer has been a great pathway for me and I am continuing there. I am under contract next year as well. The New York Red Bulls is where I grew up and I have so much pride playing for them. But playing Champions League soccer and at the highest levels, wherever that might be in the world, is definitely in my ambitions.”