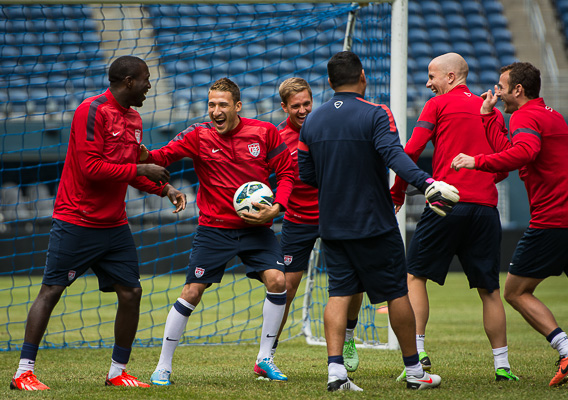 On the brink of its fourth game in three weeks, U.S. players have spent a lot of time together. Not surprisingly, the players are starting to get a real feel for one another, which could pay off in a big way next summer.
BY Liviu Bird Posted
June 11, 2013
1:15 PM
SEATTLE—During the last two days of training, most U.S. national team players could be found hooting with glee in a big juggling circle. The smiles and jokes are coming easily, and the team seems relaxed as it prepares to face Panama in a World Cup qualifier at Seattle's Century Link Field (9:30 p.m. Eastern; ESPN, UniMas). “With every day and every week, we’re getting closer,” Terrence Boyd said on Monday. “Everybody gets to know the other men even better. It’s good for the team chemistry, if we stick together for a long time.” The current national team camp convened on May 26 in Cleveland, before a tough 4-2 loss to Belgium three days later. Since then, the team has traveled over 5,000 miles, crossing North America from Cleveland to Washington to Kingston, Jamaica, and finally, to Seattle on Saturday. The U.S. travels to Salt Lake City for one final match in the current month-long stint after Tuesday’s match against Panama. Players who like each other tend to play better together, Boyd said. That could be reflected in the finished product at World Cup 2014 in Brazil. “Next year, we’ll be even a better team, and everybody will understand the other player next to him even better,” Boyd said. Both the U.S.’s togetherness and team chemistry have been tested multiple times during the current qualification cycle. Now, the Sporting News story in March that quoted anonymous player sources and brought head coach Jurgen Klinsmann’s leadership into question is all but forgotten. The end goal is qualifying for the World Cup, and that was just another bump in the road. “Nothing changed [since then],” Klinsmann said in a press conference on Monday. “It is normal that not everyone shares the same opinion. There will always be moments where you discuss it differently than maybe I see it, or the coaching staff or maybe the players, and we just need to go through that.” Since that story, Michael Bradley has insisted that no factions exist in the team. Bradley obstinately defends that assertion at every given opportunity. “The team is together. The team has been together,” he said. “The mentality, the team spirit, that’s something that gets worked on every time you’re together but, as I said, the strength of this team has always been the mentality, the spirit, how much it means for guys to come into this group and play for the national team.” If anything, that adversity and outside questioning could serve to bring the team even closer together, Clint Dempsey said. “The more situations you’re able to overcome and deal with, it makes you stronger as a team,” he said. “I would say the turning point for us was the game in Denver, and then just moving forward and building and getting stronger.” The U.S. team clearly enjoys being together. Klinsmann said: “At the end of the day, it’s the entire group, it’s the chemistry of that group, it’s the chemistry of the organization that will be strong enough to qualify and then, hopefully, show a great showing then in Brazil next summer.” NOTES:
• Herculez Gomez has been released from the U.S. roster to continue individual training and rehabilitation of a knee injury in Los Angeles. No replacement will be named.
• Klinsmann confirmed that Jermaine Jones would miss Tuesday’s match against Panama due to a concussion. However, he said Jones would likely play on June 18 against Honduras in Salt Lake City. At training on Monday, Jones jogged off to the side before the team warm-up, then sat out the rest of the session. Liviu Bird is the Cascadia regional editor for SoccerWire.com, as well as an ASN contributor. Follow him on Twitter.