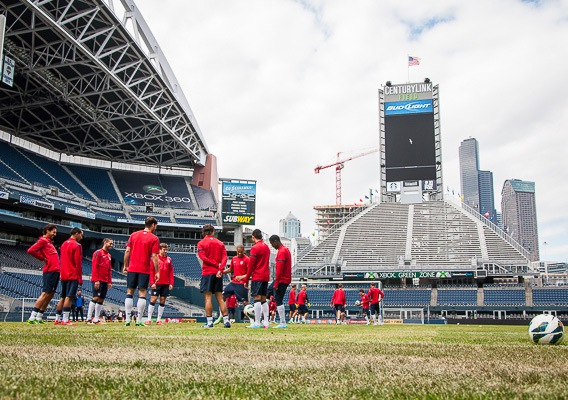 Training Report: Getting the Legs Back in Seattle

The United States had a long travel day yesterday, flying from Jamaica to Seattle. The team was back on the field today, and ASN's Liviu Bird spoke with veterans Tim Howard and DaMarcus Beasley
ASN Slideshow

BY Liviu Bird Posted
June 09, 2013
9:18 PM
SEATTLE—Despite the grueling 3,000-mile journey from Kingston, Jamaica, the United States men's soccer team was in good spirits before Sunday afternoon’s training session in Seattle. “We got to sleep in this morning, had a good workout in the gym, so I think everyone’s feeling refreshed,” goalkeeper Tim Howard said. “Being in Kingston, it’s hard to get out. It’s really stuffy. So to be able to be in the fresh air, in a great city, which we feel like is home to us, it’s been good.” It took nine-plus hours to get to the Emerald City. After an early wake-up, the team charter made a five-hour flight to Monterrey, Mexico, continuing to Seattle after refueling. Players started Sunday’s training session in two juggling circles, punctuated by noisy outbursts as teammates failed to keep the ball in the air. If fatigue was a factor, nobody showed it in the short period in which the media watched the team train. Jermaine Jones, who sustained a concussion in the 2-1 win over Jamaica, was the only player missing from U.S. training. He will work with a specialist to ensure his medical tests match his measured baseline before he rejoins the team. As his teammates trained, Jones tweeted that he would be out for the match against Panama. Aside from Jones’ injury, the buzz around training mostly centered on the temporary grass surface laid on top of CenturyLink Field’s artificial turf. None of the players set foot on it before Sunday’s session, and they will have just two days to adjust to it before playing on Tuesday. “I saw it on TV last night, so it’s obviously much different in person. We’ll see how it goes. We’ll see how it plays," Howard said. "You look for spots on the field that may tear up easily and try to avoid them, if that’s even possible.” DaMarcus Beasley had the most positive comment about the surface of any player interviewed thus far, saying he “would rather play on this than on turf, for sure.” The surface received mixed reviews on Saturday night after Seattle Sounders FC’s 3-2 win over the Vancouver Whitecaps, in which Vancouver defender Andy O’Brien pulled a hamstring, he said, as a direct result of the slick pitch. Looking ahead to Tuesday’s match, both Beasley and Howard compared Panama to the Jamaican team they just defeated. “They’re a good team that’s kind of a little bit like Jamaica: they’re unpredictable,” Beasley said. “We’re definitely going to have our hands full with them.” In the 2011 CONCACAF Gold Cup, Panama shocked the U.S. by winning 2-1 in the final group game. Just 11 days later, the U.S. reversed that by winning 1-0 in the semifinals at Reliant Stadium in Houston. But that was a long time ago, Howard said. “Different team, different coaching staff,” he said. “A couple days after that, we turned around and put that [bad] result right in Houston. So there’s nothing residual from last time.” On Tuesday, Panama will be without forward Blas Perez, who remained in Panama because of a gastrointestinal problem. The American goalkeeper said he would still be wary, even though Perez is a key player for the Panamanians. “I think more than anything, we’ve learned that if we focus on ourselves and get our performances right, that usually goes a long way,” Howard said. “We looked at this trip as a nine-point trip. We got to three in Jamaica. It will be important for us to get these three.” Liviu Bird is the Cascadia regional editor for SoccerWire.com, as well as an ASN contributor. Follow him on Twitter.