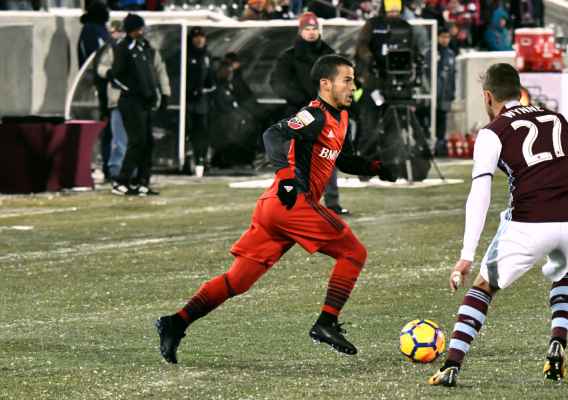 The CONCACAF Champions League is underway and Toronto is likely heading into the quarterfinals. The rest of the MLS teams open up tonight and tomorrow. Brian Sciaretta takes a look at the opening game and a loot ahead to tonight.
BY Brian Sciaretta Posted
February 21, 2018
6:50 AM
The 2018 CONCACAF Champions League got underway on Tuesday night and the later game featured two MLS teams playing a game in brutal conditions.

As expected, Toronto FC defeated the Colorado Rapids 2-0 in Commerce City. Taking two away goals back to Canada will likely be an insurmountable lead for Toronto and Colorado simply lacks the firepower to overcome such a deficit on the road.

The game itself was better than expected given that the game was played in fridge temperatures around 3° F and felt like -16° F. Combined with the fact both teams are still in preseason, it was unfair to expect a quality game.

Colorado should have taken the lead in the first half when Senegalese forward Dominique Badji had a 1v1 with Toronto keeper Alex Bono. Badji did poorly and Bono came up with the big save to keep the game scoreless.

In the second half, Toronto simply took over through Sebastian Giovinco. The Italian showed why he was one of the best players in the league when he set up Jonathan Osorio’s goal in the 55th minute and scored his own goal in the 75th minute. In both goals, Toronto exploited Colorado’s left flank.

Of particular note, Tim Howard was particularly poor on Osorio’s opening goal. It’s tough to watch with someone who was once so great and will nevertheless go down as one of the most important players in the history of American soccer.


After a poor season in 2017, FC Dallas will take on Tauro in Panama City tonight. Tauro has opened its season in Panama with two wins, four draws, and two losses in its first seven games.

FC Dallas might have to play without U.S. international Kellyn Acosta who pulled his groin in the preseason. Despite his absence, there are plenty of reasons to be hopeful Dallas will be better in 2018. Mauro Diaz is finally 100% back and the club acquired defenders Reto Ziegler, Anton Nedyalkov and Colombian midfielder Santiago Mosquera to boost its chances.

Can an MLS Team win?


It is possible for an MLS team to win this tournament, but still unlikely. The edge typically belongs to Mexican teams due to their higher budget, depth, and the fact that the teams are in midseason. The fact MLS teams are in preseason is a huge detriment.

Club America is the clear favorite as none of the other three Liga MX teams have impressed early in the season. For MLS, it has a better representation in this year’s tournament. The key, will be to hope one or two teams can advance to the semifinals which will be played a month into the regular season. Of course, it is anticipated that MLS teams will all run into Liga MX teams in the quarter finals.

It will be tough.