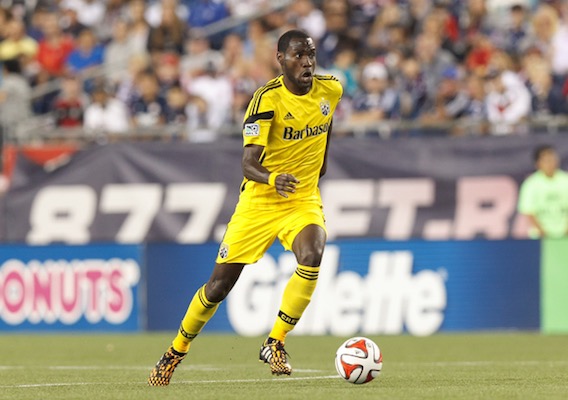 After a breakout campaign in Major League Soccer, the Columbus Crew midfielder is now participating in his first United States national team camp. Brian Sciaretta catches up with the man on the move.
BY Brian Sciaretta Posted
January 13, 2016
10:50 AM

IT WASN'T UNTIL 2014 that Tony Tchani became a regular starter at club level for Columbus Crew SC. It wasn’t until 2015 that he began to establish himself as a top player at central midfield.

In 2016, Tchani finds himself in an unlikely spot: two different national teams are vying for his services.

“Everything started this past season,” Tchani told ASN. “The year before, I had a pretty good season, but I wasn't really too sure about that. This was the year I heard people talking and I felt like I had a shot.”

Born in Bafang, Cameroon, Tchani immigrated to the United States in 2004, settling in Norfolk, Va. Four years later, he was a Virginia Cavalier and the ACC’s freshman of the year. A year after that, he was one of the best players in the country and led UVA to the national championship.

Tchani’s first few MLS seasons slowed the hype, hinting he would have the career of an unassuming journeyman rather than a star. He’d been drafted second overall by the New York Red Bulls in 2010 but was traded to Toronto at the start of his second season; just three months later, he was dealt once again, this time to Columbus.

But at the end of 2015, the outlook for Tchani somehow changed even more quickly—in the opposite direction.

In a whirlwind span of about 60 days, the 26-year-old received his first call-up from his native Cameroon for a pair of World Cup qualifiers, was forced to withdraw from the games because of injury, played in his first career MLS Cup, and accepted a call-up from the United States. He will spend January with Jurgen Klinsmann and co. in Carson, Calif., a reality that quite nearly wasn’t.

“When I got that call-up [from Cameroon], I was very happy and I was looking forward to it,” Tchani said. “But injuries happen. Those are the things you can't really control.

“I felt that I had this opportunity [with the U.S.] right in front of me, and it is hard to turn down because you never know when you'll get another chance. There are so many other guys that would die for those opportunities. For me being healthy and saying no, I don't think that is the right decision.”

While his international debut was temporarily put on hold with Cameroon, Tchani remained with Crew SC, which went on to advance out of the Eastern Conference as the No. 2 seed before losing to Portland, 2-1, in the final.

Disappointment, however, was quickly followed by opportunity. The news first came via his club coach, Gregg Berhalter, himself a former longtime American international: Tchani, who acquired his citizenship in 2013, had been called up by the United States. “I was then not trying to get too excited until it became official,” he said.

It was a stunning turnaround from the events of little over a month prior, when playing for Cameroon had seemed all but assured. Before making a decision, Tchani discussed the matter with his mother.

She told him he had the family’s support. Tchani went for it.

“I just appreciated everything here,” he said. “I went to high school here. I went to college here. I got drafted. … Here in the United States, I always felt like I was part of it, even before I got my citizenship. I've had many people supporting me, and I was like, ‘I have to follow the team.’ I was watching the team.”

There’s more good news for Tchani, too: With a clear opening for him in central midfield, this first call-up could end up being far from his last. Kyle Beckerman and Jermaine Jones, two mainstays at the position, are approaching their mid-30s, their international careers likely in their final phase. Geoff Cameron, meanwhile, has yet to establish himself in that role for the U.S. team, and other options such as Perry Kitchen and Danny Williams remain unproven.

After a disappointing year for the national team in 2015, Klinsmann said he was looking for new players to emerge and break into his side. There’s at least one player who does just that, it seems, at every January camp.

This time, for a camp that will conclude with friendlies against Iceland and Canada, Klinsmann singled Tchani out as a possible player to watch.

“The January camp has always been the camp of opportunities for players that badly, badly want to knock at the door of the senior national team and want to become a player of international status,” Klinsmann said in a U.S. Soccer press release. “Here we are giving that opportunity now to kind of already mature players like a Tony Tchani, like Ethan Finlay or Luis Robles. You want these players really to come in and make a point and take that opportunity to try to come back into that group by the end of March and maybe play World Cup qualifying.”

Still, Tchani did not completely rule out representing Cameroon in the future before the start of camp, citing the fact that he had yet to play for either team and therefore could not evaluate either setup. But the thought of representing the United States is one that he said he looks forward to immensely.

Above all, he’s eager to prove what he can do.

“I believe this year will be better and it will change a lot of things,” Tchani said of the U.S. team. “I am just looking forward to going in there and fitting in because I've never had any experience with any national team before. That's going to be something new.

“Hopefully I can adapt and show the coaching staff what I am capable of.”