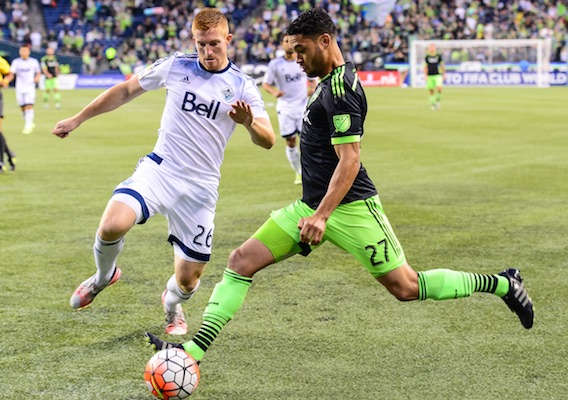 Tim Parker Plans to Make the Most of U.S. Opportunity

The Vancouver Whitecaps defender has waited for years to get another chance to represent the United States, and he fully intends to make the most of his call-up to January training camp.
BY Brian Sciaretta Posted
January 18, 2016
9:00 AM

IT'S BEEN A WHILE FOR TIM PARKER.

Prior to his inclusion on Jurgen Klinsmann’s 2016 January camp roster, the central defender's last national-team call-up had come at just the U-18 level; in the years since, he found himself overlooked by both the U-20 and U-23 teams. Parker’s spot in Carson, Calif., this month, therefore, was both a long-awaited return to the U.S. fold as well as a chance to make up for lost time with Andi Herzog’s Olympic-qualifying group.

To those who follow MLS closely, especially those north of the border, Parker's call-up was long overdue.

“It means a lot to be called back in and to be recognized,” Parker, 22, told American Soccer Now. “It means a lot to me to wear that badge, the jersey, and those colors. For me, I’ve kind of been sitting on it for a while, waiting for the phone to ring, and I’ve finally got the opportunity. Now I want to make the most of it.”

Selected 13th overall by the Vancouver Whitecaps in the 2015 MLS SuperDraft, Parker made 25 appearances across all competitions in his rookie campaign, being named Man of the Match on three separate occasions.

It was in the second half of the season that he truly picked it up, emerging as one of the better young central defenders in the league and helping Vancouver to a second-place finish in the Western Conference. And the Whitecaps believe Parker is only going to get better—much better—from here.

"When he gets recognized by Jurgen, that’s got to give him further motivation," team president Bob Lenarduzzi said via the club’s website. "If you look at his body of play over the whole of last season, he never let us down.

“One of the things that came through loud and clear at the draft—he’s a very, very mature player and mature individual. Whenever it looked like he had hit the ceiling last year, he just continued to improve. And that’s exciting. If he can continue to do that, we’ve obviously got a very good centerback for the future.”

Just a few months ago, however, Parker’s prospects didn’t seem as clear. He’d been a starter for Vancouver for a few months by the time the CONCACAF Olympic-qualifying tournament came around in October, but he was nonetheless left off Herzog’s list. (Parker, for his part, said he was not frustrated by the decision.)

Having slotted in often at left center back alongside Kendall Waston for Vancouver this past season, Parker would seem to have every opportunity now to prove himself a viable partner to Matt Miazga as the March playoff series against Colombia draws near. John Brooks, a naturally left-footed option, may be unavailable because of club commitments; the 18-year-old Cameron Carter-Vickers, meanwhile, appeared a bit overwhelmed at times in that spot during qualifying.

Solidifying his place with the U-23s, though, will require Parker to avoid a common pitfall for young, highly hyped MLSers: the sophomore-season slump.

“I think personally, my expectations exceed others,” Parker said. “So reaching my own goals and my own expectations—I put those first. I want to be one of the guys with the most minutes in the league. That is actually one of my strengths—staying healthy and being able to play in as many games as I can.

“At the same time, if I can put myself into the same shoes that I'm in this year, getting called into the January camp and hopefully also during some international breaks for matches and hopefully getting into some friendlies in the following year as well… With [Klinsmann] wanting to make changes and me getting a call-up, it adds to my mindset to make a good impression on him and make him think about making me a regular.”

That last piece, perhaps, is especially telling. To be sure, the Olympics are a chief goal for the Long Island native but he has more than just the youth teams in his crosshairs these days.

“I’ve watched almost all of the men’s national team games over the past few years, and I pay attention to all the news and all the outtakes of what goes on with that team,” he said. “A part of me will probably tear up a little bit if I get the opportunity.

“It’s just everything you dream of when you’re a kid. Being able to put on that jersey with your name on it and everything that ties into that kind of hits you all at once. It would be hard to keep myself from not being emotional.”