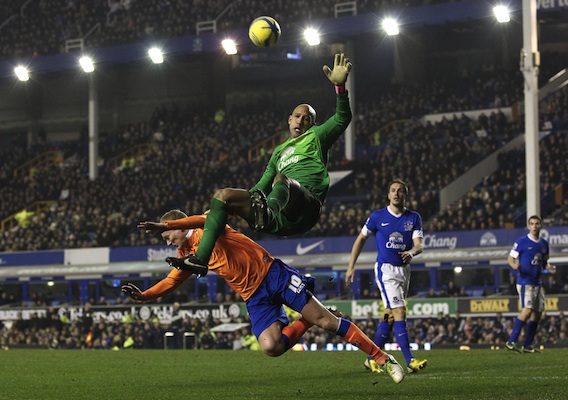 Tim Howard Has Broken Back, May Miss Qualifiers

The United States' No. 1 keeper suffered breaks to two bones in his back and will miss extended time for his club team, Everton, and presumably for the Stars and Stripes as well.
ASN Slideshow

BY John Godfrey Posted
March 08, 2013
6:36 PM
Tim Howard has two broken bones in his back—see slideshow at right—and will miss an undetermined amount of time, according to Everton's official Web site. “Tim is out against Wigan," Toffees coach David Moyes said. "He has broken two bones in his back. We don't think he will be out for the season. I read that (Newcastle's Fabricio) Coloccini could be out for seven weeks (with a similar injury) but we are not sure how long Tim will be out for because, obviously with a goalkeeper, he has to dive around and hit the ground." "I have let him go away for a few days. It might be that, if everything goes well, he misses next week's game as well [against Manchester City] and then because of the international break he might be close after the rest because that would be four weeks." For U.S. national team supporters, the bigger question is this: Will Howard, the U.S. No. 1, recover in time for the crucial World Cup qualifiers against Costa Rica (March 22) and Mexico (March 26)? Aston Villa goalkeeper Brad Guzan could deputize for the U.S. in the two matches. Howard injured his back in an FA Cup match against Oldham Athletic when he collided with Robbie Simpson. See the slideshow above for the details. "He has two fractures, but they are not bones that are supporting anything," Moyes continued. "It is off the spine. They are not weight-bearing. It just needs a bit of healing time. It is not like a pure fracture where you need to wait to look at it. It is a question of whether he can cope with the pain. The bones will heal themselves but it's not good."