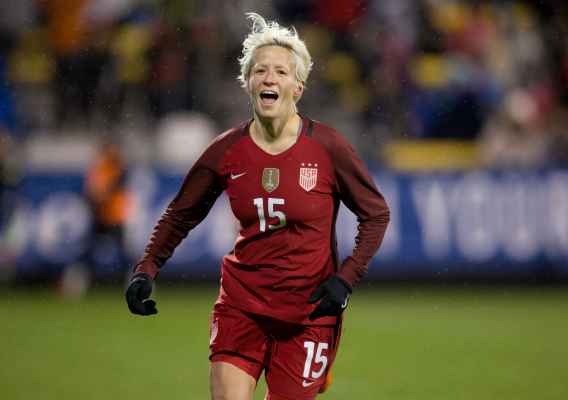 Three thoughts on the USWNT win over Germany

The USWNT opened its SheBelieves Cup with a 1-0 win over Germany thanks to a fine defensive effort and a first half strike from Megan Rapinoe. Here are three thoughts on the match from USWNT expert John Halloran
BY John Halloran Posted
March 01, 2018
8:00 PM
THE UNITED STATES WOMEN'S NATIONAL TEAM opened up the 2018 SheBelieves Cup on Thursday night with a 1-0 win over Germany in Columbus, Ohio.

Megan Rapinoe scored the lone goal in the contest, connecting on a first-half strike to help lead the Americans to the win.


Here are three thoughts on the U.S.’ performance.


Shortly before the game kicked off, ESPN’s Graham Hays put into perspective the relative lack of experience among the defenders who would start Thursday’s game.

With Becky Sauerbrunn out injured, the center back pairing of Abby Dahlkemper and Tierna Davidson headed into the match with a combined 15 caps, and the overwhelming bulk of those belonged to Dahlkemper. For the 19-year-old Davidson, still a sophomore at Stanford, the contest would only be her second game for the U.S. senior team.

And while the team did have the vastly experienced Kelley O’Hara on the left, the relatively untested Taylor Smith—who just broke into the team last summer—slotted in at right back with all eight of her caps.

Their opponent? The second-ranked Germans, who also happen to be the defending Olympic champions.

Thrown into a match against one of the world’s best teams, the young backline shutout the Germans. On the night, Dahlkemper provided repeated clearances in front of goal, Davidson more than held her own, and goalkeeper Alyssa Naeher cleaned up what did manage to get through.

For a defense missing its captain and most experienced player, the Americans put forth an impressive performance.

THE AESTHETICS WERE GOOD ENOUGH


From the get-go, many U.S. fans worried about head coach Jill Ellis’ decision to use Carli Lloyd in the middle for the injured Sam Mewis. To be fair, the decision made sense, with Lloyd clearly being the next best center midfielder available.

Lloyd is from a past era of American soccer, where fitness, effort, and heart trumped some of the more technical aspects of the game. The two-time world player of the year is more sledgehammer than maestro—often effective, but sacrificing elements of possession gained when using a more refined player in the position.

In the end, however, that style of play proved to be worthy of the win as the blustery night began with rain, transitioned to sleet, and finished with snow. The American goal in the match came courtesy of a long punt from Naeher, which Alex Morgan headed down into the path of a surging Rapinoe who expertly tucked the opportunity away—a Route 1 goal if there ever was one.


Things @mPinoe just did: THAT

The U.S. certainly didn’t dominate the contest, and made far too many technical mistakes. And for their part, the Germans generated more than a few chances of their own. However, the Americans didn’t produce a “lucky” win, nor did the Germans play dominate possession. It proved to be a back and forth contest with the U.S.’ high pressure actually dictating the tempo through much of the second half, despite the fact the U.S. had strong winds in their face throughout the second stanza.


Last year’s SheBelieves Cup also started well, with a 1-0 win over Germany. From there, the wheels fell off the cart and the Americans fell to England before being humiliated by France in the final game.

This year, however, feels different. Gone is the 3-back which Ellis never seemed to deploy with the right personnel and, this past summer, in came the 4-3-3. Since then, the Americans haven’t lost, going unbeaten in their last 10 games with victories over quality sides in Brazil, Japan, Canada, Denmark, and now Germany.

Next up is France on Sunday in Harrison, New Jersey (noon ET, ESPN2).