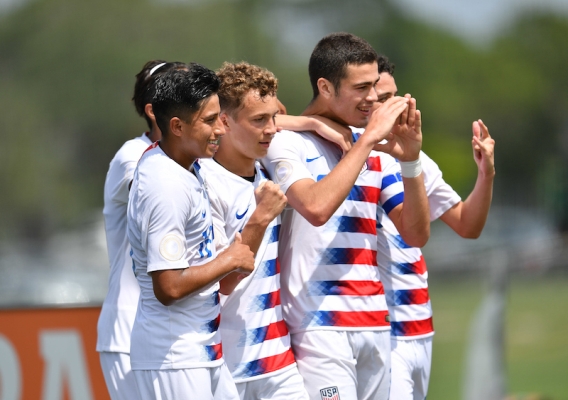 Three thoughts on the U.S. U-17s 3-0 win over Panama to clinch qualification

The United States U-17 team is through to the U-17 World Cup with a convincing win over Panama. ASN's Brian Sciaretta is here to breakdown the game and look ahead to the rest of the tournament.
BY Brian Sciaretta Posted
May 13, 2019
6:00 AM
THE UNITED STATES U-17 national team qualified for the World Cup this fall when it downed Panama 3-0 in Bradenton behind second half goals from Gianluca Busio, Giovanni Reyna, and Ricardo Pepi.

The United States dominated possession throughout the game and squandered many opportunities in the first half to make the game closer than it should have been. Overall, the U.S. team outshot Panama 21-2 in a lopsided effort.

Just two minutes after blowing a very easy chance, Gianluca Busio gave the U.S. team a 1-0 lead in the 54th minute with a low shot from inside the box which was assisted by Alfonso Ocampo-Chavez. In the 60th minute, captain Giovanni Reyna converted a penalty that was drawn by Ocampo-Chavez.

Finally in the 75th minute, the United States rounded out the scoring when Ricardo Pepi took a pass from Daniel Leyva in a dangerous position and moved in on Panamanian goalkeeper Saul Espinosa and beat him with a shot to the far post.


Of all the goals since the Canada game, the third goal against Panama was the most important because it got Pepi on the scoresheet for the first time in this tournament. The talented-Texan was unable to score in the team’s first four games and his confidence was an issue. Widely considered one of the team’s best players, Pepi should now have more confidence heading into the semifinals against Canada.

It would be very interesting to see if Wicky can get his best two forwards in Ocampo-Chavez and Pepi to play together at the same time. That would be very difficult for opponents to stop.


Daniel Leyva only joined the U.S. U-17 team for the first time for a camp in April but he is doing extremely well in this tournament. He has been a big addition to the midfield that really allows Reyna and Busio to move further into dangerous positions.

Leyva joins this team on the heels of winning the MVP at the recent GA Cup where he helped Seattle win the title with wins over Flamengo, River Plate, West Ham, and Valencia in the final. With a first team contract with Seattle, his development will be interesting to watch this year. Expect him to make his debut with the Seattle Sounders at some point in 2019 – albeit with limited minutes. Seattle has invested a lot with its wave of signing young players and it will want to send a message to these players that there is a pathway to the first team. Leyva looks most ready right now.


The United States will next face Canada in the semifinals. The pressure should be off for both teams as the top priority of qualification has already been achieved. If the U.S. teams loses with many backups to Canada, that will be a disappointment that will soon be forgotten.

The U.S. team should aim to have a first-choice team ready for Thursday’s final – likely against Mexico. Even with qualification secure, that will be an important game where the U.S. team must be at full strength.

Canada gave the U.S. team a tough test in the opening game as Canada took a 2-0 lead into the half before the Americans rallied with three goals. Still, the U.S. mostly controlled possession and had more opportunities overall. Canada took advantage of a poor defensive spell where it scored two goals over two minutes. Since then, the U.S. team has looked more focused.

Canada is on the rise in CONCACAF and is producing better players these days. That is a welcome sign for the United States who could soon reestablish a rivalry with his northern neighbor. Canada’s Jayden Nelson has five goals in this tournament and will be a test for the U.S. team on Tuesday. Meanwhile, Gianluca Busio also has five goals and both players are in the hunt for the tournament’s Golden Boot award – trailing Costa Rica’s Geancarlo Castro who has seven goals but will not play anymore in the tournament as Costa Rica was eliminated by Canada on Sunday.