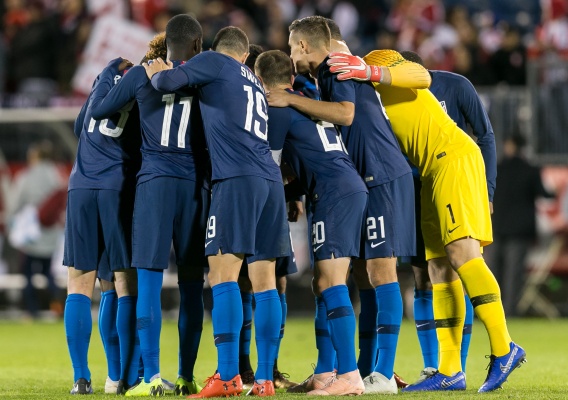 Three Thoughts on the U.S. team's 1-1 draw with Peru in Hartford

What is there to take away from the U.S. national team's 1-1 draw against Peru on Tuesday? ASN's Brian Sciaretta is here with some insight
BY Brian Sciaretta Posted
October 16, 2018
7:00 PM
IN SOCCER, friendlies should be learning opportunities and with nothing on the line, coaches should feel at liberty to experience. On Tuesday night in Hartford, United States interim boss Dave Sarachan certainly took chances.

He started a very inexperienced team with an overwhelming majority of players having no experience in World Cup qualifying or any other meaningful international competition. In the end, it finished a 1-1 draw but most valuable were the lessons learned.


The best news for the U.S. team is that the three debutants in the starting lineup all played well. Aaron Long looked smart confident alongside Cameron Carter-Vickers in central defend. Jonathan Amon has a world of skill and a very high ceiling – even if he has a lot to work on.

Reggie Cannon might have been the best of the three on the night with a very good outing at right back. It was a complete performance from the FC Dallas product as Cannon conceded nothing down his side of the field and moved forward well. While Shaq Moore has played well with U.S. team at times, he was never able to get forward as well as Cannon did tonight.

This game further added to the team’s depth, regardless of whoever the next coach is. Aaron Long deserves to be in the mix to back-up the consensus starters in Matt Miazga and John Brooks. The team needs speed on the wings and Amon will provide that – even if he is still part of the U.S. U-20 team. Cannon should be DeAndre Yedlin’s backup and the U.S.U-23 starter.


The game was most frustrating for the U.S. team in the central midfield triangle of Wil Trapp, Marky Delgado, and Kellyn Acosta. Possession was frequently lost in this area of the field. That gave Peru too much possession which eventually resulted in an equalizer.

Delgado was the best of the midfielders over the full 90 minutes and Acosta had a nice assists, but Trapp once against struggled in a physical setting. He needs too much space and time to make a crisp pass. For U.S. national team fans, it is reminiscent of Jose Francisco Torres who looked great for his clubs in Mexico because he had all day to make passes. Then at the international level, it didn’t translate.

The problem is that when Trapp struggles, it makes it harder on many of the other players. Delgado and Acosta have to sit deeper and there are not a lot of options to play the ball forward.

Delgado made mistakes for sure but also had more moments where he connected dangerous passes forward and advanced the play.

This team will be helped tremendously when Weston McKenie and Tyler Adams join the team. There are also other options like Russell Canouse – who is making a strong case for a call-up.

The problem with the midfield combo of Acosta, Trapp, and Delgado isn’t necessarily the turnovers. That should improve with time as the entire new core of the team becomes more familiar with each other. The problem with these players is that neither of them are particularly good at winning the ball back once possession is lost. That is where Adams and McKennie excel.

Kellyn Acosta and Marky Delgado still deserve call-ups but minutes will be harder to come by when McKennie and Adams return. Trapp might have problems in the future although if the next coach is Gregg Berhalter, he might find a way to get the best out of Trapp.


Josh Sargent was very impressive in the game, and it’s wasn’t just the goal. He was comfortable on the ball and is effective in hold up play.

But the best attribute for Sargent is the way he reads the game. He knows when and where to make runs and where he has to be at all times. He will get better as he gets more experience, but he’s at a good starting point.

The start of the second half really showcased his strengths. In the opening minutes he set up Tim Weah for a golden chance after holding the ball up well. Then he scored a goal when he took a free kick pass from Acosta and hit a nice shot for the goal.