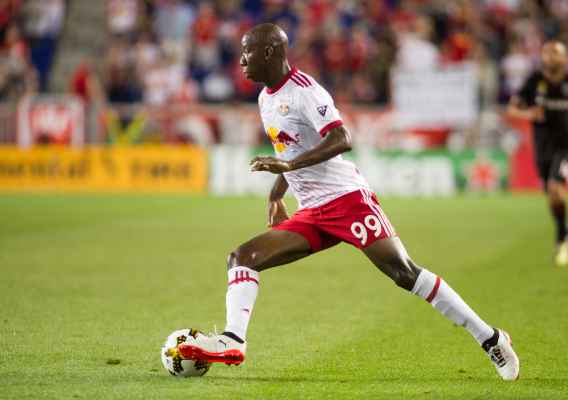 It was a great win for the New York Red Bulls who return home from Mexico with a 2-0 advantage and two precious away goals. From Luis Robles to Tim Parker, to Bradley Wright-Phillips, there is a lot to talk about in this game and Red Bulls expert Mark Fishkin breaks it down.
BY Mark Fishkin Posted
March 06, 2018
10:00 AM
It was definitely a night to remember as it sets up for a potentially historic second leg. The game had it all: excitment, huge performances from players who raised their game, the U.S. - Mexico rivalry, and locally developed players.

With all that said, here are my hree thoughts on the Red Bulls’ Historic Win in Mexico


Tuesday night at Estadio Caliente in Tijuana, the youngest team in MLS got supernatural performances from its pair of thirty-somethings to overcome and will now take a commanding two-nil lead in the New York’s Concacaf Champions League Quarterfinal tie. The Red Bulls will attempt to finish the job next Tuesday night at Red Bull Arena, and advance to the regional Final Four for the first time in club history.

Bradley Wright-Phillips scored his 102nd and 103rd goals for the Red Bulls to power New York. His first, a roofed ball from inside the six, gave New York a deserved 1-0 lead in the ninth minute.

His second, however, was simply spectacular. Taking a ball from Florian Valot at the edge of the Xolos box, Wright-Phillips, surrounded by four Tijuana defenders, skipped the ball inside the left post for a valuable second away goal in the sixty-seventh.

At the other end was captain Luis Robles, who put a simply legendary performance, making thirteen saves, and jogging American Soccer fans’ memories back to Kasey Keller’s shut out of Brazil in the Rose Bowl in 1998, or Tim Howard’s career match against Belgium in the 2014 World Cup. Robles was simply everywhere, making flying stops, and smothering wobbly balls taking funky bounces off the Estadio Caliente turf.

A credit to Robles’ character, after the match, the Red Bulls keeper credited his back line.

“Well, the defense played great,” Robles said. “If anything, they made my job a little easier tonight, with the shots that I faced. Especially at the end, for them to sacrifice their body, and put everything into it, I think the whole defense should be Man of the Match tonight.”

Robles, as per usual, is being humble. Newly arrived Tim Parker, acquired late last week in a trade with Vancouver, was thrust into a starting role after just 36 hours with the Red Bulls. The St. John’s grad made a few very rough tackles in the early going but settled down as the night wore on.

Amir Murillo rebounded from a poor performance in the second leg against Olimpia in New York’s last match to consistently clear balls on the left side of the Red Bulls’ defense. Kemar Lawrence blocked shots throughout the second half, and Aaron Long used his typically physical presence to slow down the Xolos attack.

The Xolos should have had a goal midway through the second half, but a questionable offside call went against the home side.

Lining Up for Leg Two


The night wasn’t completely positive from New York’s point of view, however. A Sean Davis yellow card in the first half will keep the Homegrown player out of the second leg in Harrison next week, and newcomer and midfield sparkplug Marc Rzatkowski suffered a hamstring injury in the second half. His prognosis has yet to be shared.

The Red Bulls will face Portland Timbers in Saturday Night at Red Bull Arena in the home side’s 2018 MLS Opener, then battle the Xolos again on Tuesday night with a trip to the club’s first-ever CCL Semifinals on the line.

New York fans should expect a completely rotated lineup against Portland. Both Collin and Rivas staying back in the US (the former working out a green card). Kaku Gamarra, whom Jesse Marsch kept on the bench, should get the league start, as should Vincent Bezecourt, who was also held out of last night’s win.

Marsch will rightly rest his stars for battle in the CCL second leg, a vastly more important match than an early regular-season contest against a Western Conference opponent.

One for the Record Books


Surely the win over the Xolos ranks with the most important victories in club history, with the 2008 Western Conference Final win at RSL, last season’s US Open Cup Semifinal comeback victory at Cincinnati, the 2013 season finale home victory over Chicago that delivered New York’s first Supporters Shield, and the 2016 seven-nil win at Yankee Stadium.

New York has long been a standard-bearer in terms of building its roster from within, but in the second half, with the match on the line, the Red Bulls turned to its own products to help deliver the win.


The fact that the Red Bulls won with such a heavy contribution from local talent is fitting. This club, perhaps more than any other team in MLS, has such a strong legacy of developing local players. This is evident in the long line of players from the Tri-State area it has sent to either Europe and/or the U.S. national team. It is a legacy other MLS clubs should try to emulate.

This list of local alumni includes Tim Howard, Michael Bradley, Jozy Altidore, Matt Miazga, Juan Agudelo who all started their careers there and made it to the U.S. team. Other players like Tim Ream are not local but also developed within the Red Bulls system. Now there is a new generation led by Tyler Adams, Sean Davis, and Alex Muyl and it will be interesting to see where this group can lead the team. Last night's win was a great step.