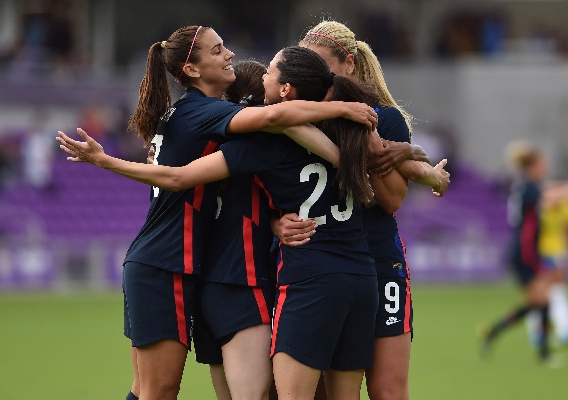 IN ITS SECOND match of the SheBelieves Cup, the United States women’s national team downed Brazil 2-0 and put itself in the driver’s seat heading into the final game of the tournament. The Americans tallied on both sides of the halftime break with Christen Press striking early in the 11th minute and Megan Rapinoe adding a late goal in the 88th minute to secure the result.

A MIXED BAG IN THE BACK

The United States picked up its second shutout in the tournament, and both matches thus far have been against solid competition in Canada and Brazil—who are tied with each other at the No. 8 spot in FIFA’s latest rankings.

The team also benefitted from strong performances out of Crystal Dunn and Becky Sauerbrunn in the match. Dunn made a tremendous tracking run in the 13th minute to stop one of Brazil’s most promising attacks when she stuffed Ludmila just as she was about to fire a shot on an open chance from eight yards out and also contributed her normal excellence in the attack.

Sauerbrunn, for her part, did well cleaning up a number of messes in the middle and in multiple 1-on-1 situations with the speedy and tricky Brazilian attackers. In the 24th minute, Sauerbrunn couldn’t quite keep up in a footrace with Ludmila on a long run down the field, but the American defender did just enough to push the attacker wide and force her to take a shot from a poor angle. 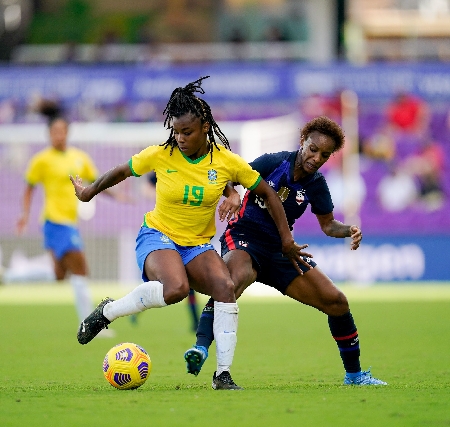 The other two defenders on the U.S. backline, however, were not as good. Debinha torched Abby Dahlkemper on the turn to create the dangerous sequence Dunn cleaned up early in the match and also got beat by Marta on another dicey play in the first half.

Emily Sonnett struggled in multiple areas of her game, losing possession in dangerous areas, getting beat 1 v. 1, leaving her feet, and even missing an important clearance in the 82nd minute. And in the final 10 minutes of the match, with the score still 1-0, she allowed Debinha to get inside her and get off a header in the six.

For the past two and a half years, Christen Press has become a clutch player for the U.S. and needs to be in the starting lineup every time the team is facing a must-win game.

Once again, on Sunday afternoon, Press proved this, bagging the game-winner in just the 11th minute. On the play, she cut inside Bruna Benites on the edge of the box and tucked a beautiful solo effort neatly into the side netting of the far post while Brazilian goalkeeper Barbara looked on helplessly.

For a long time, Press had a reputation as being a player who excelled at the club level, but could never seem to fully find her form on the international level. That has changed over the past two years as she has begun to regularly get herself on the scoreline for the U.S. in big games.

Other than Press, no one in particular has impressed in the forward core thus far in the tournament. Lloyd hasn’t made a significant impact in either match and Rapinoe struggled to do much in the game against Canada. Against Brazil, however, she did hit a solid volley to score and seal the win.

Lynn Williams has earned two starts and created opportunities on the offensive end as well as chaos with the U.S.’ opponents when they’ve had the ball. And while Williams has struggled to deliver a final product so far in the tournament, she clearly has enough other qualities to continue justifying her starts in the U.S. lineup. 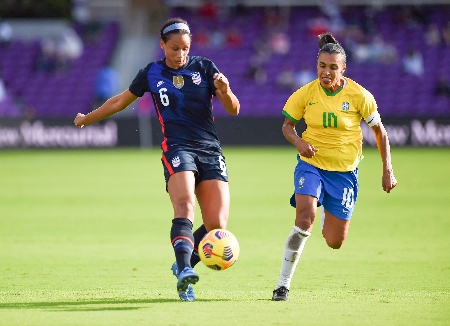 Sophia Smith saw the field in a 25-minute cameo on Sunday, but her sense of being overwhelmed by the situation seemed palpable. She had several good opportunities on the dribble in the attacking third with the time and space needed to create, but wasted them all with shaky touches that seemed to bely a nervousness on this stage. Taking her to the Olympics with such a small roster is simply a luxury that head coach Vlatko Andonovski can’t afford.

The Americans play Argentina in the final match of the tournament on Wednesday at 7 p.m. ET on FS1.