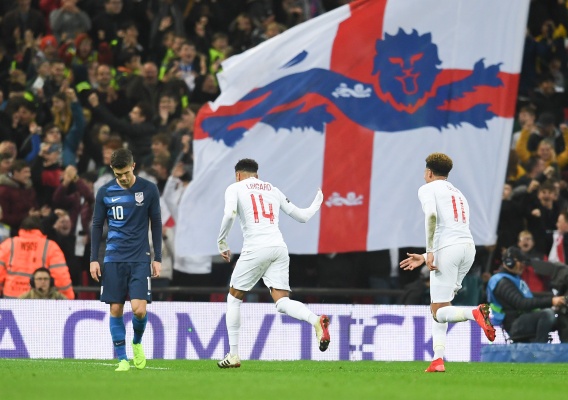 Three thoughts as the USMNT is overmatched in loss to England

The game was really hard to watch for long stretches but the U.S. team failed to put up much of a fight against England on Thursday night and will now look to rebound against Italy in its 2018 finale.
BY Brian Sciaretta Posted
November 15, 2018
1:00 PM
THE UNITED STATES national team did not put up much of a fight against England en route to a 3-0 loss at Wembley Stadium on Thursday night. The Lions were in charge from the opening minutes and the result was never in doubt.

Not much went right for the Americans on the night. The U.S team was able to muster up a few chances, the best being a move by Christian Pulisic in the first half which sent him in alone on keeper Jordan Pickford only to come up short.


The United States was overmatched in too many areas of the field. The U.S. team was forced into its bunker on too many occasions and when it did manage to hold the ball for a few passes, it turned the ball over in dangerous positions.

Central defense was beaten on too many occasions .Whenever the U.S. team was able to make a play out wide, its crosses were routinely ineffective.

Midfield was always expected to be a losing battle but the U.S. had its openings at times but simply did not know how to take advantage of chances. Julian Green as a No. 10 was ineffective and his recent struggles at the club level with Greuther Furth carried over into the game.

All of this made it so that Bobby Wood and Tim Weah were essentially taken out of the game as offensive threats.

The U.S. simply was well short of England in too many areas of the field.

Team defense was atrocious. Pulisic was caught in “no man’s land” on the opener from Jesse Lingard. The second from Trent Alexander-Arnold was simply too easy as he moved into the box with ease. And John Brooks gave up too much of his position to Callum Wilson on the third goal.

But in terms of defense, the U.S. team had too much difficulty winning the ball back after possession was lost. It didn’t force turnovers to spring counter-attacks, and it didn’t regain possession to stop having to chase the game. It’s best run was early in the second half but fatigue set in very quickly after that once England regained momentum.

U.S. interim head coach Dave Sarachan is in the final stages of a tenure that will last about a year. During that time he has called up a lot of interesting players and players who will have a long future with the team. There really haven’t many players who you could claim have been overlooked.

But a new coach needs to be brought in soon to build a game plan. The next coach will likely use most of the same players but these players are versatile and there needs to be a set system in place with how the team plays. An interim head coach can’t really set or implement a long-term vision for the team and with the players having been identified, that long-term approach is needed sooner than later to begin moving forward.

It is true that no coach at the moment is going to make the United States anything other than a major underdog against England, but without someone who can begin implementing the team with a vision geared towards this cycle, it’s going to be at a disadvantage.