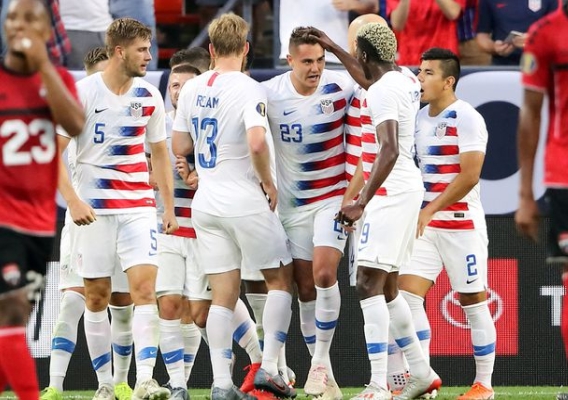 The USMNT finally had a performance that should please the players, coaches, and fans. Yes, harder competition awaits but the U.S. team did what it should do - and should have done - against the minnows of the region. ASN's Brian Sciaretta looks at result in Cleveland.
BY Brian Sciaretta Posted
June 22, 2019
3:00 PM
FOR THE FIRST time in a while, there was little to be critical of following a United States men’s national team game. With a lot of the pregame talk surrounding the last time the team faced Trinidad & Tobago, this time the U.S. team did what it should have done 20 months ago – come away with a convincing win.

With the 6-0 rout, the U.S. team now has six points from its first two games of the Gold Cup and has clinched a spot in the quarterfinals. A draw in Wednesday’s group stage finale against Panama would secure first place in Group D.

But more importantly for the U.S. team, it did not play down to the level of its opponent and either fall short or merely squeak by with a narrow result. This time, the U.S. team cruised past Trinidad & Tobago. While the score was only 1-0 at halftime, it seemed as if it was only a matter of time before the dam would burst – and it did with five second half goals.

Aaron Long and Gyasi Zardes each had two goals while Christian Pulisic and Paul Arriola each had one. The truth is that no American player had a bad game. While talented players should dominate a game like this, history has shown that sometimes it is easier said than done. Tonight, it happened and the U.S. team played up to the sum of its parts.

Here are some specific thoughts


The U.S. team has often lacked a real disruptive physical edge in the midfield. Tonight, McKennie provided that in droves. McKennie has skill on the ball but his ability on the defensive side to win balls and not let opponents set up in the middle of the field is a huge edge. He was a big reason why the U.S. team had such an easy time against Trinidad & Tobago.

On the first goal, Weston Mckennie was able to maintain possession under pressure before playing it to Christian Pulisic who assisted to Aaron Long. Then in the second half, he got into a scuffle with an opposing player that seemed to shift the tone of the game and the U.S. team had five goals after that point.


The #USMNT take the lead on T&T. Great pass from Pulisic here to set up Aaron Long for the finish pic.twitter.com/fbqfnEp4YW

But Mckennie was so strong on both sides of the ball that it helped to elevate his teammates.


The U.S. team was very strong on the wings. Tyler Boyd earned the start and was once again a handful for Trinidad & Tobago. He was able to combine well with Nick Lima (who had a very good game as well) and regularly get into dangerous positions. His shot from distance was also solid enough to force defenders to stretch out as to not give him space.

It seemed puzzling as to why Boyd came out in the 61st minute as he was the best U.S. attacker up to that point. But Jordan Morris came in and did a very good job as well. The Seattle Sounder assisted twice and was in the position to score on two other occasions.

Paul Arriola continued to show he is consistent under Gregg Berhalter’s system. He scored the team’s fifth goal and nearly scored a spectacular goal late in the game but was denied by the crossbar.

Paul Arriola picks up his second of #GoldCup2019 and the USMNT are running away with it! pic.twitter.com/q7RW90gUX0

Getting wing production has been lackluster in recent years for the U.S. team but it is showing signs of improving recently. The proof, however, will be when the U.S. team plays tougher opponents later in the tournament.


Make no mistake, the best player on the field tonight was Christian Pulisic who had a goal and two assists, but simply did a lot to open up the game for the rest of his teammates. He did what you expect from a player who has Champions League experience and who transferred to Chelsea for an enormous sum. He wasn’t that great in the first half but was magnificent in the second.


In the words of @stuholden:

Watching the second half, he was involved in at least the build-up to nearly double digit solid scoring opportunities.

Every player was a positive


If you go through the list of U.S. players who played, everyone had a positive impact on the game. The often-maligned Gyasi Zardes had two goals and both were quality plays. His first goal was a tap-in but he made a very solid play in the build-up. Michael Bradley was in top form in central midfield. Nick Lima looked like a steady right back. Jozy Altidore came on late in the game and was sharp.

Not often you can say that there was no weak link, but that was the case today.

After a long period of constant criticism from the start of camp and heightened by the poor pre-Gold Cup friendlies, the team should feel relieved that it can have a performance that leaves the players, coaches, and fans satisfied.