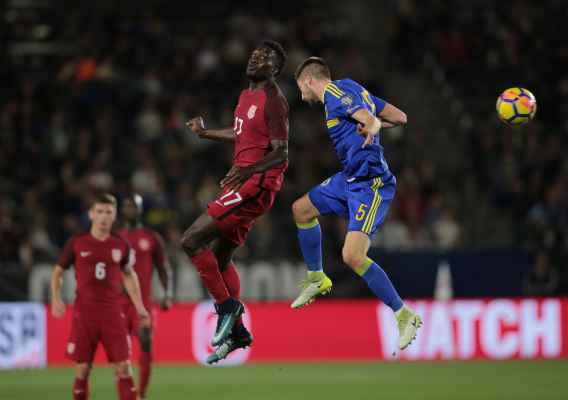 Thoughts on the USMNT - Bosnia friendly

In a game that will be quickly forgotten, ASN's Brian Sciaretta offers his thoughts up on the U.S. national team's dull draw against Bosnia and Herzegovina to conclude January camp and kickoff a new cycle earlier than had expected.
BY Brian Sciaretta Posted
January 29, 2018
12:30 AM
JANUARY CAMP FRIENDLIES are often very difficult to draw meaningful conclusions. The players are in preseason and are often rusty. This year’s edition in a scoreless draw against Bosnia and Herzegovina, however, seemed more than a typical letdown.

As Marky Delgado told ASN before the game, he was hoping that the team could put on a show. Delgado went as an unused sub in the game but he was right.

This game was an opportunity more for the players to get introduced to the national team scene as opposed to building for anything in particular. As an interim coach, Dave Sarachan is simply just trying to keep the program moving forward so that the next coach actually inherits a team of prepared players.

That being said, this year was also an opportunity to give the fans something positive think about for a day besides reality of the team missing out on the World Cup and the increasingly disappointing U.S. Soccer presidential election.

In the end, the team did not put on a very good show for the fans. It was a typical January camp game. There were a few good moments but mostly it consisted of long stretches of nothing. In most years that is fine. But the team really could have used an atypically positive performance just for moral alone. Instead, it simply added to the disappointing reality of the U.S. national team at the moment.

Here are my thoughts from the game.


Like any other coach, Sarachan was limited in his options this January camp. To his credit, there were no major snubs left out of camp this year – especially with FC Dallas not releasing any of its players.

It is not his fault there are no effective young No. 10 playmakers in MLS. That was a huge problem with the starting lineup and there is nothing Sarachan could do about that.

But even with the absence of a No. 10 there are ways to attack and Sarachan didn’t do that. He should have tried to open up the game from the flanks. Instead, his winger selections let the team down.

Jordan Morris has speed and can be effective in the right role. But he is not a winger, he is a forward. Similarly, Gyasi Zardes has not been effective for either the Galax or the U.S. team in quite some time. In his history, Zardes sometimes can make nice plays but is rarely dangerous over the course of an entire game.

The absence of a No. 10 and the use of two forwards out of position on the wings really stifled the attack. It made it extremely easy for Bosnia to shut down Tyler Adams and Cristian Roldan who really suffered because of the lineup selection and formation.

The second half was better with the substitutions, but by that point many of the surrounding players on the team were simply tired based on preseason form. But what was better is that Kellyn Rown came in and he was able to create some opportunities. The sequence when Juan Agudelo hit a beautiful pass into the box and Rowe was able to skillfully set up Morris was the best moment of the game. Having those wingers also opened up the door for the fullbacks as well and right back Matt Polster was able to push forward with wingers in front of him.

But it begged the question as to why Arriola and Rowe didn’t start on the wings from the beginning. A 4-4-2 formation might also have worked with Sapong and Morris up top.

Opara was the best player


If there is one player who should walk away feeling especially proud of his performance, it is Ike Opara. The often-injured Sporting Kansas City central defender had a very good game. He handled Bosnia’s set pieces with easy. He broke up dangerous chances and helped to bail out his teams whenever there were breakdowns.

Moving forward Opara is unlikely to be a starter on this team when the full selection of players is available. Assuming the previous generation of Tim Ream, Geoff Cameron, and Matt Besler is phased out, John Brooks and Matt Miazga seem to have a firm grip to start the cycle. Erik Palmer-Brown is talented but needs to start getting games and Cameron Carter-Vickers needs to continue to put his slump behind him.

But Opara did enough to earn future call-ups and compete for a back-up role.


Another player who impressed was CJ Sapong. Typically his finishing can be streaky and against Bosnia his final ball was off – which might very well have been due to preseason rust.

But when watching Sapong against Bosnia and against Portugal back in November, it is clear he has value. First, he does get himself into very dangerous positions. He reads the game and knows where to be. Also, he is very mobile for a forward of his size. At 6’1”, he can be tough to mark in the box and can make runs in an open field. Physically, he battle with central defenders. The point is that even when he doesn’t score, he is helping his team.

Of course Sapong is not young at 29. The problem for the U.S. team is that there are not many young forwards knocking at the door right now. There is a lot of hope on Josh Sargent but he is 17 and yet to play a minute of professional soccer.

The U.S. national team might have to rely on forwards in their mid to late 20’s for a few years until a younger group emerges. If that is the case, Sapong might be part of bridging the current generational gap at the position. So far, he has acquitted himself well.