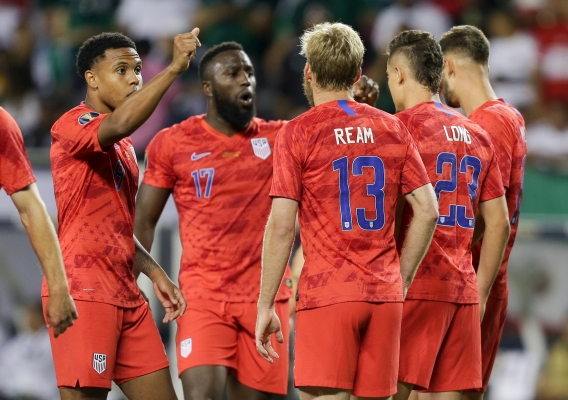 It is a loss that will certainly sting for quite some time as the USMNT lost to Mexico 1-0 in the Gold Cup final. The U.S. team had its chances but did not finish. ASN's Brian Sciaretta looks at the performance and the big picture
BY Brian Sciaretta Posted
July 08, 2019
12:00 AM
IN THE first major test for new manager Gregg Berhalter, the United States national team fell to Mexico 1-0 in the final of the Gold Cup. It was a very difficult loss to take because it wasn’t for a lack of opportunities to score which doomed the U.S. effort in Chicago.

The U.S. national team came out flying and had its best chance early when Jozy Altidore took a long ball from Tim Ream and beat his defender only to scuff his shot once alone on Mexican goalkeeper Guillermo Ochoa. Minute later, Christian Pulisic also had a shot from close range that was saved by Ochoa.

The U.S. team had another chance in the first half when Paul Arriola intercepted a lazy ball floating back to Ochoa and had a shot from a very tight angle which he missed just wide.

In the second half, the U.S. team once again nearly found the lead when Jordan Morris headed a corner that was cleared off the line.

Mexico raised its game after that big U.S. chance at the start of the half but the U.S. backline was strong. But in the 75th minute Mexico took advantage of its building momentum when a Weston McKennie turnover sprung Mexico into the attack. Jonathan Dos Santos took a ball from Raul Jiminez inside the box and set a ball past a helpless Zack Steffen for a goal.


The U.S. team had a few more opportunities down the stretch but mostly off corners. Eventually, however, the final whistle sounded and Mexico walked away with the 2019 Gold Cup trophy.


Mexico did not have a great start but Tata Martino made key adjustments. He inverted wingers, he made key subs, he knew how to take advantage of a tiring opponent – overall he put his team in the best position to win.

As for Berhalter, he got a starting lineup that was able to create chances. That was good and most of the time, those chance result in at least one goal. But when the goals didn’t come, his substitutions didn’t get the job done.

Not bringing in Tyler Boyd was questionable since he is offensively oriented. Taking out Altidore was also a tough move since Altidore’s holdup play was a tremendous asset in the first half.

Altidore missed a big chance, but helped the team


The Jozy Altidore miss in the first half was tough to watch. The Toronto striker actually made a great move off the ball from Time Ream to get past his defender, the finishing was awful. But Altidore really showed his value in terms of his hold-up play helping out his teammates.

In this area of the game, he is much more valuable than center forwards in the player pool. This is a huge weak spot of the player pool and Altidore needs to stay healthy until the other young options like Josh Sargent, Sebastian Soto, or other young players emerge.

Cannon and Long prove they belong


Looking at the defense the first point is that Reggie Cannon, 21, was immense despite the loss to Mexico. He was one of the best players on the field – both offensively and defensively. Combined with an absent DeAndre Yedlin and an emerging Sergino Dest, the U.S. team is solid at right back and playing Tyler Adams there does not seem to be a necessary idea.

But Cannon was a true asset moving forward and showed that he can also be an option dribbling the ball up the flank, not merely making runs waiting to receive the ball. Defensively, nothing really got past him.

As for Aaron Long, he was shortly named to the Gold Cup team of the tournament and it is hard to argue with it. The New York Red Bulls defender cleaned up a lot of chances and grew to being a big presence in the box. If there was every any doubt that Long belonged in the top 23 of the team, he erased them.


Paul Arriola is not the most polished technical player but it is also clear that he has a role on this team. His defense, engine, and intense competitiveness are very useful traits. He might not always start for the U.S. team but he also belongs on the 23-player roster. Unlike many wingers in the pool, Arriola is excellent at tracking back to force turnovers and break-up plays. That is very important in Berhalter’s system.

Offensively, Arriola is decent in 1v1 situations but should find himself in better situations when Pulisic is on the field. He also has one of the better shots from distance on the team.

A lot of coaches have player that they favor for reasons of competitiveness and scrappy play. For years Frankie Hedjuk was that kind of a player for the U.S team. It’s easy to see Arriola fitting into that kind of role.

McKennie was up and down


In this tournament, Weston McKennie displayed why he is a solid Bundesliga player. He can be a physical presence defensively and is intensely competitive. He also hit some first-rate passes that few in the pool can hit – both in range and in vision. But McKennie can also hit some sloppy passes that turn the ball over in bad areas – he was the main culprit on Mexico’s goal in the final.

Fortunately for him, in his young age he can improve in his weaknesses. If he cuts back on the turnovers and sloppy passes, he can be outstanding at the international level.

One thing I think to watch this season and something that could help him would be for him to stick to one or two roles at Schalke and grow. Last season was a big step back for Schalke in the Bundesliga and McKennie was asked to play a lot of different positions and roles – too many. In the end, it wasn’t great for his development.

If Schalke can rebound and McKennie can settle into a position, it would pay big dividends to his game.

Zack Steffen: Distribution wasn’t great but he made all of the stops that could be expected of him. There was nothing he could do on the goal. Rating: 6
Reggie Cannon: Was excellent in a surprise start at right back. He excelled on both sides of the ball. Rating: 7.5
Aaron Long: Another strong presence in the backline and did his best to limit Mexico’s chances: Rating 7.5
Matt Miazga: The New Jersey native was also important in the backline and had good chemistry with Long: Rating 6.5
Tim Ream: Defensively he was strong in the first half and should have had an assist on Altidore’s big chance. Wasn’t a threat going forward but handled his most important tasks. Rating: 6.0
Michael Bradley: Was strong in the first half and had one of his better defensive shifts in quite some time. As usual, he made some effective passes. He tired in the second half but overall was decent. Rating: 5.5
Paul Arriola: The DC United winger was a workhorse and was very strong defensively. He was able to play with the intensity the game required. Offensively, he had a few moments but needed to be more dangerous. Rating: 6.0
Christian Pulisic: As expected, Pulisic was the most dangerous American player and he showed a lot of comfort dribbling in tight spaces and making key runs. Rating: 8.0
Weston Mckennie: The Texan had some nice moments but also was too sloppy on the ball on a few occasions – one of which led to the Mexican goal. He clearly antagonized Mexico and should have drawn a red card for having Guardado grab him by the throat. Rating: 5.5
Jordan Morris: Struggled to get involved offensively and into places where he could be dangerous: Rating: 4.5
Jozy Altidore: His hold-up play allowed his teammates to get involved and he showed that he still can be an important part of the team. His big miss, however, was costly – despite the fact he made a very nice move to create the chance. Rating: 5.5


Gyasi Zardes: Came on for Altidore and didn't offer much to turn the tide of Mexico: Rating: 4.0
Cristian Roldan: Made a few nice plays to keep possession and win corners but didn't create any chances from the run of play: Rating: 5.0
Daniel Lovitz: Tough for a defender to be a sub in a game where the team is trailing, but Lovitz played some nice balls forward late while the team was trailing. Rating: 5.0