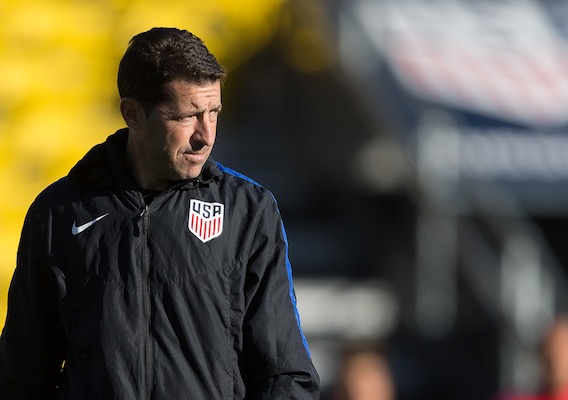 Mega camp is a great idea


The first takeaway, obviously, is that this camp is a great idea. Having 153 of the top American teenagers (excluding those injured or on the full national team), makes for a great scouting opportunity. It was not long ago when there was just the U-20 and U-17 teams getting emphasis with the U-18 team occasionally having a camp.

Now there is heavy emphasis on the U-16, U-18, and U-19 teams and it keeps more players involved in the system. It expands the overall youth player pool and that is absolutely critical for many reasons, one being that it provides for easier scouting and an opportunity for coaches to compare notes. Now as a new cycle kicks off for the various national teams, coaches like Tab Ramos and John Hackworth will be able to evaluate a huge number of player and allow for a strong start for their cycles.

Will there continue to be players like Keaton Parks who don’t get involved with youth national teams until too late? Yes. But there will be far fewer of them. Part of talent identification is not just scouting from tape or in experimental camps, but rather getting players into an environment where coaches can make accurate assessments.

Over the course of the next year, some players will fall off while others force their way into the equations. That happens all the time. But keeping the player pool large helps in the pipeline up to the full national team.


With such a large number of players assembling in Florida, it is impossible to list the many highlights. Trey Muse has been an exceptional goalkeeper in college this year for Indiana. Christian Cappis at FC Dallas is also highly regarded at FC Dallas. It will also be interesting to watch George Bello grow with the U-17 team as the Atlanta United right back has enormous potential. Griffin Dorsey was a Developmental Academy conference player of the year.

But the most exciting inclusion is Jonathan Amon with the U-20 team. Amon has broken into FC Nordsjaelland’s first team and has helped the club surge to third place in the Danish Superliga. As an explosive winger, Amon is seen as a top prospect in Denmark. He is one of 19 players at the entire camp who is based on an international club

Amon last played for the United States at the U-14 level but he moved to Europe in unusual circumstances and Nordsjaelland actually took steps to hide his visibility so other clubs would not sign him before his 18th birthday. When he turned 18 this year, he signed a four year deal with Nordsjaelland.

But Amon is already getting valuable first team minutes and is impressing. That is very important for Tab Ramos who could also have players like Jonathan Gonzalez and Tyler Adams available at the 2019 U-20 World Cup.


The 2017 U-17 team was very good as it advanced to the quarterfinals before losing to eventual champions England. While Josh Sargent will head to Germany in January to play for Werder Bremen in its winter break camp, there is still a large number of players from that U-17 World Cup team that will be in Florida next week.

Of these recent U-17 players, one particular note is that New Jersey’s Christopher Gloster is now listed as unattached where he was previously tied to the Red Bulls. There are signs that Gloster might try to head abroad sooner than later with Schalke showing interest.

The same could be said for midfielder Taylor Booth who the Washington Post reported on Friday is attracting interest from Bayern Munich and might forego a homegrown offer from Real Salt Lake.

After Josh Sargent’s move to Werder Bremen, many of the U-17 players are at a crossroads in their careers. For some, going abroad might be the best option. For others, however, staying at home to start a career, earning first team MLS minutes, and then making a move in their early 20’s might be a better option.

It also puts MLS at a crossroads too. It is a shame that many clubs are investing significant money in youth development and receiving nothing for key prospects that move abroad before they sign homegrown deals. It would be healthy to see teams get rewarded for good development but there are concerns. Last year, FC Dallas lost Weston McKennie for nothing to Schalke after he spent over six years in the academy. Now the Red Bulls might lose Gloster and Real Salt Lake might lose Booth.

At the same point, MLS clubs are not good at giving young American players key minutes. When that improves, the league’s teams will have a better chance at signing homegrown players. A healthy environment will take place when MLS teams can sign these players, play them at young ages, and be willing to sell them. That being said, the Red Bulls and Real Salt Lake have been among the better teams in the league at playing young American players already.

U-20 defense is a concern


The United States U-20 national team has been successful the past two cycles in large part to the outstanding central defenders it has produced. Between 2015 and 2017, Matt Miazga, Justen Glad, Erik Palmer-Brown, and Cameron Carter-Vickers have anchored the backline. All four look as if they will contend for minutes with the full national team.

This U-20 team will likely be completely different. There are no clear choice defenders at the moment but rather, the team looks strongest in the attacking and midfield positions.

In theory, Ramos could have players like Jonathan Gonzalez, Tyler Adams, Tim Weah, Josh Sargent, Jonathan Amon, Nick Taitague, Taylor Booth, and Andrew Carleton between the midfield and the attack.

But how successful this team will be on the field will come down to how well the defense and goalkeeping can grow over the next year.


This camp was also revealing in how much U.S. Soccer has been scouting dual nationals and many players will be making their first appearance for U.S. Soccer.

AIK Fotboll forward Nebiyou Perry is on the U-20 roster and has played for Sweden at the U-17 level and would need to file a one-time switch to represent the United States. There is no indication yet he has or will do so soon.

Similarly, Wake Forest’s Justin McMaster is on the U-20 roster listed as a forward but has played for Jamaica and would need to file a one-time switch.

But the biggest surprise is from the Mexican-American dual nationals. Ulysses Llanez, Michael Barragan, David Ochoa have all represented Mexico at the youth levels before.

Following this camp, it will be interesting to see if any of these players continue to remain with the United States.