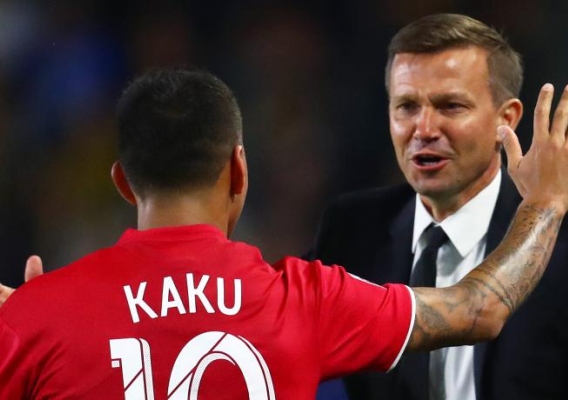 New York is definitely Red and Marsch's group definitely earned bragging rights after a thoroughly dominating performace over NYCFC. Elsewhere, Toronto is digging out of its hole, Seattle looks stuck in its hole, and how good is Orlando?
BY Brian Sciaretta Posted
May 07, 2018
3:00 PM
THE MOST ANTICIPATED game of the weekend was the Hudson River Derby between the New York area’s two teams and it was the New York Red Bulls that put on a show. Elsewhere, Toronto begins to dig out and Orlando continues to roll.

Here are my top five thoughts on the weekend


It wasn’t surprising that Tyler Adams or Bradley Wright Phillips were great for the Red Bulls in its 4-0 beat down of New York City FC. Nor was it surprising that Tim Parker and Aaron Long were good in central defense and basically shutdown NYCFC. That is to be expected from those two.

What was surprising, however, were the other players who are now making a name for themselves with the Red Bulls.

Sean Davis, 25, might be one of the most underrated midfielders in the league. Red Bull fans have always seen enough to know there was talent with the homegrown Davis but he has been playing behind Sacha Kljestan and Dax McCarty his whole career.

Now with more opportunity, Davis is beginning to come into his own. Against New York City, he worked extremely well with Adams to basically allow the Red Bulls to play the game on their terms.

Meanwhile, Florian Valot has also been instrumental in opening the game up for the Red Bulls in the attacking third. The Frenchman was lethal against New York City – and like Davis, Adams, and Long – he shows what a massively productive tool Red Bulls II has been to the success of the Red Bulls.

Finally, the addition of Alejandro “Kaku” Gamarra seems as if he will have high-level impact along the lines of what Atlanta United has enjoyed with its stars. Kaku is fun to watch and he can be dominant in a way the Red Bulls hoped Gonzalo Veron never was.

When combined with the enthusiastic Jesse Marsch as manager, the Red Bulls should contend, once again for the East.


Toronto FC was left in a huge hole after prioritizing its run in the CONCACAF Champions League. Now back in league play, it had quite the deficit. On Friday night it strolled past the Philadelphia Union for a 3-0 win. The team is still in a bad situation with just seven points in seven games (10th place) but at least it looks set to start climbing out.

Meanwhile, Philadelphia continues to be a hot mess. Of course it has a young defense, but when combined with an underperforming front six, winning games is near impossible. The big culprits so far are the experienced players of David Accam, CJ Sapong, Alejandro Bedoya, Ilsinho, and Borek Do?kal who have let the team down.


When Seattle won MLS Cup in 2016, it was hovering in last place in late July and into early August. That year, it was saved by a midseason acquisition of Nicolas Lodeiro.

Seattle has said it will spend big on a designated player this summer but it will need a similar impact because this Seattle team simply cannot score goals. On Saturday it played Columbus at home and went up a man in the 15th minute. Despite this advantage, it could not must anything en route to a 0-0 draw. Afterward Seattle heard boos from its loyal fanbase.

So far this season, Seattle just has five goals through seven games. The loss of Jordan Morris hurts and an “injured” Lodeiro completely ruins the team’s attack. Clint Dempsey is not the threat he once was and the both Cristian and Alex Rolan have created little.

The injury to Lodeiro was a particular sore point for Seattle as the speculation is that Lodeiro could probably play in these games but does not want to play hurt ahead of the World Cup – where he will represent Uruguay.

It’s bleak times for Seattle, there are lots of questions, very few answers, and frustration is beginning to mount.

Right now, everything is clicking in the midfield for Orlando and it is finding ways to make big plays. Victor Yotun has been particularly impressive, Sacha Kljestan has continued his form from the Red Bulls, Dom Dwyer is the best American forward in the league, and the wing tandem of Justin Meram and rookie Chris Mueller is one of the best in the league so far.

After a slow start, Kreis has his team playing well and Kljestan is thriving within an offense that can open the game up with speed and width.

In the six game run, however, Orlando has not beaten anyone particularly impressive. Of course a six game winning streak is hard, regardless, but none of Orlando’s wins have come across any team in the playoff positions – with the exception of the Red Bulls which fielded a second-string team due to the Champions League.

The next two weeks will give everyone a better indication of how good Orlando really is as it takes on Atlanta and Toronto.