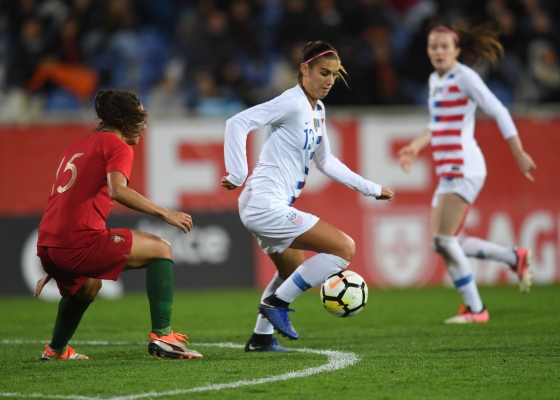 It was a brutal match to watch but the USWNT prevailed against Portugal. ASN's John Halloran breaks down the game and what to take away from it.
BY John Halloran Posted
November 09, 2018
5:00 AM
THE UNITED STATES women’s national team downed Portugal 1-0 on Thursday night in Lisbon, picking up the program’s 500th win in the process.

Jessica McDonald scored the lone goal in the contest, putting back her own rebound in the 42nd minute to secure the win.


From start to finish, the U.S. looked poor on Thursday, struggling to find any rhythm in the match. The Americans saw uncharacteristically flat performances in the midfield from Lindsey Horan and Rose Lavelle, who both gave the ball away far more than usual. On one wing, Megan Rapinoe lacked her usual flair and on the other, Mallory Pugh gave head coach Jill Ellis no reason to think she should challenge for a regular starting role.

Poor in possession and lacking any sustained combination play, the Americans also struggled to finish when they did create, as McDonald, Lavelle, and Horan all contributed bad misses on open chances directly in front of goal. The defense, overall, played a solid match, but goalkeeper Alyssa Naeher had a number of stumbles and was a bit lucky that Portugal didn’t punish her for those mistakes.

Some of this may be forgiven, as the U.S. is coming off a long stretch of games over the spring, summer, and fall, combined with the grind of the National Women’s Soccer League season. Seven weeks have gone by since the domestic season ended and three since World Cup qualifying concluded. Perhaps that gap in play caused the Americans’ rustiness, or perhaps it came as the result of head coach Jill Ellis’ semi-experimental lineup, but the end product resulted in one of the ugliest overall performances in recent memory.


When Ellis’ roster dropped a few weeks ago, several names on the roster caused surprise—and a lot of those players saw the field on Thursday.

Andi Sullivan, Jess McDonald, and North Carolina sophomore Emily Fox all started for the U.S. in the contest, creating a hodgepodge lineup. Sullivan became a short-term mainstay in the American starting XI following the 2016 Olympics, but then came a knee injury and a tumultuous rookie season in the NWSL that have limited her opportunities over the past two years with the U.S.

On the night, she performed adequately, but it’s doubtful she did enough to put herself back in the conversation for a World Cup roster spot. Ellis took Sullivan out at the half, replacing her with Danielle Colaprico—who earned her first cap for the national team.

McDonald played well in the league this season, and scored in both the semifinals and final of the NWSL playoffs to work her way back into Ellis’ consideration. With many wondering if the U.S. needs some more depth in the No. 9 position, McDonald didn’t impress. She struggled to work herself into the game and missed one gilt-edge chance in the first half before later contributing a scrappy goal right before the break. However, Ellis replaced McDonald at the half, bringing Alex Morgan into the game.

One problem with testing so many new players at once—and during an off-season contest at that—is that it’s difficult to know what exactly caused the U.S.’ poor play. Did Lavelle, Horan, and Rapinoe look bad because Sullivan, McDonald, and Fox, as part of the starting XI, couldn’t keep up with the speed of play, or the technical demands of the international game? Or, were the U.S. regulars just tired after a long season of club and international play and dragged down the performances of the newer players?

Portugal, for its part, played better than most expected, keeping pace with the U.S. in the final shot count (13 attempts for each side). Goalkeeper Patricia Morias made a number of key stops to prevent the U.S. lead from growing, and the Portuguese’s pressure on the ball seemed to unsettle the Americans through most of the game.

Next Tuesday, the U.S. will play Scotland (2 p.m. ET, FS1) in the second match of its European trip. Perhaps more answers will come then.