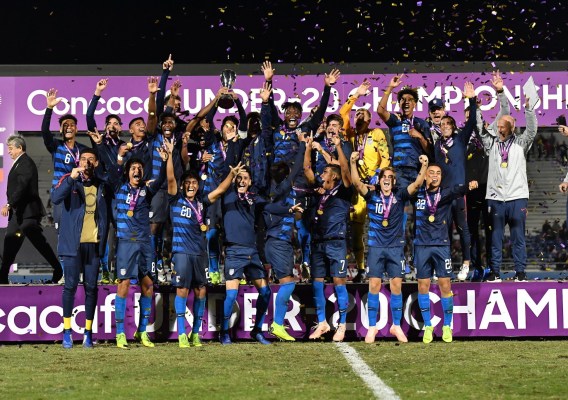 The US U-20 World Cup Squad: Youth is Served

The United States U-20 roster is out and many supporters are optimistic that the team can perform well in Poland. But ASN's Jamie Hill takes a look at what is a very young team by U-20 standards
BY Jamie Hill Posted
May 13, 2019
3:55 PM
ON FRIDAY, Tab Ramos unveiled the roster of 21 under-20 players who will represent the United States at the World Cup in Pold. Anticipation for this announcement among observers and fans of US youth national teams has been building over the last six months.

In November, the US team raised the CONCACAF U-20 title with relative ease and 2019 has seen a number of age-eligible players seize larger roles at their clubs. Competition to make the roster for the upcoming tournament was more bone-crunching than it was for any US youth team in recent memory. The 2019 team is the first US U-20 World Cup team ever to feature exactly zero players from college soccer.

But so numerous are the current ranks of American U-20 professionals that even bona fide MLS starters were cut adrift when it came time to finalize the roster. In fact, immediately following the roster announcement, non-rostered players like James Sands, Frankie Amaya, Brenden Aaronson, Christian Cappis, and Julian Araujo acquitted themselves well in club games over the weekend.

The collective club accomplishments of the U-20 squad are stronger than most, if not all, past groups, but what makes this particularly impressive is that this is one of the youngest US U-20 teams of all time — and you have to go back a long way to find anything that’s even close.

The biennial nature of the U-20 World Cup means that a squad typically comprises two birth years, with a small handful who are “playing up” a cycle. Because no U-20 player is a finished product, the older birth year is advantaged: this year, the 1999s would have an extra year of development under their belt. But despite this built-in disadvantage, the 2000s are especially strong.

There are only six players born in 1999 on Ramos’ roster, which is smallest presence of the oldest eligible birth year since the era of 18-man rosters: the 1987 team that featured Marcelo Balboa, Jeff Agoos, Tony Meola, and Kasey Keller. The last time the US sent a U-20 team to the World Cup with fewer than six players of the oldest eligible birth year, the roster included the likes of Hugo Perez, Tab Ramos, Paul Caligiuri, and George Gelnovatch in 1983.

All of this is to say: this squad is young. The team has impressed based on their club accomplishments and based on qualitative evaluations of their performances, but its youth implies that the team has even more growth potential than a typical U-20 group. It is notable that many of the players omitted from the roster who have opened eyes for their clubs or who have drawn praise from Tab Ramos are also from the 2000 and 2001 birth years: Brenden Aaronson, James Sands, Frankie Amaya, and Julian Araujo.

Meanwhile, still more 2000s missed out for varying reasons: Jaylin Lindsey was removed from contention due to long-term injury, Josh Sargent has graduated to the senior team, Jesus Ferreira is the victim of the slowly-turning wheels of bureaucracy, and Andrew Carleton has struggled through trials and tribulations in Atlanta.

Does any of this matter? The possession of youth does not guarantee future development, but it certainly leaves space for it. For some players, six months can make an enormous difference, which we’ve seen in Paxton Pomykal’s transformation from a rarely used reservist to influential maestro in the midfield for FC Dallas or in Edwin Cerrillo’s emergence from obscurity.

Meanwhile, the U.S will open the tournament with a tough game against an older, more physically mature Ukraine squad: 14 of the 25 players on their preliminary squad were born within the first three months of 1999 and only five were born in 2000 or later.

Youth development is a murky and unpredictable process on an individual basis, subject to the whims of luck or fate. However, the broader trends of the 2019 U-20 team offer hope to US soccer fans still reeling from the failure to qualify for the World Cup: the relative youth of the team only bolsters the theory that this is one of the strongest U-20 cohorts yet.