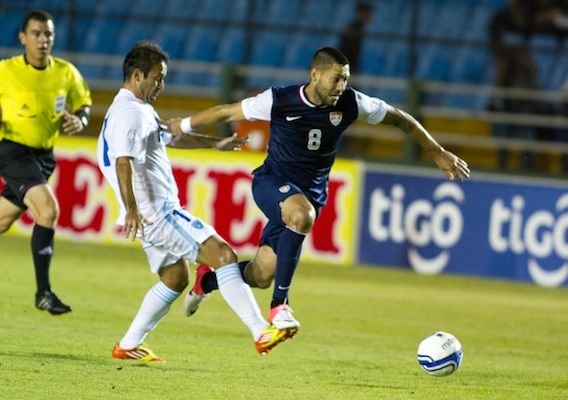 The United States Focuses on Winning in Kansas City

The Americans need a single point from their match against Guatemala on Tuesday night. But they don't plan on settling for a draw with the Chapines, Jon Arnold reports.
BY Jon Arnold Posted
October 15, 2012
5:50 PM

KANSAS CITY—Entering the final match of the third stage of World Cup qualification, the United States finds itself on the doorstep of the hexagonal.

But with a narrow victory against Antigua and Barbuda still fresh on the brain, the team plans to do everything possible to make sure it doesn’t get left in the cold.

“We weren’t really able to show our quality on a pitch like [the bumpy one in Antigua, primarily used as a cricket ground]," said Clint Dempsey. “Tomorrow we won’t have any excuses; the field’s in great shape here.

“Yeah, we’re looking to try to win the game, try to get as many points as possible, try to win the group, and make sure we get the job done tomorrow. We want to get that performance we had against Antigua out of our mind.”

A late Eddie Johnson goal saved the U.S. a draw that would’ve caused plenty of embarrassment and nerves. The 2-1 win in the Caribbean makes the situation simpler for the Yanks: Win or draw here in Kansas City, and they’re through to the hex. (They can also advance with a loss as long as Jamaica doesn't make up a three-goal differential. But let's not go there.)

“You’re in a situation where if you get the right result, you go to the next round,” Dempsey said. “We still have it in our hands to make it happen, so that’s always a good feeling.”

To beat Guatemala, the Americans will have to avoid making foolish mistakes, especially when defending in the final third. Goalkeeper Tim Howard said preventing those mistakes is a matter of keeping focus on the pitch.

“If you can drill it into peoples’ heads, they don’t do it,” he said. “I think that’s just getting lazy; not concentrating, a little bit of fatigue. It’s the easy way out of defending to give away fouls in dangerous areas.”

If coach Jurgen Klinsmann needs to remind the team about avoiding those fouls, he won’t have to dig too far. He’ll only need to pop in the game tape from June 12, the away leg of the tie with Guatemala, when Marco Pappa thumped a free kick from just outside the box into the net in the 81st minute to force a 1-1 draw.

“I think they caught us a few times down in Guatemala, one that led to the goal, but a few more that led to some chances that were dangerous,” the American goalkeeper said. “We’ve seen that. We’ve looked at that on film and we’re aware of it.”

Dempsey echoed the sentiment and said attacking players need to make sure they’re being smart when tracking back to help defend. “I think we need to be aware of giving away set pieces in our final third,” he said. “That’s something that’s hurt us in qualifying. When we’ve given teams free kicks around the box, they’ve been able to hurt us.”

But Howard pointed out it’s one thing to have something in mind before the match and another to do so on the pitch.

“We do what we can beforehand, we’ve talked about it today in our preparation, and obviously it’s going to have to happen on the field,” he said. “Guys are going to need those little reminders to make sure they’re not fouling in key areas.”

Keep its wits, and the U.S. likes its chances of not only advancing but winning the group. Still, Howard cautioned, the job won’t be complete Tuesday night or even in 2012.