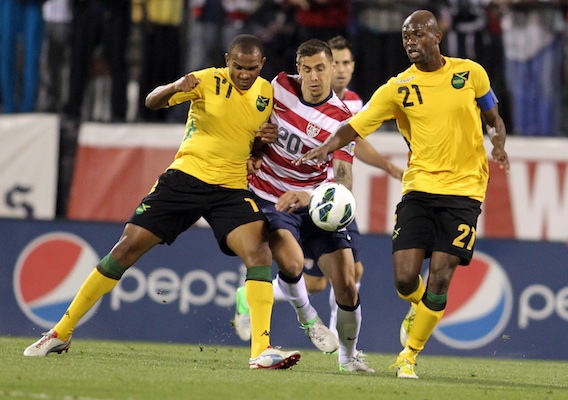 The Top 5 Threats Facing The U.S. in Jamaica

Oppositionally, tactically, and geographically, Friday’s World Cup qualifier in Kingston is a tricky match for the U.S. men’s soccer team. Daryl Grove breaks down five reasons why that is.
BY Daryl Grove Posted
June 05, 2013
1:10 PM
WHEN THE UNITED STATES men’s soccer team traveled to Kingston, Jamaica, last September, the Americans suffered a surprise 2-1 World Cup qualifying defeat—arguably the most disappointing result of the Jurgen Klinsmann era. Forewarned is forearmed, so with the U.S. once again facing the Reggae Boyz in Jamaica’s capital on Friday, here are the top five threats you need to be worried about.

Johnson is the key to Jamaica’s counterattacking style, always showing for the ball, even if it means pulling wide or deep. The Portland Timbers striker’s borderline-hyperactive movement allows Jamaica to play one up top and pack the midfield and defense, because he’ll happily connect his teammates on the counter or find space behind defenders for himself. Gonzalez and Besler will have to concentrate and communicate to keep track, or Dempsey might regret giving Johnson the Deuce Face last time out.
Main Threat: Movement

Jamaica’s home-field advantage is very real, with the Reggae Boyz’ 50-match unbeaten run in the late 1990s seeing the stadium nicknamed “The Office,” presumably because no one wants to go there. It’s going to be around 90 degrees and humid in Kingston on Friday. The pitch may fall somewhere short of perfect. And everybody should expect plenty of noisy horns from the partisan home crowd.
Main Threat: Not-so-casual Friday at The Office.

The Leeds United midfielder is a triple threat. He brings serious muscle to Jamaica’s five-man midfield and won’t be happy until he’s hustled Jermaine Jones and Michael Bradley off the ball a few times; he loves a quarterback-style long-range pass; and, most memorably, never saw a low right-footed shooting opportunity that he didn’t like. Just ask Kyle Beckerman and Tim Howard.
Main Threat: Low, long-range shots.

Herr Head Coach is riding high after that 4-3 win over the Fatherland on Sunday, but let’s hope he doesn’t get carried away in Kingston. A commitment to pressing and trying to thread passes through a penalty area full of determined Jamaicans didn’t work last September and won’t work this week. The U.S. could suffer if Klinsmann once again refuses to sacrifice aesthetics in order to smash and grab the points.
Main Threat: Strategic Stubbornness

A recent addition to Jamaica’s attacking arsenal, the English-born McCleary is a fast, strong, 6-foot-tall winger who likes to dribble inside and shoot. He has done so successfully for Nottingham Forest and Reading, scoring three goals in the English Premier League last year. We’ve seen the U.S. defense struggle with this kind of direct dribbling threat in the last two games. And yes, that is how you spell his first name.
Main Threat: Pace