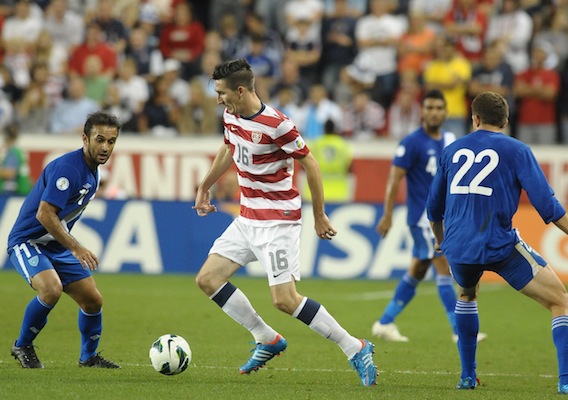 The Tactics of Victory: Why the USMNT Won

The strange nature of final group games was exposed once again on Tuesday, as Guatemala’s tendencies in its 3-1 loss to the United States fluctuated with the score of the concurrent Jamaica vs. Antigua & Barbuda game. After a strong start, the Chapines wavered and allowed the Americans to dictate the game.

Guatemala started with Carlos Ruiz as a lone striker, and he remained the highest man even after Mario Rodriguez moved from left midfield to a shadow striker role. Wilfred Velasquez played the holding midfield role, although he couldn’t stop Clint Dempsey from terrorizing the Guatemalan back line, which got caught ball-watching on all three American goals.

The United States played with Herculez Gomez as the highest man, with Dempsey playing a little too far underneath him to be called a second striker. On either side of Dempsey, Eddie Johnson drifted to the inside—his natural tendency as a forward—while Graham Zusi stayed fairly wide. Danny Williams and Michael Bradley swept up behind them, with Williams holding a bit deeper and playing a more disruptive role, while Bradley advanced and took on the position of playmaker.

Guatemala’s gut-punch of an opening goal showed once again that the weakest point of the American team is the back line. Take another look at ESPN’s halftime graphic of the goal (names and red line connecting the U.S. defense added).

Steve Cherundolo is stepping to mark an outside option, which should be fine because it leaves Michael Parkhurst, Carlos Bocanegra, and Geoff Cameron all to deal with Ruiz.

Because of the poor American shape in the back, one ball beats all four defenders and leaves Ruiz one-on-one with Tim Howard.

When Guatemala attacked later in the game—between Antigua’s only goal of their game and Dane Richards’ double response—it basically had three runners going forward. As the ball made its way to a wide man, the weak-side midfielder made a run alongside the forwards.

With poor service, it doesn’t make much of a difference, and the majority of the outside midfielders’ crosses were below average. Aside from Howard’s near gift, Guatemala didn’t create too much from the outside.

In fact, Ruiz running high by himself caused more trouble than these two- or three-man attacks.

From his deep-lying position under Gomez, Dempsey picked apart the Guatemalan defense with his sharp runs. Ruben Morales, then Jonathan Lopez were the primary victims. The Tottenham talent ran across their line of sight and then floated (or “ghosted”) to their back shoulder.

Dempsey’s goals were both the result of getting to the back shoulder of a defender and tapping in driven crosses on the ground. His assist came at the near post after a darting run across an unaware defender.

Liviu Bird is an assistant editor at Prost Amerika and a contributor to the New York Times Goal Blog. Follow him on Twitter at @LiviuBird.