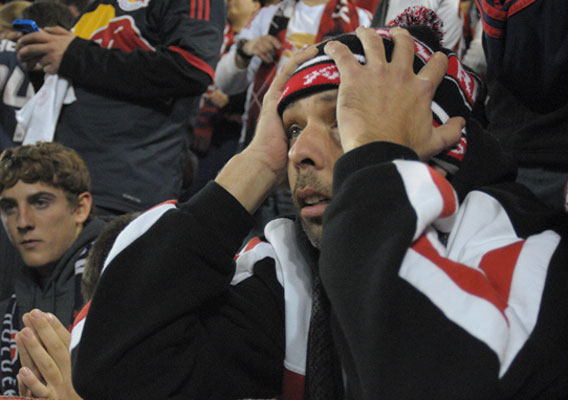 The Joy and the Misery of the New York Red Bulls

ASN sent photographer Mike Lawrence to Harrison, N.J., to cover the New York Red Bulls' push for both the Supporters' Shield and postseason relevance. He captured the extreme highs, and the devastating lows.
ASN Slideshow

BY John Godfrey and Mike Lawrence Posted
November 07, 2013
10:02 AM
THE NEW YORK RED BULLS defeated the Chicago Fire, 5-2, on the last day of the regular season, securing Major League Soccer's Supporter's Shield for the first time in the club's beleaguered history. Unbridled joy reverberated throughout Red Bull Arena—in the stands and on the pitch—and there was a strong sense that this team, finally, after so many years of frustration and disappointment and futility, would make good on its promise and push for the MLS Cup. Photographer Mike Lawrence captured the positive vibe and jubilant post-game celebrations that night, and you can see these images by clicking on the ASN Slideshow icon above right. On Wednesday, the Red Bulls crashed out of the MLS Playoffs yet again, losing at home, 2-1, against a gritty Houston Dynamo team that scratched and clawed and fought its way past New York despite falling behind twice in the home-and-away series. The mood around the stadium after last night's match? You be the judge. Lawrence's photos below capture the feelings surrounding this seemingly cursed club better than any words can.

So, what do you think? Are the New York Red Bulls cursed? Is this the most disappointing incarnation of the team in its 17-year history? Share your thoughts below.