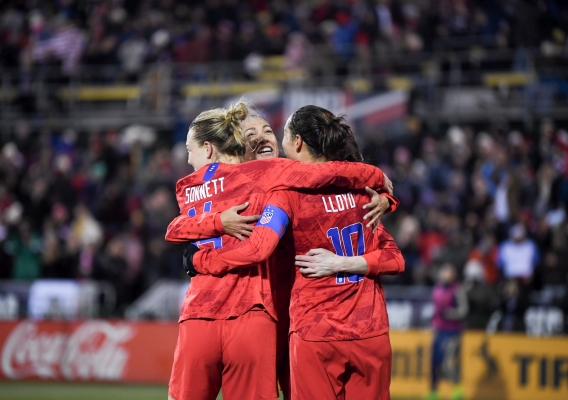 In its first game under Vlatko Andonovski, the USWNT posted a 3-2 win over Sweden behind two goals from Carli Lloyd and one from Christen Press. ASN's John Halloran is here with a report
BY John Halloran Posted
November 08, 2019
1:00 PM
IN ITS first match under new head coach Vlatko Andonovski, the United States women’s national team defeated Sweden 3-2 on Thursday night in Columbus, Ohio.

In front of 20,903 fans, the Americans got off to a quick start in the contest, scoring three times in the first half with Carli Lloyd netting twice and Christen Press adding a third. And although the Swedes did come back to nab two themselves in the second stanza, the U.S. held on for the win.

ANDONOVSKI ERA BEGINS WITH A WIN


New head coach Vlatko Andonoski took charge of the Americans for the first time against Sweden and things couldn’t have gotten off to a better start with the U.S. getting off to a 3-0 lead against the No. 5 team in the world in only 30 minutes of play.

There weren’t any massive adjustments from the system that former head coach Jill Ellis built over the past five years, but the team did seem to be playing a bit deeper than normal and clearly transitioned into a 4-1-4-1 when not in possession.

Many also noticed the play of winger Tobin Heath on the night, who won a header in the middle of the pitch to start play on the U.S.’ second goal and then won another header to put Lloyd in for the U.S.’ third goal. Heath, not normally known for her defensive prowess, also worked back hard in defense. How much Andonovski inspired the effort—as players work to impress their new coach—is still a question to be asked.


LLOYD PUSHING HARD FOR THE OLYMPICS


Lloyd had herself quite the night on Thursday, finishing the match with two goals and an assist. The first tally was a simple finish—the kind often required of a team’s No. 9 in this type of system—but the second was a jaw-dropping chip.


Once @CarliLloyd gets hot, it's impossible to stop her.

Lloyd played largely as a backup in the 2019 World Cup, and told American Soccer Now last month that she doesn’t believe that Ellis gave her a fair shot at winning a starting spot on the team.

That claim aside, Lloyd has proven this year that she can still play an invaluable role for the U.S., and possibly start in the 2020 Olympics—especially with Alex Morgan pregnant and out for the time being.

Not only did Lloyd score eight times in only 14 matches in the National Women’s Soccer League this past season, but she currently leads the U.S.’ in scoring in 2019 with 15 goals this year. Lloyd may not often say the “right” things in the “right” way, but she’s clearly the best option the Americans have in the No. 9 position right now, only eight months ahead of the Olympic Games.


Rose Lavelle was a tour de force on Thursday night, dicing up the Swedish midfield over and over again. Her ability to break lines—not just with passes, but on her own on the dribble—created at least five dangerous attacking sequences in just 60 minutes of play.

Lavelle didn’t end up on the scoresheet in Columbus, but her ability to work the ball out of tight spaces deeper on the field helped the Americans’ transition play and also cleared up space for her teammates as she dragged Sweden’s defense out of shape on repeated occasions. To put it simply, the U.S. is simply at another level when Lavelle is at her best.