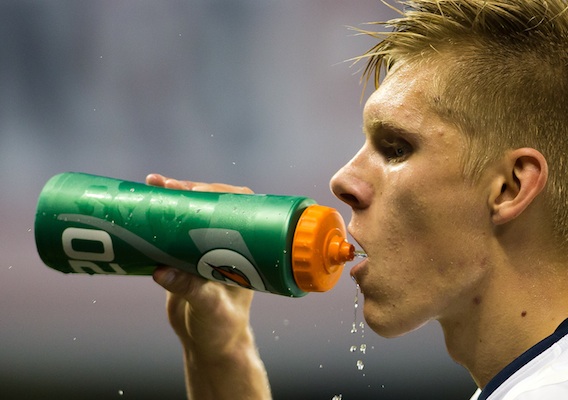 From Jordan Seabrook to Duane Holmes to Aron Johannsson, American Soccer Now's Brian Sciaretta keeps tabs on Americans overseas, and shares the best performances with you every Monday.
BY Brian Sciaretta Posted
October 21, 2013
11:42 AM
GIVEN THE MANY INJURIES to Americans playing overseas, as well as clubs' decisions to let U.S. national team players recuperate from World Cup qualifying, you have to look far and wide to find 10 noteworthy performances from Europe-based Yanks. But that's exactly what we do here at American Soccer Now. So have at it—the 10 best weekend performances from Americans abroad.

If you go to Jordan Seabrook's Twitter page, his bio line reads, "I play soccer because having a real job sucks." Well, his soccer job is working out quite well for his club, VPS, which clinched third place in Finland's top flight, the Veikkausliiga. Seabrook has been a key contributor for VPS in the midfield where he has played in all 32 games this season, scoring seven times. On Sunday, Seabrook started and went 81 in a 3-0 win over Jaro to clinch third place and a spot in next year's Europa League qualifying rounds.

Bodo/Glimt are heading up to the Norwegian top flight, the Tippeligaen. The club has been dominant this year and secured promotion before the international break. Zarek Valentin has been with the club on loan, and he has been a stalwart at right back. On Sunday, Valentin went the distance yet again in a 2-0 win over Kristiansund and was solid in defense to help the club earn a clean sheet. This is nothing new for former Montreal Impact defender Valentin and Bodo/Glimt which has allowed just 23 goals through 28 games this year.

After earning promotion just last year, Viborg continue to impress in the Superliga thanks to a strong defense anchored by American Jide Ogunbiyi. The Rochester native went another full 90 for the club on Sunday en route to a 0-0 draw on the road against Brondby. With the point, Viborg remain in fourth place in the Superliga—a great position for a small-but-ambitious club.

The Georgia native came on in the 61st minute to help Huddersfield Town come back from a 2-0 deficit to promotional contenders Leicester City. In the end, the Terriers came up on the short end of a 2-1 result but Holmes impressed yet again and looks poised to start next week against Leeds United.

Bolton's season began poorly and the club currently sits just outside the relegation zone in the Championship, but signs of life are starting to surface within the club thanks to an improved defense. Part of that is due to strong play of Tim Ream, who has nailed down a starting spot. On Saturday, the former New York Red Bull went the full 90 in a 1-1 draw against Sheffield Wednesday and was Bolton's best player again. It's getting repetitive—he has been one of the team's best players for the last few months. The pressure will remain on Ream as Bolton will likely be in a battle for survival all season.

It has been a difficult year for Packwood. The 20-year-old Massachusetts native broke his leg in gruesome fashion in January just as he earned a spot in Birmingham City's starting lineup. As a result, he missed the rest of the season as well as the 2013 U-20 World Cup. Now on a one-month loan to League Two's Bristol Rovers, Packwood played his first competitive minutes since the injury and earned Man of the Match honors despite a 1-0 loss to Wycombe Wanderers. No doubt, the strong showing will put him in good standing with Birmingham City when he returns in November.

After spending the past two weeks with the U.S. national team, Boyd started the game on the bench for Rapid Vienna against Sturm Graz. He came on in the second half with Rapid trailing 2-0 and scored the equalizer from a penalty for his seventh goal in all competitions for Rapid.

Nuremberg are a team in turmoil, caught in a relegation fight and currently being run by interim head coach Roger Prinzen. Every point is crucial and on Saturday Nurnberg fought to a 1-1 draw with Eintracht Frankfurt. It was an important game for Nuremberg to earn a result after dropping a 5-0 result to HSV at home right before the international break. Timothy Chandler went a full 90 again for FCN and played well at right back. He has quietly resumed his role as one of the team's better players. Chandler is an enigma to U.S. fans but as he continues to play better in the Bundesliga, he could resurface on the U.S. national team.

It bears repeating that Bedoya decision to sign with FC Nantes has been one of the best moves an American player has made in a long time. He was not in the national team picture earlier this year, now he's arguably a starter for Klinsmann while playing a big role for a Ligue 1 team that is off to a terrific start. Bedoya did not start for Nantes on Saturday against Ajaccio, but that was to be expected after featuring in two games for the U.S. during the international window. He came into the game in the 81st minute and was the difference, scoring the game-winning goal in the 87th minute. (As an added bonus for U.S. supporters, Bedoya's goal came against Mexican goalkeeper Guillermo Ochoa.)
AZ Cam Johannsson by goalsandmore

Just days after scoring his first goal for the United States, Aron Johannsson put on an incredible show in AZ Alkmaar's 3-1 win over Cambuur. After AZ fell behind 1-0, Johannsson assisted on the equalizer then scored AZ's final two goals. All three plays were sublime, requiring first-rate technique and skill to execute. His second goal in particular was highlight-reel quality—he faked his defender out of the play and finished with a lethal shot to the top corner.
AZ Cam Johannsson2 by goalsandmoreIt's amazing to think that just two months ago, he wasn't even on the books as a U.S. player. Now, he's one of national team's fastest rising players. Brian Sciaretta is an American Soccer Now columnist and an ASN 100 panelist. Follow him on Twitter.