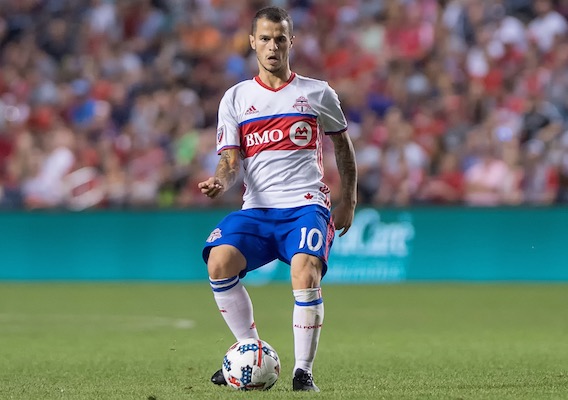 The New York Red Bulls host New York City FC. Toronto FC faces the Montreal Impact. The Seattle Sounders vs. the Portland Timbers. It's shaping up to be a special weekend for Major League Soccer fans.
BY Franco Panizo Posted
August 25, 2017
6:00 AM

WINS ARE PILING UP, contributions are coming from all over the field, and another piece of hardware is in sight.

Life is good for Toronto FC and its fans right now.

A busy midweek slate saw Toronto move a step closer to claiming the Supporters’ Shield, as the Canadian club trounced the Philadelphia Union 3-0 at BMO Field. Star forwards Sebastian Giovinco and Jozy Altidore each found the back of the net and surefire MLS Newcomer of the Year candidate Victor Vazquez also contributed with two pinpoint assists while Nicolas Hasler got on the scoresheet with a fantastic looping header.

Giovinco does it again as @TorontoFC takes the 1-0 lead. #TORvPHI https://t.co/N48YyQBSRx

The victory moved league-leading Toronto FC seven points clear of the rest of the pack, kept it undefeated at home through 13 matches, and extended its current unbeaten run to eight games. The club will now attempt to build on all those figures this Sunday, when it visits the surging Montreal Impact in one of the marquee fixtures of "Rivalry Week."

Thanks in part to some incredible individual performances from Ignacio Piatti, things are looking up for Montreal in recent weeks. The Impact have won four straight and are now above the playoff line in the Eastern Conference. Still, only one point separates them from Atlanta United, so coming out on top on in this installment of the 401 Derby is imperative for Montreal.

Slowing down red-hot Toronto FC will be no easy feat, but the Impact might be able to accomplish that goal if Piatti continues to light it up. Piatti scored four times in two games last week to continue his personal tear, and the reigning MLS Player of the Week will have to be on from the start in order for Montreal to have any shot at avoiding becoming Toronto’s latest victim.

Though it still faves an uphill battle, Real Salt Lake has given itself a chance of reaching the playoffs.

Salt Lake’s recent good run of form continued with a 4-0 dismantling of the San Jose Earthquakes on Wednesday, and now only three points separate Mike Petke’s side from jumping back into the playoff picture. It is true that RSL has played more matches than most of the rest of the Western Conference, but games in hand do not necessarily mean points in hand.

The good news for RSL is that its opponent on Saturday is one of the league’s favorite punching bags: the Colorado Rapids. Colorado remains winless on the road in 2017 and has not triumphed in seven straight games, so Real Salt Lake should be feeling plenty good about its chances of taking this Rocky Mountain Cup clash—doubly so if attacker Albert Rusnak can replicate the type of outing he had vs. San Jose.

BATTLE IN THE BIG APPLE

The New York Red Bulls have dominated New York City FC more often than not in the brief history of their intense rivalry. Not this year, however.

The sensational David Villa will once again lead the way for NYCFC but you can expect Red Bulls head coach Jesse Marsch to try and devise a new plan to try and slow down the Spanish striker. After all, Villa scored a hat trick the last time these two sides locked horns back on Aug. 6.

Atlanta United suffered a third loss to lowly D.C. United on Wednesday, and needs to bounce back in a big way on Saturday when it visits the Philadelphia Union. In order to do that, Miguel Almiron, Josef Martinez, and the rest of Atlanta’s front line will need to be sharper than they have been in recent outings. The club has netted just twice in its last three games, and that output simply will not cut it if Atlanta is to make the playoffs in Year 1.

WHAT ELSE TO WATCH FOR

If rivalry matches are your cup of tea, then clear your schedule and tune into MLS’s Sunday programming.

In addition to the Montreal-Toronto affair, a California Clasico bout between the struggling LA Galaxy and the Earthquakes is in store, and games between these two outfits tend to be wild regardless of who is available or what is at stake.

A meeting between Cascadia foes the Seattle Sounders and Portland Timbers will follow to cap the weekend action, and it will certainly be worth watching given that it is a matchup of the first- and second-place teams in the Western Conference. Both teams will be facing a quick turnaround after playing on Wednesday but Seattle is the side in better form given that it is on an undefeated run of 10 games.

That said, Portland will stand a good chance of putting an end to that streak if Diego Valeri scores for the sixth straight match or if Darlington Nagbe comes up with more impressive moments like the one he had vs. Colorado.