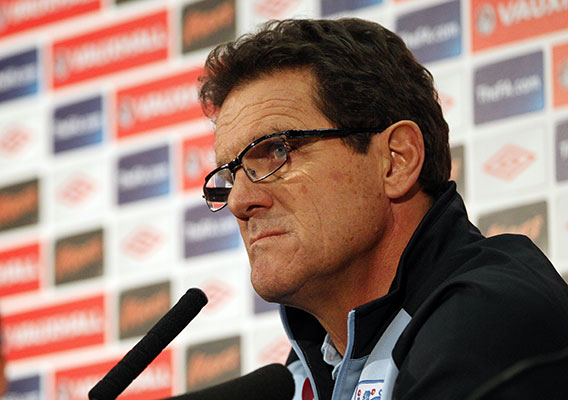 Fabio Capello’s Russia squad for the friendly against the U.S. is almost entirely first-choice players. It will be a tough task for the Americans to break them down.
BY Liviu Bird Posted
November 12, 2012
5:54 AM

When the United States plays Russia in Krasnodar (Wednesday at 10 a.m. ET/ESPN2), Jurgen Klinsmann’s team can expect an opponent that doesn’t tend to give up goals. Russia has given up more than one goal just three times since the start of the 2009 calendar year: in a 3-2 loss against Argentina on Aug. 12, 2009; in a 3-2 win at Ireland on Oct. 8, 2010; and in a 2-0 loss against Belgium on Nov. 17, 2010. In 2014 World Cup qualifiers, Fabio Capello’s men have a 4-0 record, scoring eight goals (four against Israel) and not conceding yet. Capello has been in charge only since July, and he called in a strong squad for the friendly against the United States. This is another chance for the group to gel under his guidance, so he will likely put out his strongest side in Krasnodar. Russia plays a fluid 4-2-3-1 that — as expected, with its defensive record — emphasizes defensive responsibility before attacking power. The team defeated Portugal and Azerbaijan by identical 1-0 scores in its most recent qualifiers. Defense First
Russia has one of the stoutest defenses in the world. The formation becomes more of a 4-3-2-1, as the wide attacking players — Aleksandr Kokorin and Vladimir Bystrov — will drop to support the defensive midfielders in the middle of the field (see the red lines on the graphic above for defensive tendencies; the green lines are attacking movements). Any time the opponent controls play, 10 red shirts drop behind the ball.

Red lines on the above graphic connect players with their respective lines in the initial formation, depicted in the top graphic. Russia is conditioned to protect the middle of the field on defense. All midfielders will collapse almost on top of the back line, reminiscent of the way Antigua & Barbuda defended the U.S. in recent qualifying games. Like Antigua, Russia looks susceptible on crossed balls and set pieces, although not to the extent of the Caribbean team. When opposing attacking players receive the ball with their back to goal, Russian defenders get on the opponents' backs to deny turns. Center backs Sergei Ignashevich and Vasili Berezutski are not shy about stepping into the soft spot between them and defensive midfielders to do so, which could leave them susceptible to quick one-two combinations and through balls. All 11 men drop back to defend on corner kicks, making it crowded and difficult to get a clear look in the penalty area. Goalkeeper Igor Akinfeev anchors the team. The 26-year-old CSKA Moscow phenom with 57 caps is one of the best goalkeepers in the world, and he would be at home on any top UEFA Champions League team.
Quick Transitions Teams with such a heavy emphasis on defense are often counter-attacking masters. Russia is no different, as its transition between defense and attack is quick, and it wastes little time getting the ball forward. Despite being somewhat packed in, Russia doesn’t hit long balls out of the back very often. With just one forward, normally Aleksandr Kerzhakov, it would be useless to ask him to chase down clearance after clearance. A typical attacking pattern moves from a defensive midfielder to a wide midfielder, back inside to a central player and finally through to a wide player for a cross or Kerzhakov. Typically, the through ball will go to Kerzhakov; Russia lives and dies by the ball that splits two defenders and allows him to run at goal. Russia’s goal against Portugal, in the sixth minute of the qualifier, came on a through ball from central midfielder Roman Shirokov, Russia’s main playmaker, to Kerzhakov. He split the Portuguese center backs with his run, and Shirokov did the same with the pass. Kerzhakov gets supporting runs from Kokorin and Bystrov, who do the most running in the Russian system of play. Outside backs Dmitri Kombarov and Aleksandr Anyukov don’t do much overlapping, with Capello perhaps preferring they stay focused on their defensive responsibilities. Viktor Fayzulin will advance from his defensive midfield slot, coming between Kokorin and Shirokov to give Russia a 4-1-4-1 look in the attack. The other defensive midfielder, captain Igor Denisov, plays more of a holding role. Shirokov and Kerzhakov are the main attacking threats, drifting from side to side to find the ball at their feet in the build-up, to the point that others force unnecessary passes to them at times. Russia doesn’t attack with huge numbers — usually three to five — but its players are quick with the ball and give defenses trouble with their incisive passing. Penetrating passes go wide, centrally or diagonally, and even though Kerzhakov often looks like a lonely island of a forward, his team creates multiple dangerous chances every match.