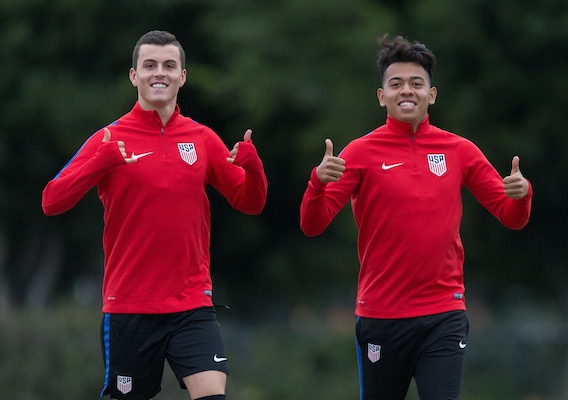 Next week the U.S. under-20 men's team will seek to qualify for the 2017 World Cup in South Korea, and today coach Tab Ramos named the 20 players who will be pushing to earn a spot.
BY Brian Sciaretta Posted
February 09, 2017
12:50 PM

UNITED STATES U-20 national team coach Tab Ramos announced his roster for the World Cup qualifying tournament today—the squad that will compete February 17-March 5 in Costa Rica with an eye on qualifying for South Korea in May. The team consists primarily of players who participated regularly throughout the cycle. How the team will lineup, however, is another matter.

As in previous cycles, Ramos stressed the importance of versatility.

“Inevitably you always end up leaving a couple guys out who deserve to be on the roster,” Ramos said. “When selecting a roster for a tournament like this, where you are trying to qualify to the world cup, you are putting together a best 11 and then players who can play multiple positions. So that’s what we've done.

"We are happy with the team and we are looking forward to qualifying.”

The United States will open against Panama on February 18, then take on Haiti February 21 followed St. Kitts and Nevis on February 24. Here's the roster.

Left back is question mark

One of the most noticeable aspects of the roster is that Ramos did not take a natural left back. Marcello Borges is injured and Hugo Arellano and John Nelson both were cut. The decision to cut Arellano in particular was one of the more surprising decisions from the final camp.

Ramos preaches versatility and it will be required for players to step out of their comfort zone to play left back. Auston Trusty, Danny Acosta, Jeremiah Gutjajr, and Aaron Herrara can all conceivable play there. My guess, however, is that the job goes to Auston Trusty, the Philadelphia Union homegrown signing who typically plays in central defense.

Either way, it is a curious decision from Ramos and it will be interesting to see how it plays out.

Sporting Kansas City central defender Erik Palmer-Brown was named captain of team—a smart decision. Palmer-Brown is the only athlete on the squad who played in the 2015 U-20 World Cup and he has experience in MLS and in Europe where he helped Porto B win the Portuguese Segunda last year.

Palmer-Brown is a top player but there is a chance he could feature in defensive midfield where he has played a few times (in addition to central defense) in the two most recent camps. Palmer-Brown has never played the position at the club level but Ramos seems impressed with how his skillset translates further up the field.

How will the attacking four line up?

Ramos will likely use a 4-2-3-1 or another variation of the 4-3-3 as the team’s formation, with a playmaker, a central forward, and two wingers.

Jeremy Ebobisse is the top choice to start at center forward—the Maryland native has been the team’s leading scorer throughout the cycle. His impressive goal-scoring numbers for the U-20 team were a major factor in why the Portland Timbers selected him with the fourth overall pick in the 2017 MLS SuperDraft.

The traditional No. 10 position will fall to either Sebastian Saucedo or Luca de la Torre. Saucedo has the ability to play both on the wings or centrally in an attacking position. He is a lock starter who has played in a majority of camps and is a huge engine for the offense. If Ramos elects to go with Saucedo on the wing, then the No. 10 will likely fall to Luca de la Torre—the Fulham youth product who was a regular with the team early in the cycle.

Tyler Adams: Adams, 17, is one of two athletes playing up a cycle with the U-20 team. Adams, a central midfielder, has surged his way onto the team the past two months playing outstanding soccer in the process. He is one of the fastest rising players on the team and is now likely to be an impact player.

Sebastian Saucedo: The Real Salt Lake player is arguably the most technically astute player on the roster and is a creative playmaker. Much of the U.S. attack will flow through him.

Jeremy Ebobisse: The team’s leading scorer has put up outstanding goal scoring numbers for the U-20 team this cycle. He is the one player the United States can ill-afford to have a bad tournament, and if he is on top of his game the Yanks could qualify easily.

Luca de la Torre: One of just three European-based players on the team, de la Torre played on the 2015 U-17 World Cup team and is a veteran of the U.S. youth national program. He has not spent a lot of time with the team this cycle but is generally a solid attacking midfield option.

Eryk Williamson: The University of Maryland product has been trying to whether to start his professional career with D.C. United which owns his homegrown rights, or abroad. He is still in college but a successful tournament could open doors for him—or drive up his value with D.C. Throughout the cycle Ramos has shown that he really likes what Williamson brings to the team both on the field and off. The coach even allowed Williamson to wear the armband at times. The box-to-box midfielder is also solid in the attack and it is a safe bet he sees plenty of minutes in Costa Rica.