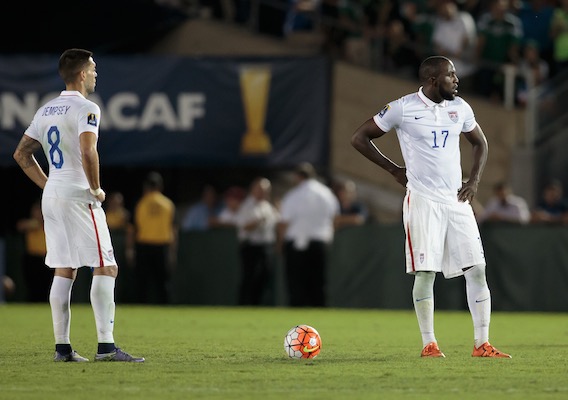 Bobby Wood, Clint Dempsey, Jozy Altidore, and Jordan Morris all have asterisks next to their names as the United States men's national team gathers ahead of two crucial World Cup qualifers.
BY Brian Sciaretta Posted
May 29, 2017
7:55 PM

Arena acknolwedged that he is still new to this process and is particularly satisfied that 21 of the players on this team have been in camp with him so far in 2017. The new national team boss also pointed out that a sizable roster was necessary because with the Trinidad & Tobago and Mexico qualifiers coming just three days apart, there will be “a number of changes” in the Starting XI for

Several notable omissions warrant attention. Sacha Kljestan, Eric Lichaj, Danny Williams, Benny Feilhaber, Walker Zimmerman, Juan Agudelo, Alfredo Morales, and Gyasi Zardes are just a few of the players who did not get the call. None of the omissions, however, seem to rise to the level of being a true snub since they are all fringe players.

Here are my thoughts on the roster as camp opens.

How will the Europeans adapt to Arena?

While most of the 27 players called in have played under Arena in 2017, six have yet to do so: Timothy Chandler, Fabian Johnson, DeAndre Yedlin, Bobby Wood, Brad Guzan, and Ethan Horvath. Guzan made his international debut under Arena in February, 2006 during the run-up to the World Cup. Similarly, Arena coached against Yedlin many times when he was the coach of the LA Galaxy and Yedlin was with the Seattle Sounders.

But Chandler, Johnson, Yedlin, and Wood are the most important here because all four are in contention to be a starters. In particular, Chandler and Yedlin are both candidates to claim the starting right back position.

So far many of the foreign-based players have adjusted well to Arena. Christian Pulisic performed well in the March qualifiers and John Brooks was strong in the game against Honduras (before being forced out of the game due to dehydration).

“I think we have a good group, and in my case I’m still in the early goings with this team and I haven’t seen all of our players," Arena said. "This camp gives me the opportunity to see six new faces we haven’t had in with the team yet—Brad Guzan, Timmy Chandler, Fabian Johnson, Ethan Horvath, Bobby Wood and DeAndre Yedlin—which is good. It’s also great that we’re able to bring back 21 players that have been in with our program already in 2017.

"There’s some continuity there as well as the fact that we’re getting to see some new faces, which is important.”

If Arena can get the team playing up to the sum of its parts, it will be fine in World Cup qualifying and beyond.

Important camp for Acosta and McCarty

If there is one player who has the biggest opportunity in this camp it is Kellyn Acosta. The talented FC Dallas central midfielder has had a very strong start to 2017 and while Jurgen Klinsmann gave him a look, the former U.S. boss utilized him out of position at left back.

Acosta, 21, has been in camp under Arena before but without Jermaine Jones and Sebastian Lletget he could push to be to be a first-choice starter heading toward the World Cup.

Similarly, McCarty also has an opening at this camp. Wherever he has played during the past several seasons, he has been part of a winning effort.

McCarty, it's worth noting, plays the central midfield position very differently than Jermaine Jones. Jones demands a great deal of freedom to roam and can often make it hard for the team to maintain its shape, McCarty is far more disciplined to play in a defined role.

Alejandro Bedoya and Darlington Nagbe play centrally for their clubs but Arena will probably utilize both as outside midfielders with the national team. That leaves Michael Bradley, Acosta, and McCarty to play the central roles.

All three should get a lot of time.

One of the more noticeable surprises on the team was the inclusion of Matt Hedges. Despite winning MLS Defender of the Year in 2016, his only U.S. cap came as a cameo at the end of a 2015 January camp friendly when he played out of position at right back.

This will be the first serious international look Hedges has ever received and it will be up to him to take advantage. If it does, it will be a big gain for the national team. Hedges has proven his quality and when he was given the FC Dallas captaincy at age 23 by Oscar Pareja, it was a testament to his leadership skills as well.

“Matt has arguably been one of the best defenders in Major League Soccer over the last couple of years,” Arena said. “It was unfortunate that he suffered an injury in January Camp and wasn’t able to play in the friendlies against Serbia and Jamaica, but we’ve continued to follow him. He was a consideration for the camp in March, but we decided to go with a couple of defenders that have had a little bit more experience with us. We can’t ignore the fact that Matt’s been a good player and he needs an opportunity with the National Team. Bringing him in is a plus, it’ll get him a foot in the door and hopefully allow him to move forward with a bigger role in the U.S. team.”

Hedges was called in over FC Dallas teammate Walker Zimmerman—who also has had a great 2017 and appeared to overtake Hedges on Arena’s depth chart. This point is now moot after Zimmerman left Sunday’s FC Dallas game with an injury but the initial roster was revealing. Of course, if Arena called Hedges, Zimmerman, and Acosta to the U.S. squad it would crush FC Dallas—that might have been a consideration.

All eyes will be on the forward position as camp opens. Arena called in four forwards: Bobby Wood, Clint Dempsey, Jozy Altidore, and Jordan Morris. Uncertainties abound with this quartet.

Wood showed his class this season for Hamburg but he struggled down the stretch, and an injury didn't help. Dempsey had a great run in the March qualifiers but with two big qualifiers in the span of four days, it's hard to see him starting both given his age and his recent health issues. Meanwhile, Morris has not replicated the top form he had last fall when he helped lift Seattle to a title. It’s too early to call it a sophomore slump but with just two goals in 1,085 minutes this season, it's fair to say he is not in top form.

Altidore will have to impose himself at this camp because the team really needs him. Poor penalty-taking aside, Altidore has been playing fairly well this season for Toronto FC (six goals in 1,036 minutes) but he will have to step it up and perform like a first-choice striker.

Who do you think should start against Venezuela, and in the two qualifiers? Create your Starting XI here and share your thoughts below.