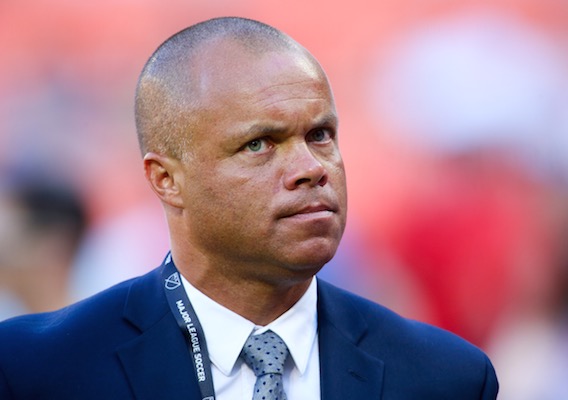 In a wave of news on Wednesday, the United States national team might be close to having Earnie Stewart as its new GM, Jermaine Jones now has a youth coaching gig, Tyler Adams is healthy, and Kenny Saief is now at Anderlecht on fulltime basis. ASN's Brian Sciaretta reports
BY Brian Sciaretta Posted
May 23, 2018
3:30 PM
THERE WAS A FLURRY of news on Wednesday to report in the world of American soccer including injury updates on Tyler Adams, progress in the national team general manager search, and Kenny Saief formally joining Anderlecht.

Adams back to training with Red Bulls


There was a lot of concern among both Red Bulls (New York, Salzburg, and Leipzig) supporters and U.S. national team supporters when Tyler Adams was subbed out of Sunday’s 3-1 win over Atlanta united with a knee injury.

But Tuesday brought news that Adams is okay and back to training with the Red Bulls.

“Tyler was out training today,” Red Bulls manager Jesse Marsch said. “We took it a little bit lighter with him just to work him into training the right way but he'll be full go tomorrow and he'll be ready for the weekend."

“Everything was fine,” he added when asked the results of scans on Adams’ knee.


United States national team left midfielder Kenny Saief formally joined Anderlecht where he had played on loan from Gent starting in January. On Wednesday, Anderlecht announced that it had exercised the option to buy that was placed on Saief’s loan.

Saief had been a regular since joining Anderlecht on loan – playing in 17 games, scoring once and adding three assists during his time there. The loan reunited Saief with head coach Hein Vanhaezebrouck who previously coached him at Gent where they reached the Champions League.


On Wednesday, the Real SoCal soccer club announced that former U.S international Jermaine Jones had joined the club to coach the U-19 boys academy team.


Real So Cal is proud to announce @Jermainejunior as our U19 Boys Academy head coach! Welcome Jermaine! pic.twitter.com/NwhxpzAjH3

Stewart closing in on GM job?


Long been considered the front runner for the new U.S. national team general manager position, Earnie Stewart is reportedly in final negotiations for the job according to Yahoo Sports and first reported by Metro New York.


Via @ByDougMcIntyre: The #USMNT is in negotiations to hire its first general manager, and Earnie Stewart seems to be the choice https://t.co/XDfanTiu66

Born in Holland, Stewart earned 101 caps for the U.S. national team as a player and featured at the 1994, 1998, and 2002 World Cups. Since retiring he served in the front offices at NAC Breda, AZ Alkmaar, and most recently the Philadelphia Union.

The details of the GM position were originally outlined as hiring/firiing the head coach, working with the coach to establish a team culture, and monitoring the depth chart. There was little having to do with youth development or managing the youth teams. It is unclear if that job will expand during negotiations with Stewart.