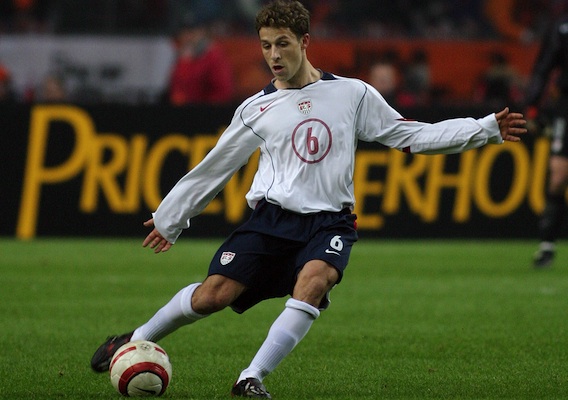 In this week's Hot or Not?, Josh Deaver is pleased to report good news from the Netherlands and Mexico. But a worrisome item from Germany may signal the beginning of the end for a U.S. stalwart.
BY Josh Deaver Posted
January 24, 2014
10:22 AM

The Ice Man remains en fuego to begin 2014. In a 2-0 win over Roda JC in midweek Dutch Cup action, Aron Johannsson netted his fifth goal in four games, helping to book AZ Alkmaar a place in the semifinal round. Now, with 20 goals scored in all competitions, Johannsson is currently on pace with Jozy Altidore’s record-setting campaign from last season. With 18 matches remaining, he needs just 11 to match the mark of his former teammate for most goals scored in a European clubs season by an American international. ASN Editor-in-Chief John Godfrey recently penned an editorial predicting Johannsson to start in the World Cup opener against Ghana. Considering his current form, you will get no arguments from me.
Roda AZ Aron Johannsson by goalsandmore Pulling double duty for Club Tijuana affiliate Dorados in Copa MX action Wednesday, Paul Arriola found the scoresheet once again in the club’s second consecutive 3-1 win over Estudiantes Tecos. Putting in a full 90-minute shift, the 18-year-old Californian found the back of the net late in the first half, putting home a simple back-post tap-in for the eventual game winner. His two goals lead the tournament so far and have Dorados sitting atop Group 6 with four matches remaining. Former under-20 talent Alejandro Guido also saw the field, playing 24 minutes in the win. Arriola and the rest of the American Xolos face Morelia on Friday. Staying in Mexico: Congratulations are in order for former under-20 forward Daniel Cuevas, who made his professional debut with Liga Ascenso side BUAP Lobos during midweek Copa MX action, playing 23 minutes in a scoreless draw with Veracruz. He has yet to feature during league play but if his inclusion in the cup squad is any indication, a first-team appearance could be fast approaching.

It’s probably not a great sign when you are an almost 35-year-old professional athlete and the pain in your thrice-operated-upon (in the past year!) knee is being described as “persistent." Sadly, this is where we find Steve Cherundolo. According to the latest reports, the veteran defender has been unable to fully recover from recent procedures and is once again training away from the team. A troubling sign given that he has managed only one appearance for Die Roten in what is now his 14th season with the club. It appears Cherundolo could be staring down the light at the end of the tunnel of a remarkable career. Can he give it one more go for the U.S national team and make his way on to a 4th consecutive World Cup roster? The more we see reports like this one, the less likely it becomes. On Wednesday, Jozy Altidore came on as a late substitute during Sunderland’s 2-1 extra-time loss to Manchester United, playing 34 minutes in the second leg of the Capital One Cup semi-final—a match that saw the Black Cats advance on aggregate after a dramatic extra time and a truly bizarre penalty shootout. What else can I say? Being a consistent substitute on a lower-tier EPL side is nothing to sneeze at, neither is a trip to Wembley for a cup final and a chance to go down in club lore. But despite even the most tapered expectations, Altidore’s stay at Sunderland remains a disappointing affair. The transition from goal-happy Holland is not always an easy one, but a less-than-stellar record of two goals in 26 appearances has relegated the 23-year-old to the lower portion of Gus Poyet’s roster sheet for the time being.